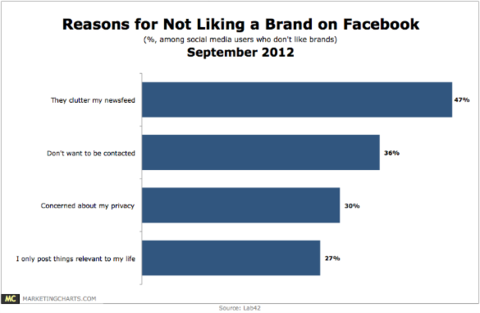 Social media users who don’t like Car Dealers on Facebook are primarily deterred by newsfeed clutter (47%), while many don’t want to be contacted (36%) or are concerned about their privacy (30%), finds Lab42 in September 2012 survey results.

Irrelevant Content Clutter was also the culprit for unliking Dealer Facebook Pages: among the 73% who have done so, dealers posting too frequently was the top reason why. March 2012 survey results from Chadwick Martin Bailey (CMB) and Constanct Contact similarly found that over-communication was a leading turnoff for Facebook likers.

Overall, the Lab42 study finds that 87% of the social media users surveyed like business pages on Facebook. When asked their biggest motivator for doing so, these respondents cited promotions and discounts most often (34%), followed by free giveaways (21%). Loyalty and business trust were cited by 14% and 11% respectively. 77% of respondents who liked businesses on Facebook reported having saved money as a result of their likes.

Still, 46% have liked a business from which they had no intention of buying. Asked why, 52% of this segment reported having liked the business for a free item, while 46% said they couldn’t afford the products, and 24% that they liked the business to help out a friend.

Even so, most social media users appear to truly wish to connect with car dealers and other businesses via Facebook. Of those who like a car dealership's Facebook Page, 82% believe that Facebook is a good place to interact with those businesses. 3 in 4 feel more connected to the business on Facebook, and 35% feel that the car dealers and business owners listen to them on Facebook. This preference for engagement on Facebook is supported by the June 2012 results from an Allstate/National Journal survey, which found that 64% of social media users want to see an increase in companies using social media to respond to customer questions and c....

The Lab42 survey also finds that some product categories discourage likes. 22% of respondents reported having been too embarrassed to like a certain business or brand, most often in the categories of adult novelties, weight loss products and health and wellness products. Car Dealers were not found to be a source of embarrassment and this factor does not influence their Facebook Likes.

The overall results reveal that the leading ways by which car dealers can get non-likers to like them on Facebook are through more giveaways; posting less often; and letting consumers hide the fact that they like the business.

But, car dealers and other businesses may see little value from that engagement, particularly from young social network users. April 2012 survey results from a group of professors showed that almost 7 in 10 Millennials who like a business on Facebook rarely o..., while a February 2012 report from Ehrenberg-Bass Institute revealed that just 1% of Facebook users who like big brands such as Procter & Gamble or Coca-Cola actually engage with those brands.

About The Data: The Lab42 data is derived from a survey of 1000 social media users.