Evans, 45, who left Subaru in May, succeeded Jason Knight, who had been running LotLinx since the end of 2012, before the company was launched. Evans says that Knight remains with the company as COO. Evans was quoted in an interview with Automotive News that LotLinx approached him a few months ago while he was still serving as CMO at Subaru.

“It’s really exciting to go from a corporate job to a smaller company,” Evans said. “I’ve been assessing the business model, the go-to-market plan and the new growth strategy.”

It wasn't that long ago when Dean Evans, then Chief Marketing Officer (CMO) at Subaru of America, Inc. turned over the keys to the Subaru "Drive Performance" Magazine accessorized WRX to Dr. Joel R. Anstrom of Penn State University. Since then, Dr. Anstrom has utilized the car in the Penn State’s Graduate Automotive Technology Education (GATE) Program. 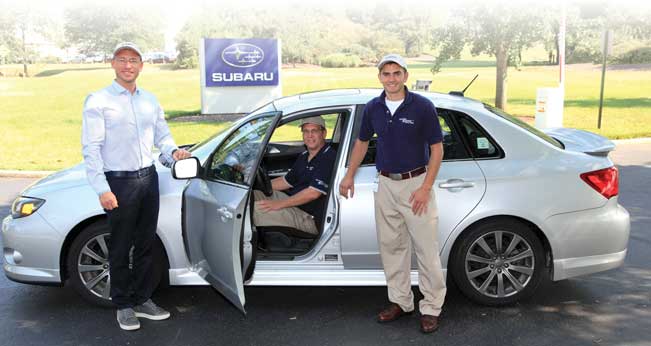 LotLinx was launched last October (2013) to provide car dealers with an inventory marketing platform that directly links online car shoppers from search engines and automotive research sites to dealership website Vehicle Detail Pages (VDP). This strategy and its implementation turns the dealer into a lead provider while helping customers avoid becoming a "third party lead" such as those sent to dealers by AutoTrader.com and Cars.com.

The video from LotLinx that I embedded below will help dealers and automotive marketing professionals better understand the new company's value proposition... And, watching this clip may even shed some light on why Dean Evans would leave his CMO position at Subaru to take on the arduous task of guiding yet another marketing technology start-up to success in the auto industry...

“We are a company built and run by Automotive Industry leaders.”

Which may be one of many reasons why Dean Evans was recruited to replace Jason Knight, whose primary experience before LotLinx was based in the consumer products, and food and beverage industries according to Bloomberg Businessweek. Knight had been CEO of HMR Foods Inc. and COO of Mozzarella Fresca Inc.

Evans started his career in Boulder, Colo., as a Pontiac dealership salesman in 1990. He became a field representative for Chrysler from 1991 to 1996, before managing a dealership in San Francisco from 1996 to 1998.

He began working at technology start-ups in 1998, left Nextag to go to Autofusion in 2000. During the dot.com bubble implosion of 2001, when Autofusion ran out of money, Evans rejoined the auto industry as digital marketing manager for Land Rover’s U.S. operations.

Starting in 2003, Evans began working for Dealix, which was then owned by Cobalt.

When he was fired from Dealix by John Holt, CEO of The Cobalt Group, Dean went on to accept the CMO position at Dealer.com. Dean's work as CMO at Dealer.com helped propel the enormous growth of the company's dealer website market share. After over 5 years at Dealer.com Dean Evans left to take the chief marketing officer spot at Subaru Of America (SOA) in September 2011.

As chief marketing officer, Evans implemented an increased focus on basic digital marketing strategies which had been lacking at Subaru, such as Google paid search ads. He also created "Competitive Conquest" search advertising campaigns that were designed to redirect car buying consumer traffic searching for Subaru's competitors to SOA and Subaru dealer websites... Which sounds to me a lot like the strategy that LotLinx deploys, sort of.

“LotLinx is the first disruptive technology marketing product that I have seen in the last five years that delivers such a compelling competitive advantage to dealers,” Evans said in a statement. “The metrics prove that VDP advertising should be prioritized ahead of paid search, third-party lead buys and targeted display spends because it presents consumers who are lower funnel at a lower cost.”

During his Automotive News interview, Dean Evans stated that while he hopes to eventually return to automotive retail, he see the technology that LotLinx is developing as being vital to auto industry progress. Because of the disruptive nature that Evans sees in the LotLinx approach, he wanted to seize the opportunity to participate in the automotive marketing evolution that LotLinx will accelerate.

“When I saw this emerging technology coming up … it was something retail really needed,” Evans said. “I wanted to go back to the technology side and go though another wave of evolution.” 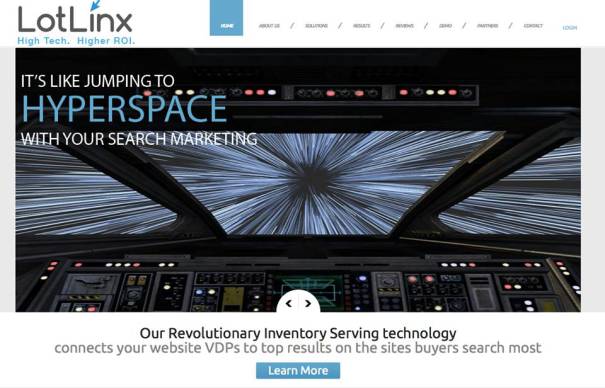 I have personally known and dealt with Dean Evans since his days at InvoiceDealers.com and Dealix, where he impressed me with his willingness and ability to take effective action. Since those days we went on to compete with each other, with me serving at ADP Dealer Services while Dean was at Dealer.com. Regardless of the heated nature of our two company's competition for OEM and dealer business, Dean and I were always willing to call and speak with each other to discuss issues involving our teams and continue the good natured relationship that had been established prior to our roles at ADP and Dealer.com.

It is exciting to see an automotive professional as capable as Dean Evans has proven himself to be, join a tech startup such as LotLinx. I wish Dean Evans all the success he can handle in his new role at LotLinx... and I would also like to congratulate LotLinx for their success in convincing Dean Evans to take on the challenging role of CEO at a technology start-up in the car business.

Dean Evans can be contacted at the LotLinx corporate offices by calling (510) 858-0197 or by email t dean@lotlinx.com... The LotLinx team is listed below, as shown on their website www.LotLinx.com.

You're only as strong as the tools and processes you have in place. Humans are interchangeable. That's my opinion, you stick with yours.

In regards to your comment about who is running Lotlinx, perhaps you don't care, but I do and so do many other people who have a relationship of trust built over many years with Dean Evans. In my experience, who runs a company is most definitely relevant to using that company's products and services.  Would you rather buy oil off the black market from ISIS, or some good American light sweet crude from Oklahoma?

Guess what? @ WheelsTVNetwork, that's against Googlebot's rules and lotlinx, will suffer / be penalized because of it, if they are pushing users to vehicles different than the showing.

This isn't rocket science, BTW. Could care less who is heading it.

The video demo of this product is very misleading. The demo video search for Audi A4 shows results for Clearwater, FL then clicks through to show VDP for Audi A3 in Des Moines, IA... ?

I think the overall presentation and product is good, but the product demo video is faked. Not very convincing IMO. Then again, perhaps the average viewer wouldn't notice this. I tried to replicate the actual experience on Aol Autos for the specific search criteria (year/make/model/zip/dealer) and was lead into lead traps on Vast.com or Cars.com.

Also, there's a strong movement around dealers not syndicating to 3rd party sites because they can drive traffic to VDPs on their own (see Manny Luna's comment). I assume this will start to affect LotLinx business

Lastly, the consumer still needs to fill out a lead form on the VDP (or make a phone call) if they want more info. I understand that the consumer gets one step closer to the dealer, but the idea of a lead form should not be forgotten.

I look forward to following their success and there will certainly be competitors popping up in no time.

@Ralph, super! I like the concept. Any tool that helps with quality backlinks and offers is great. However, that doesn't mean it will not have competition or current platform that do much of the same.

Alexander, and just think about this... LotLinx didn't ask me to write or post anything, nor have they ever paid ADM, AMP or myself a dime in sponsorship or advertising fees. I was only trying to show the company that an old friend just assumed leadership of in the best light possible because I like what they do for dealers and believe they have a powerful bundle of technology and services. In my opinion, you will post negative comments and derogatory statements about anyone other than the company you work for.  At least LotLinx impressed me enough to post the article above without compensation or request.

@Tyson, there will be when we finish our deep linking / user preference (which rank) project. Ha ha!

@David Metter, easily, because that's what this place is, did you not see the long list of their services and staff, LOL!? Disruptive technology, blah, blah, blah...

Comment by David Metter on July 10, 2014 at 5:34am
How did an announcement about one of our industry leaders turn into an infomercial for other products and services :). Come on gang..can we take a minute and just congratulate someone for trying to make rain?

I will start it. Congratulations Dean. We saw what you did with Dealix, Dealer.com, and Subaru. I look forward to similar changes at LotLinx. By the way, I love the line above about John Holt (not the good John Holt that is with LotLinx) firing you. I see how that's impacted you :).