I had thought the days were behind us. Call it a hope, but I believed that the majority of businesses who were active on social media had pushed beyond the plague that once filled our feeds - the worthless post. I was wrong.

It was while auditing an account that followed numerous car dealers on both Twitter and Facebook that I came across the reality of the situation. There are still plenty - over half from the sampling of several hundred that I examined - that were posting the type of "content" on social media that drives people to unfollow, block, or simply ignore them. Recently I've been posting some advanced business social media tips, but it's time to take a step back and go over one of the basics...

If you're going to ask people to do anything at all on social media, whether it's to click on a link, share a post, or engage in any way at all, give them a valid reason to do so.

Don't get me wrong. I realize that social media is still new to many. I realize that not everyone is learning the best practices that it takes to make it successful. I was simply taken aback by the numbers of businesses that were making this profile-killing mistake. In the example above (not the worst example, mind you, but after seeing so many this was the one that was closest to the top for a quick screen capture), the dealership is asking people to do something. They want their fans to browse the inventory of a particular new vehicle. The chances of anyone clicking on this link are miniscule compared to the chances that they'll see this post and unfollow the dealership.

This needs to stop...

Give them a reason

There are much better ways for a dealership to use social media than to try to get clicks to the inventory, but if you must do it from time to time, make sure there's something enticing to make it happen. For example, a Tweet might say...

Social media is about now. If people wanted to browse your inventory, they'd go directly to your website or find the car they're seeking on Google. There's no chance that seeing a Tweet or a Facebook update telling them to click to your inventory for no reason will ever work. Give them a reason.

Of course, posting links to inventory is not a best practice. It's something that should be done sparingly (if at all) and only when there's a valid reason to do so. Your goals with social media are many, but two of the basics are (1) improve your branding for future considerations, and (2) catch people in market with something compelling.

Compelling. Give them a reason. Otherwise, the seconds it took to post a meaningless update could have been better spent reciting a limerick.

I appreciate all the quality traffic I can get :) Thanks J.D.

Reason 1 is good because it re-exposes them (they might see something they didn't see before) or validates a selection they've already made. Reason 2 is great, of course. Reason 3 doesn't hurt and it gives you a quick new opportunity even if it's a slim chance.

Point is that 20 visitors gives you a chance to sell an extra car or two a month. Just as they wouldn't have stepped on the lot if they weren't interested in buying, they wouldn't click on your Facebook inventory for no reason. No extra cost. No extra effort. No potential for damage. Win-win-win.

I'm not an expert so, tab and app, same difference to me. :)  We are DealerRater Certified and those are the apps we use. The traffic for each of those apps varies month to month, but generally there are about 20 clicks on them combined each month.

I'm a big fan of what SocialDealer is doing, as well. IMO, a more efficient way to integrate inventory, works well with most outbound, inventory feed systems.

Comment by Ralph Paglia on December 18, 2012 at 12:35pm
Tabs have been history for a bit... Apps are sort of like what tabs were, but different. Cathy, if you are DealerRater certified, you may want to try their Facebook App for dealer inventory. They have done a nice job of making it work well, and their are several skins available. I have some success with the DR inventory app on Facebook, but their customer reviews app is very slick!

No, I don't ever ask anyone to click on it.

Cathy, I think that all depends on how popular your page is, like you've stated have you been attempting to get users to click on it?

JD, thanks for your insight.

Tabs are fine. Not very useful but no damage done. They don't clog the feed which is the risk with bad content.

We have a tab for Inventory. I've never asked anyone to click on it and it gets about 10 views a month. Not a ton, but the tab remains there for those who would like to see.

JD, I agree with the premise of this post. Far too many dealers allowing 3rd party groups or uniformed employees to make silly, senseless social media posts. Bad form, IMO.

Although, I'm interested, how do you feel about Facebook apps that allow a dealer to pull in their entire inventory and display it via a TAB? It's not intrusive, it just gives a current or potential customer the option to look at their inventory via Facebook. 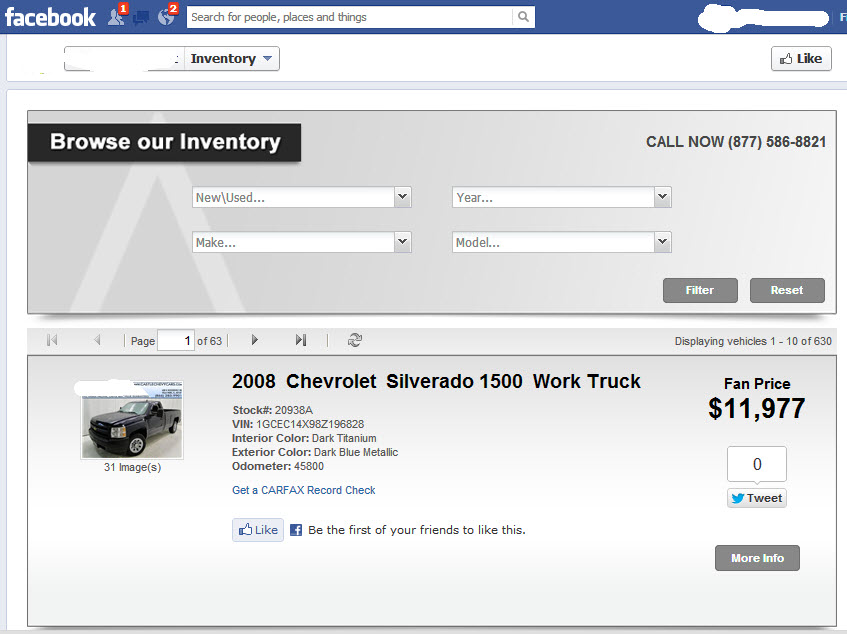