Android or iPhone? Help select an ISM's next phone 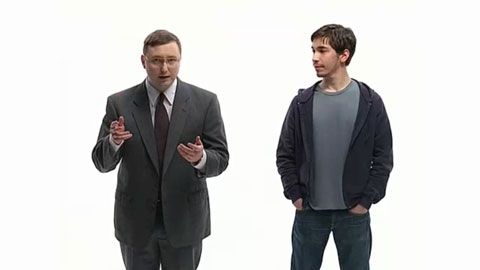 So, here's my dilemma. I get to replace my smartphone in the next month or two.

I am an internet sales manager.  I take calls, I take photos, I check email and, of course, I have a mobile CRM tool.

I use a few apps, too.  Like vAuto, and the Chevy mobile workbench.

I use the maps and navigation.  I'd do my walk-around videos with it too, if the audio was better.  I'm using a Flip camera competitor, instead.

You know what I do.  You're probably an internet sales manager, too.

I don't think the choices are as easy as in the days of PC vs. Mac. (Was that ad campaign with Jon Hodgman and Justin Long not the greatest?) Both Androids and the iPhones are easy to use, intuitively functional.  I've had an Android for the past three years, actually, but I've been an Apple guy since... forever.  I still own a fully functioning Mac Classic that I bought in 1991 (and I put to use laying out direct mail pieces as late '02 or '03), and I've been keeping an iBook clam-shell booted up and running for 10-11 years, I guess, although I haven't used it in about five.  I just can't bear to shut it off.

I didn't have the same warm and fuzzy feeling about the iPhone, at the time I got my current smartphone.  And I had an early Blackberry that I really liked for emailing, before that.  Anyway, we're with Verizon, and I got my HTC Incredible back before you could get an iPhone on Verizon (and it was true what they used to say about AT&T's spotty coverage back in the day).

Now I have the choice, and I've got equal interest in the new Apple iPhone 5, in stores today, and the even newer Motorola Razr Maxx HD, coming soon.  A Verizon Wireless in-store visit hasn't helped.  Product reviews online aren't pointing me in one direction or the other, either.

You, the internet sales folks reading this, you're perfectly qualified to advise me.  Anyway, here's what I'm mulling over: The most important function I use a phone for is plain, old-fashioned phoning.  Actual talking.  And listening.  Don't get me started on the sound quality we take for granted on phones today (or lack of). My hearing ability reflects about 10 solid years of arena rock and hardcore mosh-pit abuse, 1975 to 1985.  It's half gone now, and it isn't coming back.

Then there's battery life -- who's got the edge there?  I work loonnnngggg hours.

I do a lot of web browsing throughout the day.  And typing on the screen.  Is the iPhone's Retina display or the larger-screened Razr a better bet?  Btw, I can't see much better than I can hear.

The first and only negative report about the iPhone 5 (iOS 6) is the Apple-built map and navigation.  I take it Google is better.

Photos -- the iPhone does take better photos, right?  And other social media functions for an internet manager, like managing the Facebook business page run better on the iPhone, right?

One other thought.  I ought to be using the same phone that most of my customers are.  That would be an iPhone (not necessarily the latest, but most everyone will be upgrading the operating system if not the hardware over the next few months), right?

Which phone do you use now?  If you were choosing a smartphone in the next month or two, which would you choose?

iPhone 5 is getting panned by the technology community both on battery life (quoted as standby on the specs but apparently usage dictates otherwise) and the concerns for the HUGE ramifications Apple Maps is going to have for mobile tech over the next year. I'm sure you've read plenty that Apple Maps just simply doesn't work, and since maps are one of the most used features on mobile phone, it doesn't bode well. I'm sure they're going to patch it and obviously everyone will still buy it in records, but Google is now dead on iPhones. I'm waiting to see a writeup on the iPhone 5 that tells us what ISM can and can't do with it for Google, AdWords, Analytics, etc.

I'm an open and honest Android fanboy. I love that you can customize everything. Apple is great for people who just want one option, one keyboard, one email client, etc. If you don't like the stock system you're stuck unless you want to void the warranty. Android allows you to change the keyboard to Swift Key 3, Swype, or a dozen others, change the unlock screen, messaging client, etc.

I recently got the Samsung Galaxy S III and I recommend it wholeheartedly. I use a program call AirDroid to send all my text message into a browser window so I can type them much faster with a keyboard. AirDroid works best when your phone is awake, so put it this way: I leave my phone on WiFi only all day and after 9-10 hours, I still have about 30% battery life left when I leave. However, I don't really know that much about the Motorola Razr Maxx HD.

As someone who follows mobile tech daily, it's obvious to me that iPhones are always playing catch up. Features that have been stock on Android for years are only just now being introduced on iOSX. Android is open source so all developers have complete access to the system to innovate and build out new features and functionality daily. iOSX is black boxed and developers have to get permission for any new feature they want to push out. Just something to consider.

Basically, I think most people in digital marketing should be worried about the ramifications the iPhone 5 will have on their daily workflow if they do a lot of work with Google. I can't talk intelligently about it obviously since it comes out today. But I think most users should be very wary about it. And consider an Android!

Put it this way, this is the back of my MacBook Pro.

I use them both, and find most of my digital marketing effectiveness is accomplished via apps and integration with my iPhone 4S... Looks like the iPhone 5 may be a winner as well.