Why video is key to your internet future.

The world changes so quickly, sometimes you just wish it could all pause for 5 minutes!

Everything moves with such breathless haste, that often the changes you’ve just caught up with seem to already be on the way out! The Internet of course has driven a great deal of this change, and has been the most revolutionary thing to happen since the wheel, fire or maybe sliced bread. It’s capacity to enable the creation and spread of information is staggering:

IBM calculates that 90% of the world’s data has been created in the last 2 years alone.

What is the Internet made of?

The Internet has changed the way we live, communicate and buy forever. There isn’t any going back. We all know that the internet is important, but what often gets left out amongst the mind-boggling numbers and ‘Big Data’ stats is the question: What is it made of?

Here is an example from IBM: ‘Every day 2.5 quintillion bytes of data (1 followed by 18 zeros) are made globally’.

Now, for nearly everyone, that stat is fairly meaningless. It sounds like a lot, but how much is it? Is that all videos of cats or dogs? Is it all pretty much baby photos on Instagram?

Well to store 2.5 quintillion bytes you would need 22,737 human brains. So that’s an awful lot of data, and no, not all of it is cat videos. A lot of it comes from Social Media interactions, cell phone signals, climate change sensors, pictures and video. To break it down further, here is a more manageable Intel image of what happens in a typical ... As the trends show Social Media interaction is big, but the fastest growing Internet consumable is actually video. By 2015 you would need 5 hours just to watch all of the video uploaded in a minute. 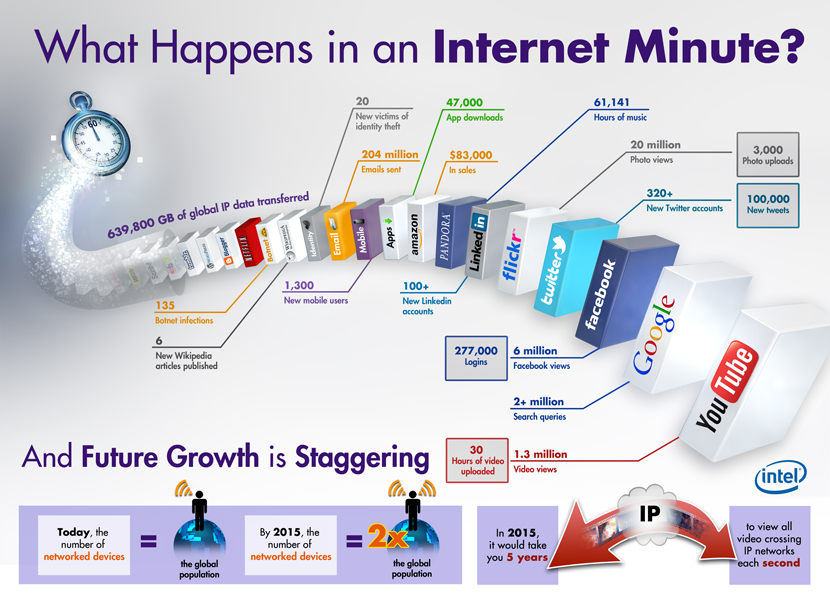 Don’t Pick a fight with a Penguin

As video usage and consumption is increasing so rapidly, the giants of the Internet have responded accordingly.  Search engines love video content and have prioritised it in their latest search algorithm updates. As video takes time and effort to produce, it is highly relevant to the consumer and so sites with it are duly rewarded. Google, in particular with Penguin 2.0, has given ranking boosts to sites with high-quality content, and punished those associated with low-grade content and spam. Gforces, an automotive marketing firm, emphasises that Dealerships ...

However, video production doesn't have to be expensive or time consuming. Even video pros, like Wistia admit that modern smartphones and tablets, can do a great job, allowing you to gather video and photos for your website with ease.

People are increasingly fascinated with video in social contexts on the Internet. With video both great and small being distributed everywhere by companies like Vine, Vimeo and Youtube, people are hooked on video. This has led to customers increasingly relying and expecting video to help in their purchase decision making processes. Because of this  internet based trends like- showrooming, digital dealer visits over brick and mortar, and virtual showrooms- are only going to increase.

As the facts and figures from the biggest computer data companies in the world show- Video is the present and the future.

Increasingly important in SEO weighting, it puts your website above your competitors; improves conversion rates with leads; produces greater buy-in from prospecting, and provides a fun, familiar medium to channel your company message or product.

Don’t pick a fight with the Internet Penguin. Video provides you with the most versatile toolkit available for both now and for whatever tomorrow may bring.

*This is one conclusion drawn from neurological research. It is contested by other theories.