Why dealerships must use texting in 2018 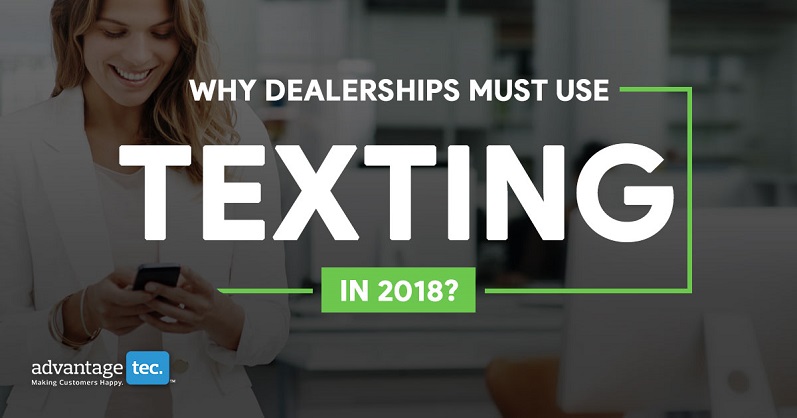 Customer satisfaction is one of the most important ingredients for your dealership success. It is plain simple: if you are doing it right, your CSI scores will go up. And if you are not, you should be thinking how to increase it in the future.

Wanting to research the quality of automotive service in the US, in March 2017. J.D. Power released a report of the CSI Study they conducted during 2016. The report reveals significant improvement, with Buick and Lexus surpassing the competition. Moreover, the study showed that “service departments should brace to use text messages more often to reach their customers more effectively.”

On a 1000-point scale, J.D. Power study suggests that, in comparison with 779 in 2015, service quality reached a score of 805, which is a significant rise considering that the project was redesigned in the former year. Growth was evident in other four measures: service advisor, service initiation, service facility, and vehicle pick-up.

The study also showed that customer service rose from 800 to 813 and Chris Sutton, vice-president of J.D. Power, says that “[p]roactive communication with the customer, especially while the car is being serviced, is one element that has a direct influence on loyalty.”

Also, loyalty was another compelling factor. When asked will they return for paid service, 55% of customers contacted by phone said they “definitely will” and 67% when receiving text message updates.

The age factor was also alluring. Since 2015, preference for communicating via SMS has boosted from 3% to 6% for all age groups. Namely, 41% of Gen Y1 and Gen X customers prefer texting, whereas 25% of Boomers and 10% of Pre-Boomers also want their dealerships to communicate via SMS.

Sutton said that “it’s not surprising to see the preference for receiving updates through text messages continue to rise, but only 3 percent of customers indicate they receive SMS updates. Correcting that disconnect by adding more text message capability should be a priority with a service operation.”

Another exciting aspect of the study is the impact of technology on satisfaction. Namely, the study found that customer satisfaction was improved when more service advisors used tablets and other smart devices from 17% in 2015 to 24% in 2016, whereas online scheduling also rose from 9% to 13% over the same period.

2017 J.D. Power’s Customer Satisfaction Index study indicated the following, among other things: in the period from 2015 until 2016, service quality improved and choosing the channel of communication with customers also made an impact on customer loyalty. The use of messaging and smart devices developed a stronger relationship between dealership customers and service providers, and among all age groups, the preference to texting was evident.

What you can do in 2018 is to learn from this and improve communication with your customers by using text messaging tool.

AdvantageTec proudly presents you advantage txt. – market leading, simple, intelligence texting solution. This is the best SMS tool in the US that increases sales, CSI scores and retention while decreasing phone calls by 25% or more. We are actively committed to making dealership customers happy. Discover our unique texting technology and create trust and value at your dealership.