VISIT THESE LITERARY LANDMARKS BEFORE SELLING YOUR RV

I grew up in a small New Jersey town just an hour’s drive from NYC. But if given a choice, would I want to be here? No, I won’t. And if you are like me, you won’t either. I would rather live in my favorite storybook, sharing space with the characters that I love so much. Well, I know that’s unrealistic, but that can be achieved in a way. Do you know how? By talking a trip to all those places made famous by some of the most-loved authors. In case you are wondering, there are many such places in the US. When I decided to sell my RV online, I visited some of these places, and the experience was awesome. Just imagine this— you may never get an entry to Gatsby’s house or his parties, but how would you like visiting the birthplace of Fitzgerald? Cool, right? If you have an RV, consider visiting the following literary landmarks with your family and friends before you sell off your motor home:

Are you a John Steinbeck fan? If yes, consider visiting the author's childhood home and birthplace. Steinbeck was one of the most revered 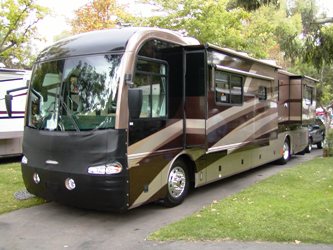 US authors who penned 27 books including five short story collections, 16 novels and six non-fiction works. Visit the Steinbeck House in Salinas, California. This place remains open for tourists from Tuesday to Saturday. Steinbeck's childhood home, which was constructed in 1897, has a Queen Anne style Victorian flavor. The author's family occupied it in 1900. John wrote the book “Grapes of Wrath,” and most of his writings focused on economic and social problems troubling America at that time. Though he was enrolled at the Stanford University in the year 1919, he left it in 1925 without attaining any degree. The National Steinbeck Center in Salinas is one of the greatest literary landmarks in the US. Make sure you visit this place without fail.

If you've read Jack London's books, do not forget to visit two of the author's most favorite haunts. The Beauty Ranch in Glen Ellen, California has a cottage as well as a farmland, where London spent his time writing and farming. The second popular hangout is an isolated tavern and lodge where the writer completed his work “Valley of The Moon.” You can visit this lodge in Creek, Oregon. It was also a favorite spot for many Hollywood celebrities like Clark Gable, Carole Lombard and Orson Wells.

Mr. Eugene lived in Danville, California, and was well-known for his renowned play, “The Iceman Cometh.” Even if you're traveling in your RV, you will have to take the National Park Service shuttle to visit the author's residence. These shuttles are available from the town of Danville. The house is part of a beautiful 13-acre property that also includes a barn and attractive pathways. The barn is a popular theater now.

This place is associated with Beverly Cleary, an American writer who wrote 30 books for children as well as for young adults, which sold 91 million copies till now. She was born and brought up in the state of Oregon. She still lives and is 100 years old. Her first book was published in 1950. While RV-ing, make it a point to visit the Beverly Cleary Sculpture Garden in Grant Park. You'll get to see attractive bronze statues that resemble the favorite characters from Beverly's books. This is a must-see spot for you and your family. While you are exploring Portland, take a walk down the roads where you can find the author's books set between the Hollywood Library on NE Tillamook Street and the nearby areas.

If you love reading William Falkner's books, then your trip would not be complete without a visit to his Rowan Oak estate in Oxford, Mississippi. William and his family stayed here for more than three decades, and the author penned most of his books including the “Light in August” at the Rowan Oak estate. The author loved to spend the afternoons here building the terrace and wiring his home. It is believed that Faulkner wrote complex plots of his novels on the back wall of Rowan Oak. When he completed writing his book, Faulkner would paint the wall and start writing again. Take a tour of his home at just $5, and you'll be delighted to see a plot of one of his stories still visible on the wall. It's a 29-acre property open to the public throughout the year.

Have you read “Gone with the Wind?” If yes, you must visit Mitchell's apartment in Atlanta, Georgia, which the writer called, “The Dump.” She completed her epic novel for six years. Mitchell loved sitting at her living room table, and worked on her book. She received the Pulitzer Prize for her book in 1937. It was adapted into an American movie in 1939, and this made Mitchell one of the most celebrated authors in the history of American literature. You can take an Atlanta History Center operated tour of the apartment. It's open to tourists every day excepting holidays. As far as the Atlanta History Center is concerned, this is another famous landmark that you cannot afford to miss.

You can visit Hemingway's famous second home if you happen to be in Key West in Florida. The beautiful location and tropical beaches inspired Hemingway's productivity during the time he spent his time with Pauline, his second wife. Most of the author's books were penned from his bedroom upstairs. Hemingway moved to Cuba later with Martha, his third wife. The author received the Nobel Prize in Literature 1954 for his creative prowess and proficiency in the art of narrative. Take a tour of his home, and get to see 40-50 cats, which are believed to be the direct progenies of Hemingway's own pets. Visit the author's home, museum and garden, which are open to tourists almost every day, but make sure you visit this place when there is less rush.

Did I miss out any? I sure did. Why don’t you let me know your favorites? However, this list is pretty impressive, right, and surely something you must visit before you sell your RV online. Here’s a bonus idea! Make a short video of this trip and upload it with your ad. Interested and genuine buyers will instantly get hooked to this travel video, and consider inspecting your rig in person.