The folks over at DiGiorno Pizza seem to have given someone their Twitter password and said, “Go for it!” They are engaging people in the Twitter-verse in ways that would make many companies cringe. I’m fairly certain that football fans are in their target demographic so it makes complete sense that they are engaging football fans – both real and fantasy. However, they aren’t just talking to them about stats or complimenting great performances. They seem to have an affinity for trash talking. Here are a few examples:

They aren’t satisfied with just football fans, however. Recently, NBC attempted a live performance of The Sound of Music. Guess who was there watching, and tweeting, right along with fans. Yes, DiGiorno Pizza was participating and, in the same manner as their football tweets, was having a grand old time. 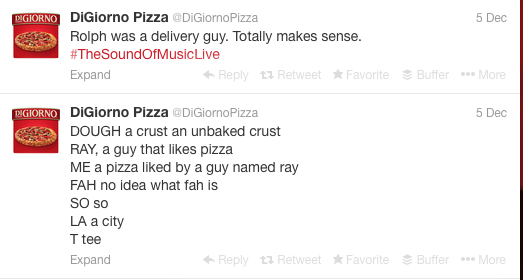 Companies protect their brand with passion. There have been more social media mistakes, errors, and insensitive tweets sent by social media marketers that, in many cases, social media content must go through a gamut of approvers before ever seeing the light of day. That fear doesn’t appear to be shared by DiGiorno, however. Unless the social media person had an approver standing over his or her shoulder watching the Sound of Music Live and approving content on the spot, someone was winging it.. and winging it well.

The brand’s social media activity has generated buzz from their football antics by the LA Times with their article “Who knew? Digiono pizza is a smack-talking, possibly drunk wiseguy on Twitter.” During the Sound of Music Live, their Twitter account slowly began trending from East Coast to West Coast starting in New York, then Chicago, Brooklyn, Austin…and on.

The amusing tweets captured the attention of Twitter users all across the country with reactions like this:

Their Sound of Music Live activity (piggybacking on the hashtag used by the show) again captured the attention of the LA Times as well as The Hollywood Reporter, Buzzfeed, Adweek, Mashable, Bloomberg Businessweek, NPR, The Today Show… in fact, Google returns almost 10 million search results for the search phrase “digiorno pizza tweet sound of music”.

Sometimes it pays to be a risk-taker. Whether or not your company image and personality is in harmony with this kind of social media chaos is entirely up to you. All I know is that last Thursday, the hills may have been alive with the Sound of Music but Twitter was alive with pizza.