The Red or Blue Pill Is No Longer a Choice 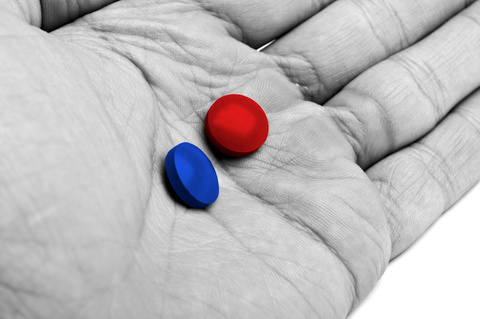 In the popular science fiction movie, The Matrix, the hero Neo is presented with two options by the mysterious Morpheus – the red pill or the blue pill. By taking the red pill, Neo would be enlightened into the real world. Whereas, if he chose the blue pill, he would remain peacefully ignorant of reality and continue to live in the fantasy world. If you’ve seen the movie, you know that Neo chose the red pill and was awakened into a future world in which technology had taken over and humans were… well, I don’t want to spoil it for you if you haven’t seen it.

My point is this -- as dealers we’ve been taking the blue pill for far too long. Most other retail businesses are embracing technology and have a huge head start on catering to the wants and desires of today’s consumers. While the auto industry has stubbornly clung to the old ways of doing business. Wall Street finally took notice and, once Warren Buffett entered our industry, things started changing. Not necessarily for most dealers, but for the corporate Wall Street owned retailers who DO use the same technology that works in other retail sectors and apply it to the automotive industry. They’re figuring out and solving problems that we’ve ignored for too long. This has opened doors for tech start-ups to encroach on the market share of dealers who normally wouldn’t have much to worry about.

Think about the evolution of marketing in our industry. Let’s take vehicle inventory marketing as an example. It wasn’t too long ago that one or two pictures of a vehicle on a VDP or listing site was acceptable. Then progressive dealers started taking 40 or more pictures which quickly became the norm. Then video was introduced, beginning with stitched video and progressing to live video walkarounds.

What’s next? Well take a look at most high-end retailer’s websites. When you look at a product page (the parallel of our VDP), they provide the ability to zoom in on a picture to look at small details. Many also offer 360 degree interactive photos. I know what you’re thinking: “We don’t need that!” But guess what? You are wrong. Don’t believe me? Just check out Carvana’s website and one of their VDPs. They offer 360 degree interactive views of each vehicle on both the outside AND the inside of the vehicle!

Now, using this example, why should you care?

Because that’s what consumers want! Look, it wasn’t all that long ago that NADA told dealers if they captured 2-3% of consumers on their websites they were doing a good job. Well, I’m here to tell you that result is no longer acceptable.

Many vendors want to sell dealers MORE traffic to their website. However, the fact is that dealerships already have enough traffic to improve their business margins – by a huge amount. The average dealership will get 10,000 visitors per month. That means if they are capturing just 2-3% of these, most are missing out on 9,700 of their website visitors!

So, that being the case, how do you get those 9,700 people to stop on your website? Through technology… just like every other retailer. By using technology, you can impress your website visitors enough to make them stop.

Put yourself in their shoes. Why are they passing through? It’s because you aren’t giving them a compelling reason to stop. Photos and video are great, but they don’t give consumers the ability to virtually walkaround the vehicle in a continuous motion as if they were on the lot.

The broken images don’t let them see that little dent, scratch or other imperfection. Or, even better, the fact that there aren’t any. What do you think is going to increase their interest in your vehicle? The ability to see its actual condition!

Online transparency in your vehicle merchandizing is more important now than ever before. The technology that other retail sectors use to allow consumers to spin the images and get 360 degree product presentations is available right now for YOUR inventory. Not only is it available, it’s also cost effective and very easy to use. In fact, it’s so easy you will probably find you no longer need that outside photo service and actually save money while providing a more transparent and better customer experience.