Social Media Will Replace Your Dealership! 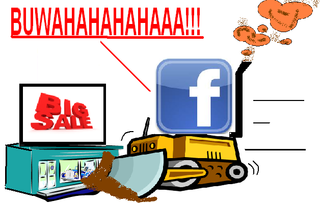 NO, it won't. I'd have to be making a humor piece to take that stand--however, I'm paraphrasing, in my title, an actual quote from a press release this week from Maritz Research:

"Contrary to the growing belief that social media will soon replace traditional automotive dealerships, a recent Maritz Research New Vehicle Customer Study (NVCS), revealed that the salesperson at the dealership is still the most influential source of information for car buyers. In fact, salespeople were ranked significantly higher in 2011 than in the past five years."

Well, if there's a "growing belief" that social media will soon replace traditional automotive dealerships, I've never seen it or heard about it. It would be a stupid belief, a stupid statement, and . . . well, I don't hold this press release in too high regard, either. OF COURSE the salesperson is the #1 influencer, and I'm glad to see the rise from 2011 for that--but the sales story for the dealership is not just what the salesperson can do with the customer RIGHT IN FRONT OF THEM, it's about HOW that customer selected the dealership and/or salesperson to visit. And that includes the rising influence of social media in the CHOICE OF DEALER.

We have whole conferences--PCG, Digital Dealer, AutoCon, Internet Battle Plan, etc.--around the Internet's position. This kind of opening line in the Maritz release is revealed for what it is by realizing that it could just as easily claim "Contrary to the growing belief that The Internet will soon replace traditional automotive dealerships". Gosh, how smart does THAT sound?

In this case, it's made worse because so many folks might not comprehend that the SECOND highest influencer on that list includes social media. It would've been nice to have seen that properly, and positively, highlighted in this release. Well, my more-true quote today could be "Contrary to the growing practice of propaganda replacing actual press releases" . . . anyway, the good news of the Maritz research that the salesperson is more valuable to the buyer than last year is REALLY the message. And a very good one.

I'm very disappointed in Maritz. And I'm VERY happy for the salespeople! :)

P.S. Here's a link to the release (unless they change it now): Maritz Research Press Release

It's not the first release I've seen like this, and not the first time I've seen Maritz and others do similar things.  On the other hand, I have seen some pro-social-media folks say SOME things about social media that make me blanche, as well.  Just nobody I know or have read has EVER said social media was replacing dealerships! That was a new low, for me, in "strawman" propaganda on this point.

After reading that article several times, I do believe it was intentional which would make it misrepresentation.  They obviously wanted the results to fit their agenda.

Exactly, Tom.  It was a misrepresentation of the statistics, to me, though.  :)