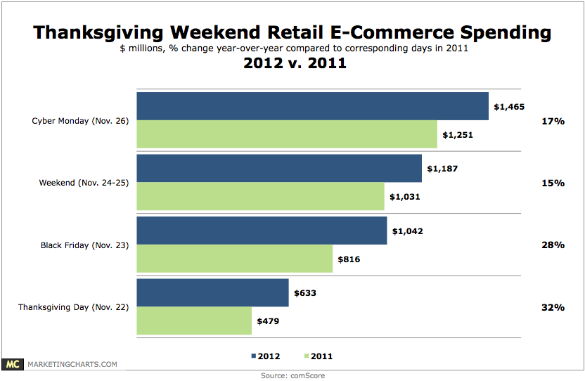 American spent $1.465 billion online on Cyber Monday, up 17% from last year, making it the biggest day for US e-commerce in history, according to the latest data from comScore. It also joins Black Friday as the second day of the season to pass the $1 billion online spending mark. For the holiday season-to-date (November 1-26), Americans have spent more than $16 billion online, representing 16% growth from the same period last year.

Cyber Monday’s results differ, according to various reports, though they all see solid growth. For example, while a new report [pdf] from IBM agrees that Cyber Monday was the biggest online spending day ever, it sees online sales as up by 30.3% year-over-year. Results from the Chase Holiday Pulse put Cyber Monday’s online sales growth at 21.8%, while Adobe reported growth of 17%, in line with comScore, but to a larger total of $1.98 billion.

Mobile Makes A Big Dent; Social Not So Much

Mobile has been forecast to have a strong influence on the holiday season, and the figures appear to bear out this trend. According to the IBM study, mobile devices accounted for 18.4% of site traffic on Cyber Monday, up from 10.8% a year earlier. Mobile’s percentage of total sales stood at 12.9%, almost double last year’s 6.6%. Of note, while the iPad dominated mobile traffic on Black Friday (see Black Friday link above), the gap between it and the iPhone was much narrower on Cyber Monday. The iPad accounted for 7.1% of total site traffic, just ahead of the iPhone (6.9%), but further ahead of Android devices (4.5%).

The Adobe report sees an even greater influence from mobile devices. That report finds mobiles accounting for 22% of total sales on Cyber Monday, double the result from last year. Adobe also sees tablets having a far greater role on Cyber Monday, accounting for 14.1% of sales, compared to 6.8% from smartphones and 1.1% from other devices.

But while mobiles made their mark, social media did not. The IBM results show social media sites referring just 0.8% of site traffic on Cyber Monday, and accounting for just 0.41% of total sales. As with the Black Friday results, Twitter referred no traffic at all, while Facebook referral traffic accounted for 0.69% of the total on Cyber Monday.

Retailers certainly went all out trying to attract visitors on Cyber Monday, according to Marin Software, which found them spending 39% more on paid search this year than last. The result? While impressions dropped by 6% year-over-year, clicks increased by 26%.

Details from an RKG report also indicate that paid search investments paid off: same-site sales from the paid search channel were up by 42% from last year among RKG’s clients.

Similarly, a new report from IgnitionOne finds paid search spending and impressions up 29% year-over-year throughout the Thanksgiving weekend, leading to a 23% increase in revenue. For Cyber Monday in particular, spending was up close to 35%, with impressions and transactions up a similar percentage, and clicks and revenue up by around 25%.

Finally, a study from Kenshoo finds that search ad spend was up by 51% year-over-year on Cyber Monday, leading to a 66% increase in impressions, a 57% increase in clicks, a 52% rise in conversions, and 44% growth in sales revenue.

About the Data: The IgnitionOne data comes from one in a series of reports from IgnitionOne, which have tracked more than 91 billion impressions and more than 2.3 billion clicks on Google and Yahoo!/Bing search networks, Google AdEx, and other display networks from January 1, 2006 through November 26, 2012.

The data analyzed by Kenshoo reflects a representative cross-section of Kenshoo clients (advertisers and agencies) managing paid search programs for the retail vertical in the United States with active campaigns tracking impressions, clicks, conversions and revenue over the 12+ month period from November 1, 2011 through November 26, 2012. This index includes all major retail categories such as, but not limited to, electronics, books, apparel, appliances, shoes, sporting goods and more. The data set covers 10+ billion paid impressions and clicks on search engines like Google, Yahoo!, and Bing that delivered more than $500 million dollars in online sales revenues during the November 2012 period. All data is accurate as of November 27, 2012 but subject to change as delayed conversions are added in subsequent days. Final figures will be released in the full Kenshoo 2012 U.S. Retail Holiday Shopping Report, available in early January.

Cyber Monday was all about sales and discounts. Perfect time to place your accessories and clothing offers online and mobile with coupons to drive store traffic. Apparel and watches are big sellers.

great stats... thanks for sharing @ralph!

Since this data shows that that Americans are in a "Buying Mood", there has never been a better time to follow up on all your previous customers and generate some vehicle sales!