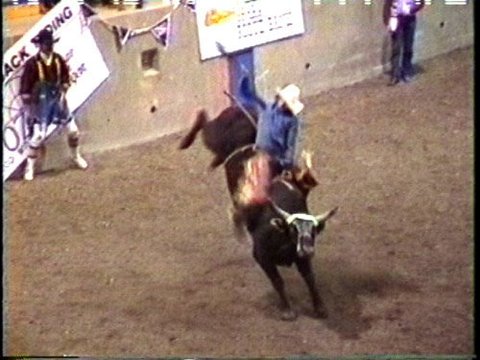 In 1991, a 5’2” 125-pound cowboy stared into the face of Wolfman Skoal. a young 2,000-pound bull with a bad reputation. So bad, in fact, that a $500 bounty existed for any rider that could tame the beast and ride a full 8 seconds. Wade Leslie accepted the challenge. As he mounted the bull in preparation for his ride, the bull promptly lay down in the pen. He considered getting off. But then the bull’s owner reassured him that Wolfman Skoal would perform. Sure enough, once the gates opened, the bull leapt straight into the air like a rocket and preceded to do its best to eject Wade. Wade had different plans, however. He not only succeeded in riding Wolfman Skoal for the full 8 seconds, but also became the first, and to date, only bull rider to score a perfect 100 points in the Professional Rodeo Cowboys Association.

Not unlike bull riding, marketers are constantly creating content that is competing with both their competitors and the platform on which that content is published. Right now, the biggest and baddest bull around is Facebook. One could say that as Facebook grows up, its personality continually changes, forcing marketers to continuously change with them. As it finally enters its teens, this 10-year old has decided that, at the moment, it happens to like video content. In bull riding, judges calculate a score for both the rider and the bull. Riders know that their score depends on both how they ride and how their bull performs. A rider can stay on a bull for the full 8 seconds. But if the bull isn’t rowdy enough to impress the judges, the rider can still receive a sub-par score.  Keep this in mind when developing your content. In marketing, the success of your content starts with the content creator (the rider) and is dependent on Facebook (the bull).

In early summer of 2014, Facebook began releasing in-depth data on video performance. Social media resource Socialbakers eagerly dove into that data in an effort to tame the bull and finally give marketers information that would assist them in their quest for video marketing success. Through the study of 1,000 Facebook pages containing over 3,000 videos, it was found that videos of ~21 seconds long were the most successful. The main metric used to determine a video’s success was its completion rate (i.e.: the percentage of people who watched at least 95% of a video). As in most rules, there are exceptions, yet the in-depth study showed that the longer a video was, the lower the completion rate.

There are many variables that can be used to explain this phenomenon, ranging from attention spans in general, content that’s not engaging, and the bandwidth needed to view a longer video on mobile devices. Not enough time has passed since the release of this data for more comprehensive studies to be done. One thing is certain, however, and that is that Facebook is increasingly choosing to deliver video content to its users’ newsfeeds. The study of Facebook video performance found that ~57% of viewers who started watching a video, completed the video. The Socialbakers study even went as far as to make a preliminary finding that “If this data holds true, Facebook videos are outperforming YouTube videos.” They speculate that the reason for this “could be attributed to more intelligent distribution of videos on Facebook, due to Facebook’s News Feed algorithm doing a better job of matching interested users with engaging videos than YouTube does.”

Keep in mind that these statistics are based on a preliminary study of Facebook video content in general. We’ve found that the money spot for completion rates on videos are between 1-1/2 to 2 minutes long across all other video platforms. The reason for this is that product videos tend to be sought out by a consumer rather than being delivered to them by the platform. We expect that this will remain consistent, as consumers who visit a dealership’s Facebook page to view an inventory video have purposely sought out this content. Consumers looking to purchase a vehicle are willing to make a longer time investment for the simple reason that it is directly tied to a significant expense. Mobile users are statistically willing to make even longer commitments ranging from 2-1/2 to 4 minutes depending on the device.

Any type of content produced by a business has a limited amount of time to capture a person’s attention. Video content has an advantage in that it is the only content that tells a viewer exactly how much of a time commitment they have to by displaying its total viewing length. And if your content is engaging, consumers will give you more of their time. If not, you’ll find them abandoning your message quicker than a bull can throw a rider.

The next time you create video content and stare the bull named Facebook in the eye as you prepare to either submit or be submitted, keep in mind the following: high quality, engaging video content that quickly captures a viewer’s attention will increase the length of time that you’re able to stay on the bull and impress the judges. And just like bull riding, they are the only people that matter.