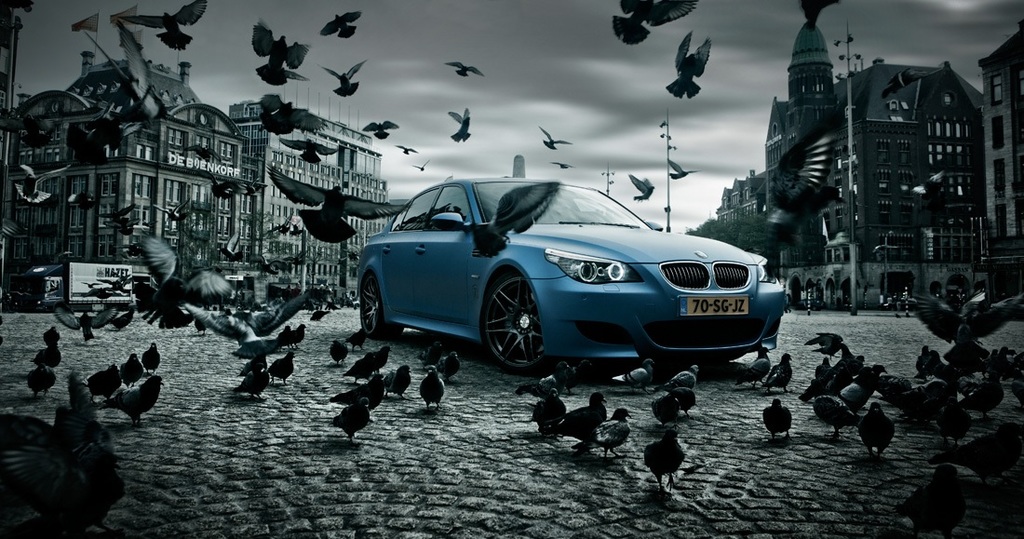 The "unfortunate" fact really isn't that unfortunate, especially for those who are reading this. You see, you can actually do it right, which means that you're going to have a leg-up on the competition. When things are too easy or too well known, they have a tendency to become universally good. When they're universally good, that means that everyone is average.

Image marketing on social media is not about taking advertisements and posting them as images. It's not about talking about your big sale next week in the form of a banner that you post to Twitter or Instagram (though there's a way to do that which I'll demonstrate below). It's not even about taking pictures of happy customers in front of their latest purchase jumping in the air with the caption, "Oh what a feeling!"

Proper image marketing should accomplish some of the following goals listed in no particular order:

It doesn't have to do all of these. It can do one of them really well, a couple of them very well, or knock out three or four of them with a single post. To highlight this, I'll use examples that I found in my Twitter feed just in the last couple of hours. This does not only apply to Twitter; Instagram, Google+, Pinterest, and Facebook can all work nicely here.

It should be noted that size and aspect ratio are extremely important and arguably the biggest miss by most. Twitter has an aspect ratio of 2:1 while Instagram is 1:1. Small images don't do as well. on any of the platforms. Pinterest is the only platform that does vertical images well. Appearance on mobile is more important than appearance on desktop. These and other technical aspects of image marketing will be covered in a future post. For now, let's just look at the content...

These ones are bad. Don't do these. I blocked out the business that posted one but I kept the one posted by Ram only because as a manufacturer, they should know better by now...

The image quality is poor. The car is cut off. There's no visible branding for the dealership in the image. Overall, it's extremely boring. This is not going to get anyone's attention and nobody who sees it in their feed will care.

It's a nice image of a mountain. Wait. Is that a truck at the bottom peeking up over the edge? It's good that they are getting their fans involved, but the picture should have been edited to appear properly on Twitter before posting it. This is the lazy way out and accomplishes none of the goals.

These aren't bad. They aren't good, either. They're good enough to get listed here just to show the differences between them and the ones further below so you'll know what mistakes to avoid.

The attempt by Nissan is pretty strong. They're trying to do well on Twitter and they're doing an above-average job at it. This particular piece is missing something: impact. The message in the image means nothing other than stating a minor incentive. It gives no reason for people to actually click through to the landing page other than the boring message itself. With image marketing, you need to make a statement in order to get clicks. They should have put more creativity into the messaging rather than state the offer plainly.

More importantly, the offer itself is designed specifically for those who already plan on buying a Rogue, so the incentive is in the reservation itself. At first (and second, and third) glance, this appears to be another rebate offer because it looks like another rebate offer. There are brighter minds than mine that could have fashioned a better message, but it should have been less statement of the facts and a bit more mystery and uniqueness to draw people to click.

This isn't bad because it does accomplish one goal - making a statement. The only thing keeping this at decent rather than good is that the message is a personal one and should have been delivered in a personal manner. While the picture is cool and the message in the text is strong, it would have been better to have a member or former member of the military (there's probably some working at the dealership right now) by a car or the dealership's sign with an American flag in hand. This is a bit generic but a good attempt - still better than 9 out of 10.

Here are some good ones. These are nearly great but are missing a couple of minor components. If you did your marketing like this, you'd be ahead of 99/100 others.

Great aspect ratio. Hot car. Good message and most importantly there's a link to the inventory search for the vehicle itself!

This one is much like the previous except a different variation for two reasons. First, it uses a stock image, which is only good if the image is as good as this one. The thing that brings it up from "decent" is that the link takes you to a vehicle specific landing page which is more appropriate on Twitter than a straight vehicle search. Remember, if they want to search, they will. Putting them on a page with information about the vehicle is better for higher-funnel customers that you'll get through social media.

These are the best that I've seen so far... after searching four hours back in my Twitter feed. There are better ones. There are plenty of worse ones. They aren't perfect but they're pretty darn close.

This one hits goals 1, 5, and 6 nicely but it really nails home #3: Demonstrate a lifestyle advantage associated with your product. It doesn't need to show the whole car. It doesn't need a beautiful background. It has a simple, elegant four word message that can reach the target audience where it hurts.

Remember, it doesn't have to nail several goals to be effective. This time, it does a wonderful job of branding but keeps it touching the community with the localized weather factor. This is exceptional and if the following is engaged, it'll resonate.

Simple and powerful. This is what Nissan missed when they promoted their message. Well done, Mr Potratz and Mr Ziegler.

You don't have to be a professional photographer or a creative genius to get it right with social media image marketing. You just need to have a good strategy, solid execution, and a willingness to know the "rules" well enough to break them ever so slightly.

Thanks Tom! It bugs me when I see annoying things in my feed that don't bring value to anyone.

GREAT PIECE - I honestly didn't realize how twitter was chopping pix. And your 'reasons' to engage with social media are spot on. If a company (or WORSE - a FRIEND) just tries to sell me through social media without giving me ANY value, I unlike or just hide them.