A friend of mine lives in Arizona and was recently telling me about the state’s Stupid Motorist Law. I thought it was pretty amusing and it made me wonder what other funny driving laws are on the books. These are just a few that I found and thought they would make for good comic relief:

Arizona: Every year during monsoon season dozens of drivers decide to drive their vehicle across a flooded roadway or wash. Of course, many don’t make it as cars can get washed away in as little as 6 inches of water. The Stupid Motorist Law holds drivers liable for their own stupid decisions; fining them up to $2,000 per incident to cover costs associated with emergency rescues. This law was enacted in 1995 and inevitably somebody gets cited every year.

Colorado: It is illegal to ride a horse under the influence (I assume they mean the rider and not the horse). This law is rarely enforced but apparently in 2009 a man in a cowboy hat was cited under the law. The biggest dilemma for the police was what to do with the horse; you can’t impound it like you can a car. Finally a local stable owner volunteered to haul the horse back home.

California: No vehicle without a driver may exceed 60 miles per hour (now that would be something to see!)

Montana: It is illegal to leave a sheep unattended in the cab of your truck or car (I guess this means that if you really want your sheep to ride along in your passenger seat, you’ll have to move him to the bed of the truck or take him with you if you plan to leave the vehicle for any length of time.)

Glendale, California: It is illegal to jump in or out of a moving vehicle.

Long Beach, California: Cars are the only item allowed in the garage (This law must have been enacted before Hoarders came along).

San Francisco, California: It is illegal to wipe one’s car with used underwear (but new is OK?)

West Virginia: It is legal to take road-kill home for supper as long as the fatality is reported within 12 hours. This law was passed in 1998 as a cost savings measure, but sparked controversy when animal lovers suggested that some West Virginians would try to run down animals on purpose. Other West Virginians embraced the law and hold road-kill cook-offs that attract thousands of attendees every year.

What are some other funny driving laws that you’ve heard of in your state? What are new laws that you would suggest? 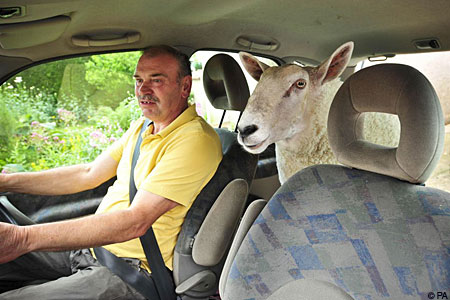 New Law - when there are flying cars, anyone that has owned a mini van or a "roller skate on wheels" type vehicle should never be allowed a flying car license. I personally would also like to see these types of vehicles have their own right lane to drive in and allow the rest of us to be on our way in a timely manner.