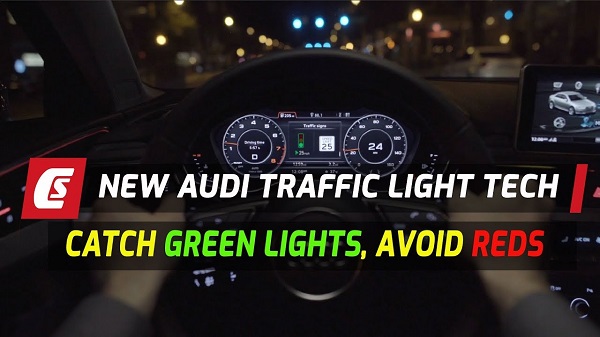 Ever get a string of green lights and think it was your lucky day? Now, thanks to Audi, this is about to become an everyday experience. With its Green Light Optimised Speed Advisory (GLOSA) tech, drivers of select Audi cars are given optimum speed recommendations to ‘surf the green wave’ through the city.

According to surveys by the AAA Foundation of Traffic Safety in the US, on average, an American driver spends nearly 300 hours per year in the car. That is seven 40-hour work weeks sitting behind a steering wheel. Audi of America aims to cut down those hours (and reduce the accompanying stress) with this Green Light Optimised Speed Advisory (GLOSA) tech. Audi is the first manufacturer in the industry to use this technology and hopes to reduce the number of stops needed during a commute, save on fuel and even improve safety.

In 2016, Audi collaborated with Traffic Technology Services (TTS) to launch Traffic Light Information (TLI). This was a PRIME connect feature that allowed some Audi models to communicate with traffic infrastructure in certain cities and metros in the US. Traffic Light Information system was one of this industry’s first steps in vehicle-to-infrastructure (V2I) technology.

Essentially, when the car approaches a traffic light that is red, it receives real time information on how long it will take for the light to turn green. This time-to-green countdown is displayed on the car’s information cluster that is placed just in front of the driver. Or, if the car is equipped with it, the information is shown on the head-up display.

The time-to-green countdown stops at three seconds and then leaves the screen blank to discourage drivers from accelerating at the exact millisecond that the light turns green. This avoids the tragic possibility of their car colliding with another vehicle that could still be clearing the intersection a second or two after the light changes.

The communication between the vehicle and the traffic signals happens via an on-board 4G LTE data connection. The entire system is possible only in cities that have smart infrastructure. Today, there are 4700 intersections and 13 metro regions that are equipped with both GLOSA and time-to-green technology.

GLOSA is an extension of the Audi Traffic Light Information (TLI) technology. It gives the driver a speed recommendation that helps them make it through the intersection during the green signal. For example, if you are driving at 20 kmph between intersections, you may have to stop and wait for a few seconds for the next light to turn green. But with this GLOSA tech, the car will recommend that you drive at 25 kmph so you can make the green light and cruise through the intersection without having to stop.

The speed recommendation is based on the car’s current position and vehicle-to-infrastructure technology (V2I). The speed limit in the area, the signal timing plans and the ‘distance to stop’ are also taken into account while calculating the recommended speed. By minimising the number of stops made by the driver, they hope to make the driver’s time on the road more pleasant and reduce anxiety. The program, of course, won’t recommend reckless behaviours that could endanger lives. Instead, with this information, it helps them hit a string of green lights without having to speed up to make the light or slam the breaks if they can’t speed through the intersection in time.

According to Mark Del Rosso (President at Audi of America) technology like GLOSA plays an important role today and is also a key step in their journey to achieve a future with automated vehicles .

When will this technology be available?

The Traffic Light Information system was debuted in Las Vegas as it has the USA’s highest number of centrally controlled traffic signals. The program expanded in 2018 to include Washington D.C. Today, metro areas that have Green Light Optimised Speed Advisory also include 13 other US cities.

In the future, it is possible that this technology could be integrated with the car’s start and stop functions in order to save fuel. Optimised navigation to avoid intersections with a red light altogether is another possibility. A key aim to developing these technologies and applying them to metro areas is to reduce congestion within the cities and improve mobility.

Vehicle-to-everything (V2X) technology can potentially reduce the number of crashes that take place. Utilising this technology may mean reduced insurance premiums, with warnings to drivers of imminent hazards like getting too close to the edge of a road, collison paths and vehicles stopped ahead. The possibilities are endless, and the technology is available now. Next stop, flying cars and the Jetsons.