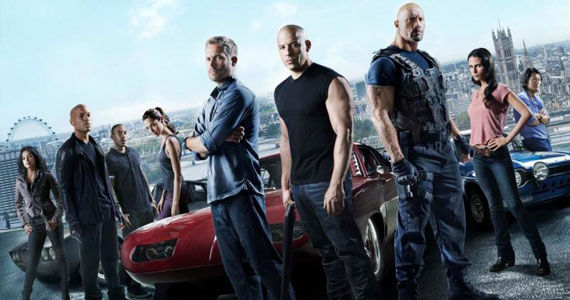 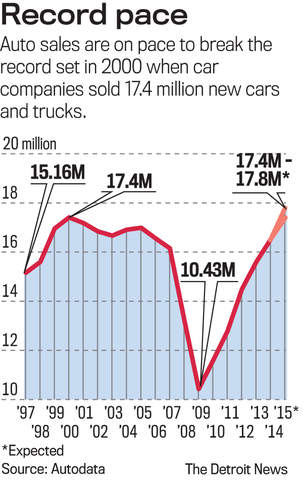 Sales gains at Hyundai-Kia, General Motors, FCA US, Ford, Toyota, Nissan and Subaru, drove a 14 percent increase in October to 1.455 million... This puts the American auto industry on track to set a new all time annual record for sales volume in 2015.

The annualized sales rate came in at 18.23 million and was above September's 18.17 million pace, the highest since July 2005. It's the first time the annualized pace of sales exceeded 18 million in back-to-back months since February 2000.

Source: Adapted from article Written by David Phillips and John Irwin of Automotive News with help from Gabe Nelson 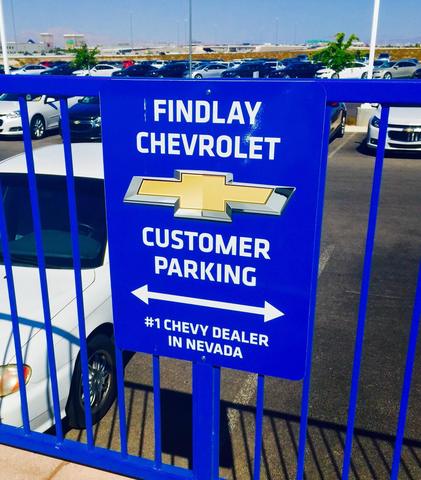 GM estimates the six-month moving average for the SAAR now stands at 17.8 million, putting the industry on pace to set a record for light-vehicle deliveries in 2015, easily topping the 17.4 million units recorded in 2000.

“The consumer is driving this,” Jeff Schuster, an analyst for LMC Automotive, told Bloomberg in an interview. “You have a consumer who feels good about the economy, who wants a new vehicle and who has the means to get it with relatively cheap credit. Everything is aligning.”

The SAAR was forecast to reach 17.7 million last month, up sharply from 16.59 million in October 2014, based on the average of 13 estimates in a Bloomberg survey of analysts. The SAAR has now topped 17 million units seven out of ten months this year. 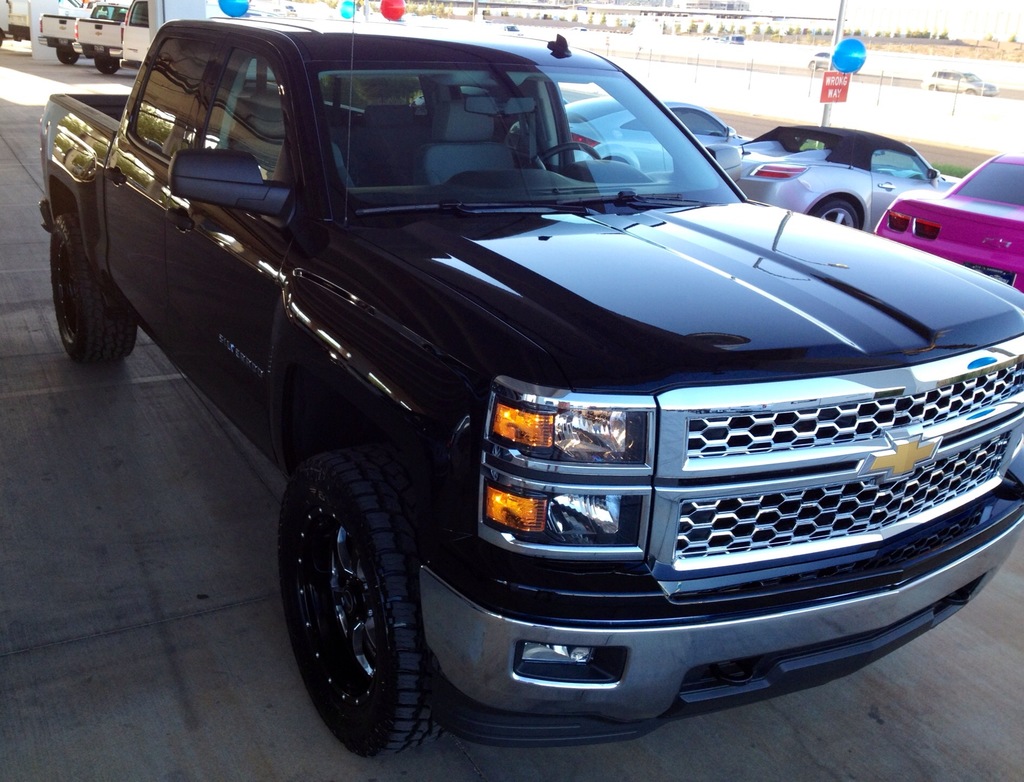 It Was About Trucks, Trucks and More Trucks

Total October sales of trucks, crossovers, SUVs, minivans and other light trucks increased 22 percent, aided by low fuel prices, while car demand rose 4 percent. While truck demand has been strong all year, rising 12 percent through October, car sales rose in October year over year for only the third month this year.

“Manufacturers with a strong light-truck portfolio -- FCA, Ford, GM, and Toyota -- are maximizing production and availability of these products to take advantage of the appealing environment of low interest rates and gas prices," said Tom Libby, manager of industry analysis at IHS Automotive. "They know this situation won’t last forever.”

GM took advantage of gains in light-truck demand at Chevrolet, GMC and Cadillac, delivering a retail and fleet volume increase of 16 percent in October.  Sales rose 18 percent at Chevrolet and GMC, and 13 percent at Cadillac. Deliveries slipped 0.2 percent at Buick. October was also the first month this year that GM's car sales increased year-over-year.

“The redesign of our full-size trucks and SUVs, and our move into the small crossover and midsize pickup segments were smart bets and our timing couldn’t be better with industry sales at record levels,” said Kurt McNeil, vice president of U.S. sales operations for GM.

Ford Motor was boosted by a 14 percent increase at the Ford division and 13 percent increase in overall retail shipments. Deliveries slipped 4.5 percent at Lincoln, ending six consecutive months of gains.

Toyota Motor Corp. said sales surged 13 percent to 204,045 vehicles, including a record October for the Toyota Division that was driven by the Highlander and RAV4 crossovers. For the second straight month, Scion tallied a gain with volume rising 50 percent.

Honda Motor Co. posted a 9 percent gain with sales of 131,651 vehicles, underscored by an October record for the Honda brand. The redesigned Honda Pilot crossover stood out with a 63 percent gain with 12,913 vehicles sold.

"Big Month" Is An Understatement

“October was a huge month for the industry, smashing expectations and continuing its hot streak,” said Bill Fay, group vice president and general manager for the Toyota division.

Industry volume was projected to rise 10 percent to 1.41 million cars and light trucks in October, based on the average of four analysts’ estimates compiled by Bloomberg.  In September, each of the Detroit 3 as well as Japan’s big three automakers advanced at least 12 percent.

At the Volkswagen Group, where volume was forecast to drop 6.4 percent, sales defied gravity and rose 5.8 percent. Deliveries edged up 0.2 percent at the VW brand, despite a sales ban on some diesel models after the company admitted to violating U.S. emissions tests, and 17 percent at Audi.

Among other automakers, volume rose 87 percent at Volvo, 35 percent at Mazda, and 20 percent at Subaru and Mitsubishi. Deliveries slipped 3.8 percent at the BMW brand and 23 percent at Mini.

"We are finally getting to a place where the inventory, and the right inventory, is available for customers when they want it,” a Mazda spokesman said.

"We expect to surpass our 2014 annual sales record of 513,693 vehicles before the end of November,” said Thomas J. Doll, president and COO of Subaru of America.

At Jaguar Land Rover, volume surged 76 percent on a 98 percent gain at Land Rover. Jaguar deliveries slipped 1.9 percent and are now off 4.9 percent for the year.

Car and Truck sales volume continues to be fueled by favorable credit, pent-up-demand, notably for light trucks, and lower gasoline prices. American Car Dealer sales of light vehicles, driven by robust demand for pickups, crossovers and SUVs, have advanced 5.8 percent this year through October and remain on track to top 17 million units for just the third time.

There Were Plenty Of Deals To Be Found

The last quarter of 2015 will see widespread incentives and promotions, especially among luxury brands, and on cars, where consumer demand has been weakest. Buick, for example, is offering $6,000 off select 2015 Regal models that have been on dealer lots the longest.

Other deals available on manufacturer websites for October:

The Volkswagen Group, moving to avoid defections after it admitted to cheating on diesel emissions tests, boosted incentives 29 percent in October with $2,000 in “loyalty cash” to retain owners.

“It’s a strategic move since Volkswagen brand owners tend to be passionate about their vehicles,” said Larry Dominique, president of ALG and head of industry insights for TrueCar. “If Volkswagen can rebuild trust with current owners, it has a better chance of brand success down the road.”

Incentive Spending Per Vehicle For October 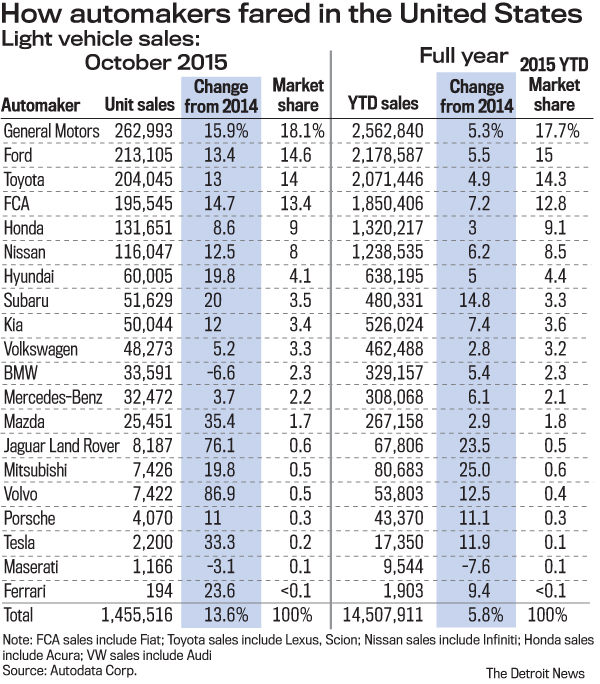