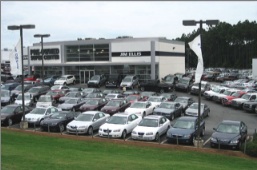 Banks are unable to differentiate between successful car dealers and the automobile industry. treating all dealers the same, assigning high risk labels to everyone, and looking for reasons not extend floor plans and thereby penalizing the successful car dealers in order to balance out their concern about exposure. Successful dealers that depend on borrowed money to grow their inventories, their companies, and ultimately the economy, are unable access credit because banks are unable to see the difference between profitable companies and damaged industries. Banks are not assigning any positive value for profitable dealers and treating all dealers the same. This is insane and a non judicial way to lend money.

I know auto dealers that have been in business for 50 years that are still profitable in the current economy and are being treated like they have the plague. This is yet another example of the lender being unable to differentiate between a business and an industry. And this inability to differentiate between successful businesses and damaged industries extends to real estate and other small businesses dependent upon retail sales.

The Small Business Administration doesn't even cover floor plan loans for car dealers but recognizing that dealers need help, the SBA began rolling out new programs tailored to them. So far they have approved just one loan.
Mr. Banker just because a carton of milk spoils in the refrigerator you would not trash all of the contents in the refrigerator. Just because one of your kids is late coming home you wouldn't punish all your children. Banks should be assigning an added value to the small business entrepreneur that proves profitable while the industry and the economy shrink. Maintaining a profit today requires much more skill as a business person than it did a year ago yet no bank places any measurable value on it.

For banks to lend money again they must sanely distinguish differences between the borrower and the industries they are in and assign a positive value for those of us who can stay profitable despite a contracting economy. We aren't talking about credit card consumption here we are talking about proven small business entrepreneurs that already made it through the worst of the economy's contraction and will be the one's to grow the economy going forward.

I couldn't agree more. Kudos to you for writing an very relevant article.