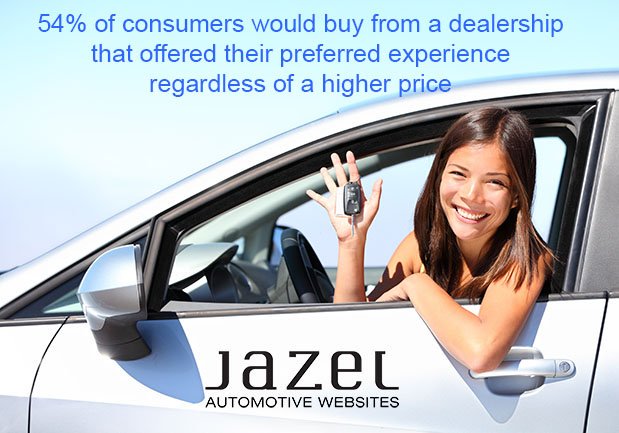 The team at Jazel had a blast showcasing some dealership marketing genius in 7 of the Most Brilliant Car Dealership Marketing Ideas We’ve Ever Seen, a post they wrote a while back. Thankfully, with all the marketing creativity in the auto industry today, they’re never short of new examples to share. Without further delay, here are some creative car dealership marketing ideas from Jazel to get you inspired.

Dealers occupy a unique business position in their communities. As such large and visible businesses, dealers have the rare opportunity (among local businesses) to use their space to put on large-scale events and capitalize on massive community engagement and reputation-building. One of the businesses that nails this in their car dealership marketing is Franklin Sussex Auto Mall. Every weekend during the month of July, Franklin Sussex Auto Mall brings the beach to the dealership.

No, it doesn’t involve seawater, but yes, it does involve sand. The whole front of the dealership is filled with sand, in which they place beach chairs and palm trees. The dealership staff dresses in Hawaiian shirts and shorts, and have a barbecue every weekend with activities like treasure hunts, a sandcastle-building contest, and dunk tank. The event, unsurprisingly, is incredibly popular with local residents, who reportedly come by just to hang out (just like at the beach). While these extravagant displays of generosity are baffling to some, General Manager Bill Snouffer says that the returning customer base and consideration they receive for putting on such nice events is one of the reasons Franklin Sussex Auto Mall continued to be successful during the Recession.

Is a beach party at your dealership expensive? Yes. Is it difficult to organize, construct, and clean up? Yes. Is it a ton of fun and an awesome car dealership marketing idea? Absolutely.

There are probably many dog-friendly dealerships out there, but we doubt they’re AS dog-friendly as Rochester Toyota. This car dealership’s marketing features the owner’s adorable Golden Retrievers and the pun-tastic tagline “No Bones About It!” Rochester Toyota’s website is peppered with images of their dogs that make you smile as you browse. We have to say, this is an exceptional way to tie other forms of marketing to the dealership’s website, showcase this dealership’s unique culture and personality, and engage shoppers emotionally.

A section from Rochester Toyota’s homepage with a particularly cute pup.

Even if you aren’t a huge fan of dogs, this is a creative dealership marketing idea you can respect. Many dealerships have slogans or marketing that they incorporate very well into their websites, but Rochester Toyota is particularly memorable. Reviewers will even occasionally end their testimonial with a cheerful “No Bones About It!”

It might be because Rochester Toyota’s dogs are absolutely adorable, but they’re also the perfect mascot for Rochester’s dedication to the customer. The “No Bones About It” slogan is about Rochester’s commitment to customer centricity — a commitment that Rochester follows through on daily.

The best car dealership marketing ideas are those that have a broad scope of benefits for the dealer. Not all marketing campaigns, for example, can boost your reputation, introduce you to potential customers, and generate leads. This one did.

Looking for a creative way to bring in qualified leads, Fairway Ford and a local newspaper teamed up to launch an “ugly truck” photo contest. Local contestants could submit pictures of their discarded, dilapidated, beaten up, broken down, or otherwise just plain ugly trucks, and be entered to win a cash prize. The submission involved a quick survey which contestants were required to fill out, and which created a lead for Fairway Ford. In the end, a winner was chosen, and the owners of a particularly spectacular rust bucket were awarded with $1,000.  In all, the contest generated over 70 entries and 800 votes. We would probably argue that the real winners here were Fairway Ford.

Fun and creative dealership marketing ideas like this are great for dealers who don’t have the budget to say, put on a month-long beach party. Good ideas don’t need to be expensive to be inspiring.

Sports Speculation to Sweeten the Deal

It seems like we’ve seen hundreds of car dealers marketing ideas that involve sports. As often as dealerships and sports are paired in dealer advertisements, really creative uses of athletics in dealership marketing aren’t that common.Thankfully, there are dealers like Mastria Auto Group. This dealership decided to capitalize on excitement for a game by offering an incredibly attractive wager.

Mastria Auto Group put on a promotion that promised anyone who purchased (and took delivery of) a car during the Labor Day weekend a $5,000 rebate in the off-chance that the Patriots scored a touchdown on a kickoff return in the opening game of that season. Against the odds, it happened, and 33 happy customers got to take home their new vehicle with a hefty rebate. Thankfully, Mastria Auto Group insured the promotion, and were covered for the $165,000 payout. In the end, they found that their unique car dealership marketing idea paid off — the sports speculation promotion had been a great tool for closing deals. Customers teetering on the edge of a sale were swayed by the potential for a large rebate, particularly since the wager involved their regional football team, and this resulted in a nice uptick in sales for the Labor Day weekend.

Integrating fan-specific activities (like a friendly wager on the outcome of a game), is a particularly creative way to bring in customers, close deals, generate goodwill and positive word of mouth, and generally showcase a dealership’s connection to the community.

Customer data is enormously useful. The more dealers know about their shoppers, the more they can tailor their dealership to provide the best possible shopping experience, which naturally means more sales. Unfortunately, it isn’t easy to collect personal information from people unless they want to give it.

Enter Greeley Subaru, a dealer in Colorado with a creative new marketing idea. Partnering with the Greeley Tribune, the dealership added a “What Kind of Driver Are You?” quiz to one of the newspaper’s sponsored events. By the end, the quiz brought in over 300 emails for the dealership (to be nurtured), a tremendous amount of customer behavior and attitude data to help Greeley tailor their future dealership marketing campaigns, and even resulted in a car sale the very next week.

This might not have been as giant an event as the beach party, but simple, creative tactics for learning about your audience can be winning car dealership marketing ideas of their own.