According to the report:

The wealthy average membership in 2.8 social networks, with an average of 110 connections.
They are intolerant of opt-out techniques, with 65% saying that having their personal data given out without permission would cause them to disconnect; 63% have an interest in "do not track" lists.


Milton Pedraza, CEO of the Luxury Institute, said "The wealthy... will not tolerate behaviors exhibited recently by social networks that force opt-out techniques on member's private purchase information, and make it difficult to exit... (in addition)... we are pleasantly surprised at the rapid acceleration in the over 55-yearold wealthy consumers, whose participation increased fivefold, to 49%." 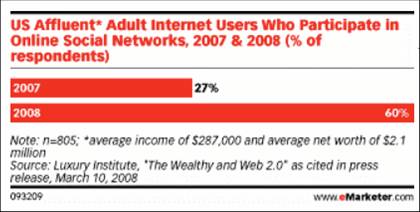 And eMarketer, expanding on the release, notes that Online communities are likely to continue fragmenting into selective and specialized entities of like-minded members. This should make it easier to reach target markets, although luxury firms must jump some critical hurdles to get it right.

Paul Verna, senior analyst at eMarketer, said "The Luxury Institute's findings suggest that membership in social networks is one of the factors driving the growth in Internet usage among the affluent."

This demographic segment - defined as people with annual household income of $100,000 or above -- represents a large and growing percentage of the US Internet population. In 2007, an estimated 25% of US Internet users were affluent, up significantly from 16% in 2001. eMarketer projected that this percentage will increase to 27% in 2011.

Nielsen Online, according to eMarketer, said last year that nearly 30% of Facebook's users came from households with at least $100,000 in annual income. Comparatively, 22% of MySpace users were from similarly-affluent households.

While Nielsen's numbers appear to contradict the Luxury Institute's finding that MySpace commands a higher percentage of affluent Internet users than Facebook, says eMarketer, there is no actual discrepancy when one considers that MySpace's user base is considerably larger than Facebook's. Hence, 30% of Facebook's user base is actually a much smaller number than 22% of MySpace's users.

For more about the study, please visit Luxury Institute here.