You had every intention of making changes and doing something different. You had all of the information gathered and catalogued. You even made a list of all of the Managers and their responsibilities and revised their Goals based on the information and training you were about to provide them.

You were ready to reap the benefits of attending the NADA…

Are you a dog in a cat world?

A dog and a cat were recently having a conversation about how each other looks at the world.

They had been friends a long time and the dog had recently been promoted to the title of Service Manager of his Dealership. The cat had stopped by for a visit and to congratulate her friend on his recent promotion. And, as Managers are prone to do, they began to discuss how each run…

R this and R that

R this and R that.  Which one is the right R for our Dealership?  If we concentrate on ROI, what do we lose in ROR? Is it possible to have too much focus on ROR?

Wait. I didn’t explain what I am talking about very well.  Ok.  ROI is referring to Return On Investment.  This “Investment” can be anything. Time, Money, Parts, Labor…anything.  And when we…

Knowing Your Phone Process and Your Customer's Experience

The Dealer Principle, Executive Staff and Department Managers are mired in daily tasks more than ever as our industry recovers---most have downsized dramatically in reaction to the recent struggles and find the leadership team is now required to do 150% or more of the duties they once did.

Concurrently, automotive Sales and Service customers have continued down the path of "Choosing" their providers from a safe distance. The internet remains the…

"Are you calling from home or work....?" 2nd Biggest Profit Leak on the Phone !! 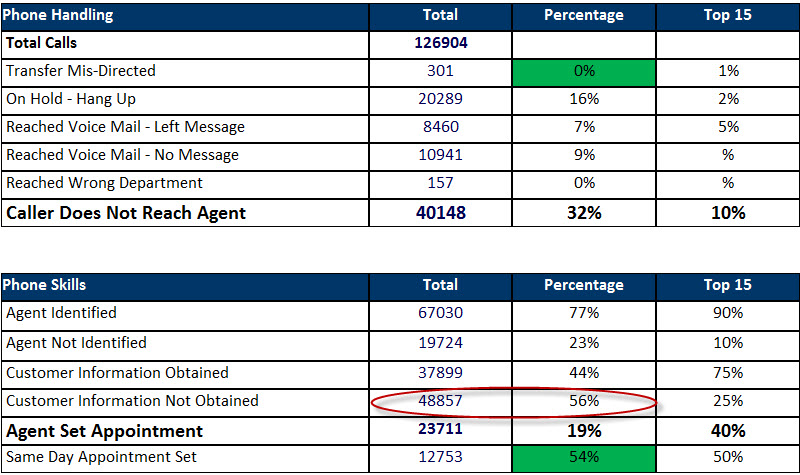 So looking at a recent…

Overland Park, Kan., May 2, 2011 ― NCM Associates, a leading provider of retail automotive 20 Group services, Education, Retail Operations Consulting and the originator of the NCM Benchmark® for Success program for automobile dealers, today announced that Helms Brothers Mercedes-Benz has tripled its gross profits through the implementation of the…

Influencer Converting a Lead – The Need for Speed by Jeff Ward

Everything else being equal – Speed is the game-changer. Speed is your “not-so-secret” weapon.
Speed is a key element in lead conversion maximization.

In the world of sports we hear about the importance of speed from the broadcast announcers as they
call a game and we read about its importance in articles written by sports writers in their analysis post-game. You hear phrases like “with his speed they will never catch him” and “their speed on the base paths makes them a… Continue

Cutting To Save Costs Can Cost You Greatly, So What's Next?

It's so much a part of business today: cost cutting, staff reductions, marketing cancellations, disappearing perks. Even companies that are profitable and efficient are not exempt from the slashing and hacking (that makes sense, right? right?). Needed? Absolutely! Done right? No way! What can you honestly expect when you're name (and more) is not out there?

There's no point in kicking a dead horse: it's bad out there and those that watch conventional media just make it worse by… Continue

A RECESSION IS A TERRIBLE THING TO WASTE by Grant Cardone

"A recession is a terrible thing to waste so make the most of it", is what I say. No one in their right mind would ask for this severe of an economic contraction as they prove so painful and inflict so much financial damage (as already has been proven). While no one would ever wish this, even on his best competitor, the reality is there are many benefits and opportunities created by them:
1) Competitors so involved in the problems they can't see a solution if it walked in and laid… Continue

Hello and good morning everyone. I am trying to find some templates that I can use to track my Internet customers sales, profit, apts,lead sources ect. I know someone has to have something that is really good that I can possibly use please noo pretty please.....Thanks Kim

Stay In The Driver's Seat and You'll Put More In Theirs

When it comes to the selling of cars today, it's not any easy task. Compared to the past twenty plus years, the cake walk has slowed to a drunk crawl. So what allows some folks in the 'Internet' sales world to deliver 15, 20 or even 25 and more per month? Control.

Staying in the driver's seat is not about dominating a conversation (or having a monologue with a prospect in front of you) or barely raising above a whisper for the fear of the person leaving the lot. Control is first… Continue