Where does Profit Improvement start? At the Service Managers Desk, of course!

In every Dealership there is a desk. And behind that desk sits someone who has the responsibility to increase Profits.

In Fixed Ops, this person is called the Service Manager.

Where does RO Count attrition start? On the Telephone, of course!

With the emphasis on increasing RO count through the manufacturer’s initiatives in regards to Quick Lube, Express Service, Fast Oil Change or whatever you call the 30 minute oil change in your Dealership, you would think that RO counts would be going up.

In some instances, yes they are. There is no doubt that these programs have resulted in more traffic into some stores in some cases.

But, in many stores, even with the advent of the “30 Minute Oil Change” marketing push and…

Where does Service Sales failure start? In the Service Drive of course!

In every dealership that I visit that is struggling with increasing Sales per Repair Order, performing a walkaround  is the area that the Advisors do not do well, if at all.

Recently, I was observing a service drive when a customer pulled up in a car and the advisor looked up from the desk and and said "Oh, look...she is just sitting there." And for the next 3-5 minutes, the advisor sat at her…

Here is a simple way to make more every month.
It's called the "6 Steps to Happy Bank Deposits" and it goes like this.

1st, write down what you make per month…

The Right Way and The Wrong Way

During the analysis and evaluation we conduct prior to starting a training program the question of ethics and standard business practices we train on usually requires some explanation. In other words, Dealer Principals and General Managers want to hear from us that we conduct our training programs ethically and professionally.

Are your Advisors "Helpful" or "Professional"?

If you are like a lot of Dealers and General Managers hiring “helpful” people always seems to be the right call. The belief is that you can develop someone into becoming a Professional. While I don’t disagree with this practice, what I find all across the country is the opposite of helpful or Professional.

Because we train all across the country, we have exposure to every make and model of vehicle in every kind of Dealership,…

Chances are you have been living those four financial principles since you became the owner or GM. And if you are a service manager reading this, you have been the willing champion of the preceding 4 financial cornerstones to dealership success.

Can I ask you a question?

How does it make you…

It has come to my attention that Fixed Ops Gross Profit has resigned effective immediately. Without the continued support of Gross Profit I cannot continue to be effective in the performance of my duties while adding funds to your Profitability. (not to mention your bank…

It is with great regret that I must submit this letter of resignation effective immediately.

Although we have worked together over the past few years I don’t feel I can contribute to your bottom line anymore. It has been a great experience and I wish you and all of your dealership team the best. Google is testing out its advisor product with car dealers/buyers in the San Francisco Bay area.  After having a mild heart attack and visions of "Tru Car" on steroids, I quickly realized that it will simply force marketing companies to re-structure their dealership offerings.

Although I am not aware of the ins and outs of its paid search as it pertains to car dealers, what I first noticed is that new car pictures are found on the front page of a search.  As a car shopper, I would…

We hear many things in Service. 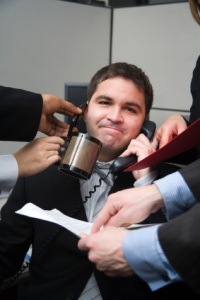 Stand on any Service Drive on any given day and you will hear Customers describe all kinds of noises related their vehicles. The variety of sounds people make describing their …

What's that noise on your service drive?

Have you ever blown up a balloon and then just let it go and listen to the sound it makes? If you have children or a crazy Uncle Lenny, chances are you've heard this noise before. It is so distinctive that once you've heard it, you are not likely to forget it the rest of your life.

I've heard this same noise in my head many times in the service drive right after an Advisor says something he or she shouldn't have. In our…