Friday, February 29, 2008
Fear is Your Great Indicator to Take Action

Fear is the great indicator that wealthy and successful people use as an sign that it is time to push through and get to the other side where their expansion lies. Unsuccessful people, who are assured to never have wealth or happiness stop every time they get afraid. All people experience fear, it is how you respond to it that ultimately makes the difference in your life.

April 12th-13th, 2008 in Atlanta, GA would certainly be a good investment in growing your professional capabilities and career potential. You can get more details on this dynamic, fun and productive seminar event at http://www.ItsMyGoal.com…
Continue

Music - What a Great Addition!

I don't know how the idea of adding music to each page came into reality, but I love it. If it is you Ralph, thank you very much! That little feature on this site gives me a chance to share songs and artists that you are unlikely to find on mainstream radio.

- Tecumseh Valley - Written by Towns Van sant a singer and songwriter who may not be well-known outside Texas. Artists however have discovered his sad songs and many have been recorded by country and other singers. This… Continue

Here's a great example of using a combination of email, online video and model-specific microsites to pull together an effective and personalized autoresponse targeted to customers who have submitted leads from 3rd party lead providers... Here's the email structure sent out by the dealership as best as I could copy and paste it into this Blog posting format:

Carmakers are finding they have a new rival for online ads: dealers.

Now that auto dealers are finally embracing the Internet, popular third-party sites like Edmunds.com and Cars.com are the subject of bidding wars.

CPMs at such sites have risen to as much as $34 compared to only $4 two years ago, according to Cheril Hendry, president of HLF Brandtailers in Irvine, Calif.

Hendry, who handles marketing for 35 local dealers, said the third-party sites have been… Continue

Dealer Profitability Has Stagnated for 7 Years

American Auto Dealer profits seem to be stuck in neutral since 2001...

For the sixth straight year, U.S. auto dealer profitability failed to improve in 2007. When considering the current and continuing credit crunch, combined with industry projections of slumping sales in 2008, the prospects for dealership profits in 2008 don't look much brighter.

The average franchised new-vehicle dealership made a net pretax profit of 1.5 percent of sales last year, according to National… Continue

Here is the Washington Post's Mensa Invitational which once again asked readers to take any word from the dictionary, alter it by adding, subtracting, or changing one letter, and supply a new definition.
Here are the winners:

1. Cashtration (n.): The act of buying a house, which renders the subject financially impotent for an indefinite period of time.

2. Ignoranus: A person who's both stupid and an asshole.

3. Intaxication: Euphoria at getting a tax… Continue

The future of online vehicle displays

This is what we have all been looking for! Slideshow, 360 spin, voice-over capability, and a clean, very smooth operating appearance! 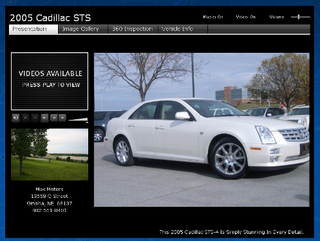 There were more than a billion views on Yahoo! Video in January 2008... That's a lot of people watching a lot of online video. Such is the new state of the online… Continue

Is The Car Business Really That Bad? The author of this article is Jim Edwards. Jim is a friend and someone that I consider one of my mentors in the automotive industry. He wrote the following observation about a recent experience at a car dealership and I wanted to share it with you. I hope you enjoy it.

Two months ago, my car club was holding its annual open car show at a large dealership in my area of the state. This event draws hundreds of owners eager to show off… Continue

In 2008 a new phrase has been coined “Online Dealership Reputation Management”. In other words, good old fashion customer service meets the net. Over four years ago MyDealerReport.com brought a level of accountability to the automotive industry with the introduction of dealer ratings and reviews. It has taken this long for the industry to catch up, but it better late than never. Well, I wouldn’t say… Continue

I have been involved in dealer communications at American Honda for over 12 years and I enjoyed my experience very much. The dealerships are great people to work with. The one area of concern has been the vision and direction of the Acura Division.

As I listened in to the presentation to Acura dealers at NADA (San Francisco) I heard the promise of a "huge shift" in the next year that will move the brand closer to tier 1 luxury brands such as Lexus, BMW and Mercedes-Benz. I truly want… Continue

How to Find and Attract New Customers

Is Your Dealership Attractive?

There’s an old adage that says, “A business must grow to survive.” This is especially true for automotive dealerships. Over time, some of your customers will move away, some will change lifestyles, and others will leave for a myriad of other reasons that are beyond your control. In other words, if your dealership isn’t constantly attracting new customers to replace them, you will eventually find yourself with no customers left.