What Was Your First Car? Tell Me a Story About It.

As you may know, I do my best to keep car sales fun. After drowning myself in the mind-numbing Cash for Clunkers docudramament, I need a break.

I would like to hear about your first car -
What was it?
Would you still like to have it?
What happened to it?
Are you willing to share a (clean) story about your time with your first vehicle?

I will share my story - my first car was a 1969 Chevy Camaro Z28 - silver - 100% original. It was my grandfather's pride and joy. When he passed away, my grandmother gave it to me. I drove it only 3 times before I realized that if I were ever to wreck it (or get a ding on it), I would be forever the black sheep of the family. So she sold it to a collector (for way less than she should have), but gave me $3,000 toward my "first" car.

As you will see from the picture, this WAS a white 1987 Eagle Premier. They said it was the luxury edition because it had the gray plastic cladding along the bottom :). I suped it up with some 15" MTX Blue Thunder woofers in the trunk and an Alpine stereo with a small amp- I was good to go. 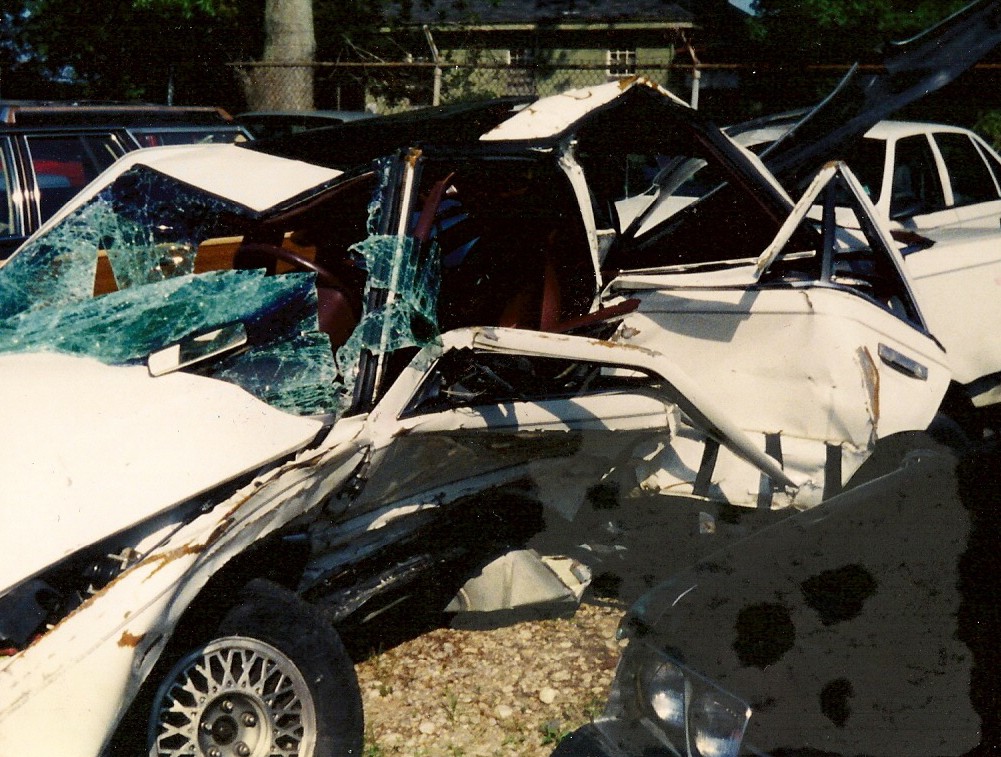 This is what happened to it. This is what the result is from going horizontally across a highway, getting smashed in the driver's side door by a barreling Ford Taurus traveling at 70 mph, and flipping a half dozen times, ending upside down.

I can't remember hanging upside down in my seat, pinned by the door, seatbelt, dashboard, and whatever else, while the crew cut away the door with the jaws of life as I was crushed and unconscious. And I won't put you through the bore of hearing the endless list of injuries I suffered or the organs I had removed because of the accident - but I will tell you I am thankful I was not driving that 69 Camaro. 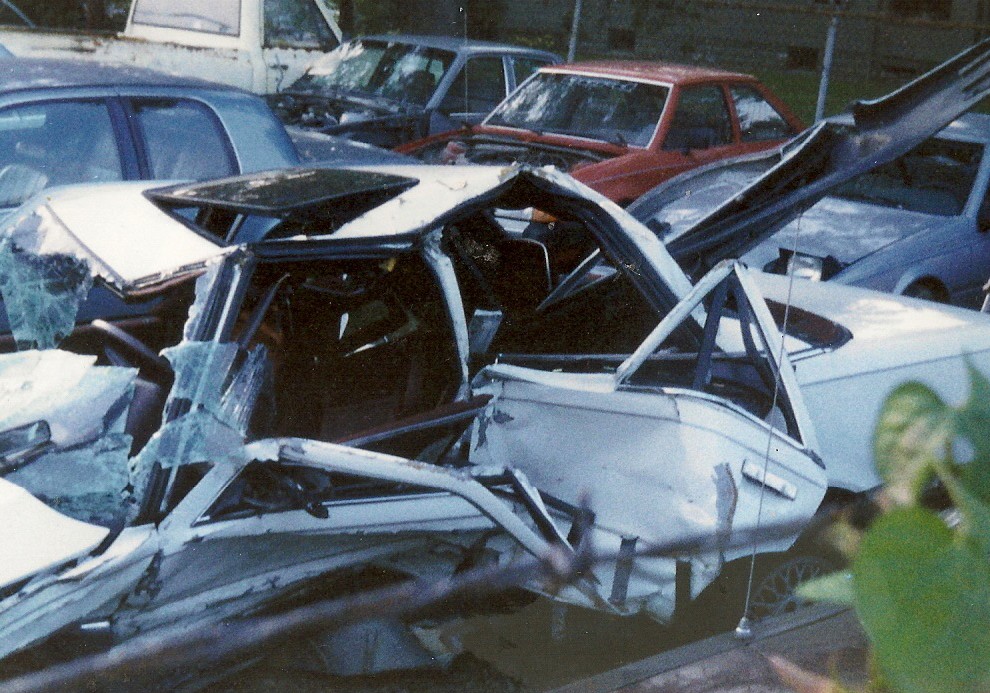 Had I been in the Camaro, I don't think I would have survived. If I wasn't hit by Ford, I'd have likely bowled over a small concrete barrier and plummeted off the ramp and down 6 stories into a ravine - with all of my passengers. (Just so you know, there was no drinking or anything involved. I was an exceptionally good kid - just an early driver who couldn't control a spin-out after hitting a ton of gravel dumped on a ramp to the highway.) It made the front page of both papers so I guess I started getting published early in my life.

So what if I missed half of my senior year in high school - quite possibly having some of the best times of my life? I am here to share these pics and this story with you fine folks. Maybe it is odd that I've dedicated my life to promoting and selling the same device that almost killed me (probably only gun brokers and heroin pushers are willing to do that, but I have been almost killed by vehicles twice in my life - I won't show you the pic of my Ford Bronco in college but it is almost as bad. That's for another blog, another time.

Go ahead, tell me your stories. Share some pics. Have some fun. 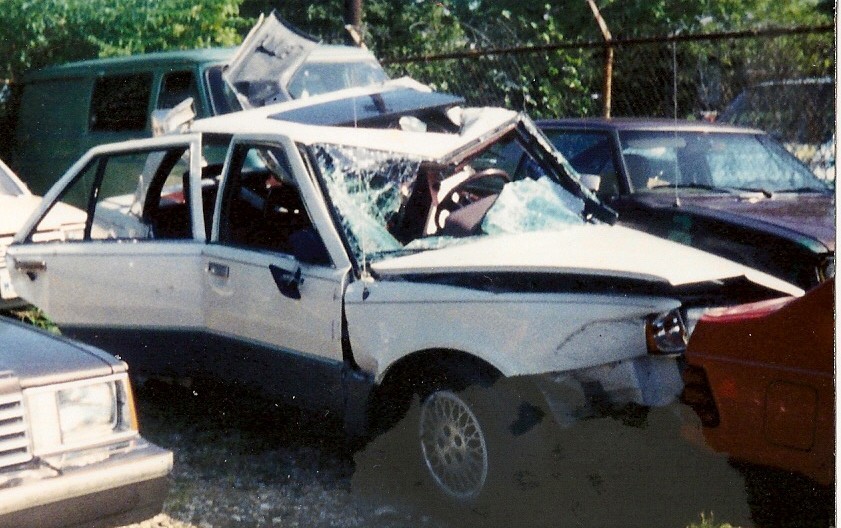 Comment by Gilbert A. Chavez on July 29, 2009 at 12:12am
I inherited my brothers 1966 Ford Mustang. It was great while it lasted. Then I bought a 1979 Ford Pinto with money I earned splitting fire wood. The car was a total chick magnet. It had rainbow stripes with a red interior, and a sunroof! Ironically, I started my career in the car biz selling Ford’s.

Comment by Joe Webb on July 28, 2009 at 5:20pm
Volker, your first car is excellent. It looks like a clown car at a circus. But the fact that you were the cool kid on the block with this bad mamajamma makes it funnier.
Brian, kids don't need fast cars. :) 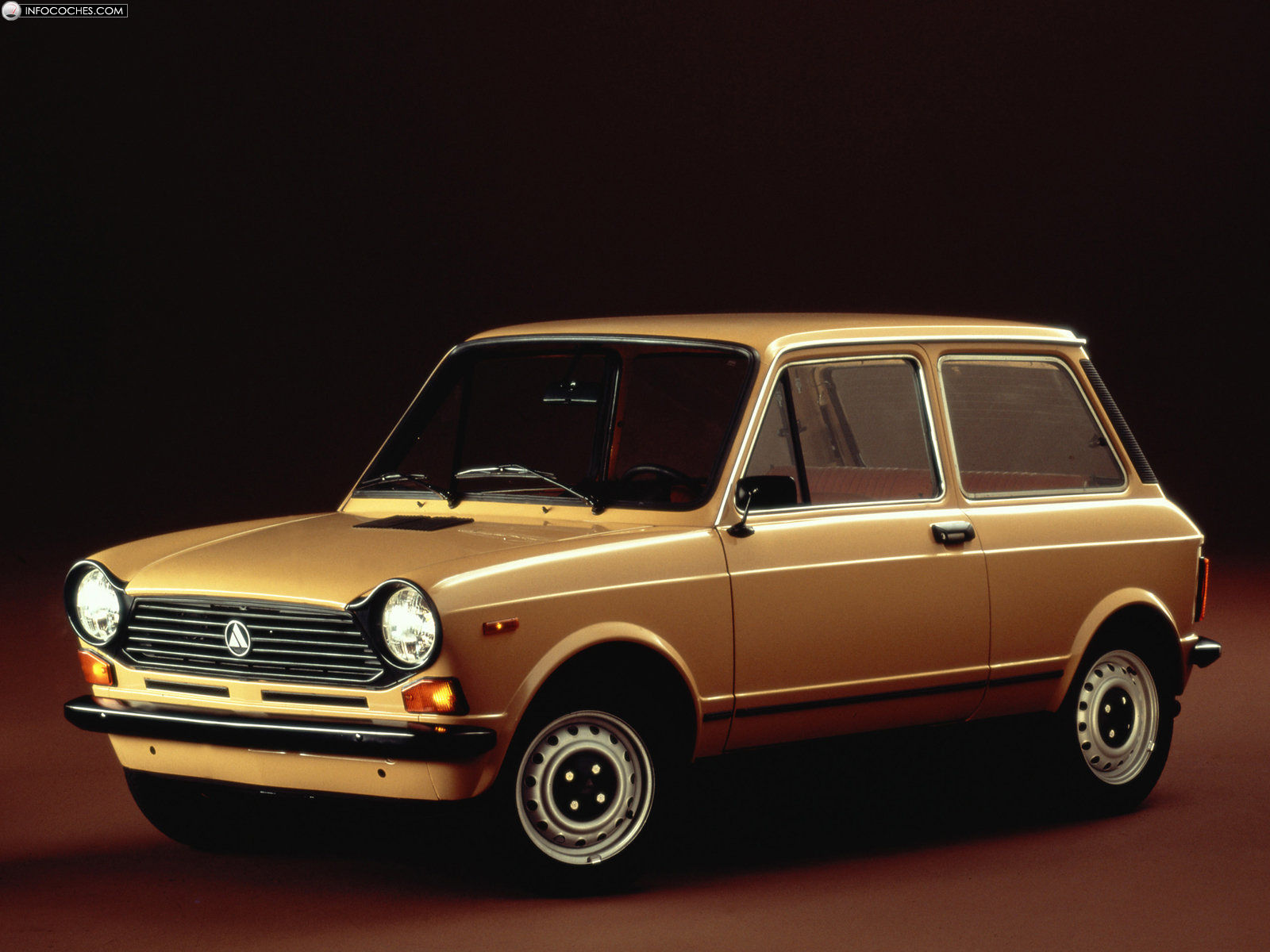 That was a hoot in the early 80's and I was one of the lucky ones in scholl who had a car. As you may can imagine, in Germany being a student and having a car is like today having the newest iPhone, own room, and a monthly allowance of $300 as a teenager. The photo added on is the model, also when mine was orange, and I sprayed the front grille in the Italian tricolore (because it was an Italian car and it was cool, too). The windshield washer spryer was actually a cut in have rubber ball which delivered after pressing 12 times a strol like an 85 year old in the mens room, who has prostate problems. It was the best car (at this time to have) 4-speed manual, and a top-speed of 60mph. the right thing for the German Autobahn. I miss her.

Comment by Bryan Armstrong on July 28, 2009 at 2:56pm
I bought my first car when I was 14. It was a 1968 Chevy Impala with the 327. Dad let me have use of the garage and I took out the engine, bought a book and with wrench in hand proceeded to dismantle the entire vehicle...
Fast forward 8 mos of constant abuse on my body, mind and soul, not to mention my mothers constant chagrin at not having the use of the garage, and I began driving a fully restored and absolutely gorgeous car.
IT WAS FAAAAAAAAAAAAAAAAASSSSSSSSSSST! Had many good memories in that car.
Unfortunately,one night I had parked it behind my Mother's Olds Delta 88 Royale (am I dating myself?) and she asked to take it to the store to pick up a few things...reluctantly,I agreed.
On the way TO the store she hit a horse that had gotten out of someones pasture, spun the car out and put it in the canal. horse and Mom were both fine but by the time we got the tractor and pulled the car out it was a goner.
Now I understand the nature shows and why the Impalas in the wild are so nervous around the watering holes.
But these are the risks you face when you grow up in Idaho!

Influencer Comment by Clarence U Romero on July 28, 2009 at 2:35pm
LOL, Joe, very funny. I actually was assigned to a Colonel in the intelligence dept as an accountant. I worked summers, and one weekend a month. Not a bad gig

Comment by Joe Webb on July 28, 2009 at 1:22pm
Hey Clarence, the Pentagon would have only hired you to a full-time, executive position if you paid $300,000 for your Chevy Celebrity. They'd look at the car, ask you what it does - you reply with "Gets me from A to Z." They'd say "brilliant. He is definitely one of us" and allow you to be the purchase agent for all government equipment.

Influencer Comment by Clarence U Romero on July 28, 2009 at 1:17pm
Wow Joe, two horrible crashes? You’re the lead character in the play of life.

I grew up in a well to do Military Academy Valley Forge. At the high school graduation there were Porsche’s Ferrari's, BMW's and allot of cool vehicles with names on them. Mine was a 1985 dookie brown Chevy Celebrity, with bench seats, no air, or tape, just am/fm.

My father said, son these idiots will crash there nice cars and then their fathers will buy them Junkers to punish them. He said drive this one into the ground, but not crash it and I will buy you whatever you want. Easier said than done. This thing would never die. I drove this thing around for a year, and never changed the oil, got great gas mileage and again, wouldn't die.

I decided to drive it to DC, had an interview at the Pentagon, sounds cooler than it really was. Because I was in the Military in the officers program I needed an internship, and that's what that was. I drove this car down to DC from North Bergen NJ, the closest you can get to Manhattan. On the way back home, entering NJ this things engine blew, there was smoke everywhere I was so excited, people thought I was crazy, I’m screaming good buy old man ride as people drove by with a concerned look on their face.

I then realized how the hell was I going to get back home, so I put this thing in drive and believe it or not smoking and driving real slow it made it all the way back home to North Bergen, as I pulled into the driveway it gave its final breathe. I later got a 1988 Anniversary Edition 300 ZX twin turbo, loved that car.

Comment by Joe Webb on July 28, 2009 at 1:16pm
Rob, absolutely hilarious. Just like you should always stick with your first guess at an answer, you likely should have stuck with your first attempt at parking. Though none of us can be accused of making good decisions when we were 14. It surprises me, though, that buying marijuana curbside is more difficult based on the color of your vehicle. I figured, so long as there weren't rotating red and blue lights atop your roof, it would be simple. Let's do a survey on that situation using cars off the lot from John Marazzi.

Comment by Rob Fontano on July 28, 2009 at 1:03pm
My first car was a 1971 Ford Galaxy 500. My mother gave it to me when I got my license. It was the same car that when I was 14 and did not have a license I took joy riding. I made it home just in time before my mother got home from work, but couldn't seem to get the car parked the way I thought she left it. I should have just left it the way it was and hoped she didn't notice, because after 20 odd tries at parking it straight I rammed it into the house. That she noticed. The best thing about that car was the HUGE back seat, the worst thing was that it was blue and it made it very difficult to buy weed