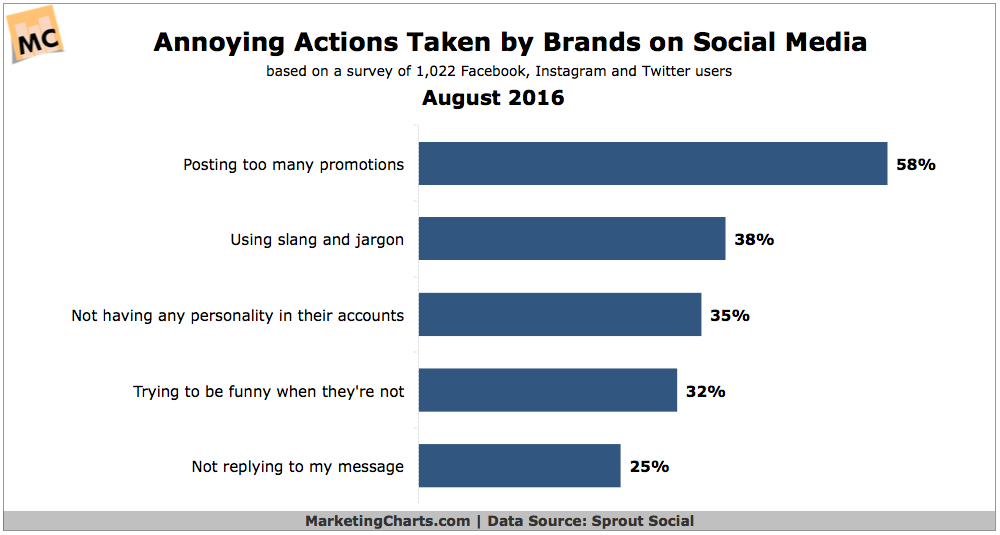 It’s a tough world out there: a recent study from Sprout Social shows that car dealers and automotive marketers need to strike a very delicate balance with their social media promotions or risk losing their followers.
Case in point: posting too many promotions is considered the most annoying action taken by car dealers on social media. But at the same time, consumers say they need to see a product multiple times on social media before they’ll buy it.

Let’s get into more specifics...

Far and away the most annoying action a car dealer can take is posting too many promotions, cited by 58% of respondents to Sprout Social’s survey, which was fielded among more than 1,000 Facebook, Instagram and Twitter users. Further back, around one-third or more said it’s annoying when car dealerships use slang, acronyms and jargon (38%), lack personality on their accounts (35%) and try to be funny when they’re not (32%).

Let’s deconstruct that for a second: some of your followers want you to have more personality, but you can’t try too hard and you can’t use certain terms. So good luck with that.  (At least there’s nothing in there about using emojis…)

Moving on to the actions that really hurt – unfollows – the survey indicates that overdoing it on promotional messages (46%) is again the biggest culprit. Tweeting too much (35%) is also in the mix, though irrelevant information is a bigger turn-off (41%). Just so you’re clear, though, you also can’t be too quiet either: almost 1 in 5 say this would make them unfollow you or your dealership. 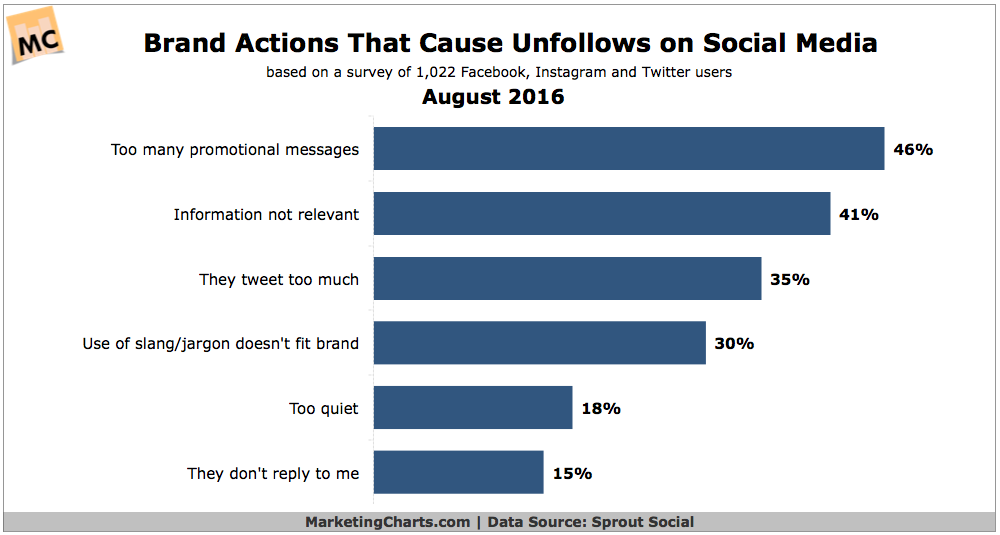 So be active, but not overly promotional. But here’s the kicker: some repetition appears to be necessary. About 85% of survey respondents said they need to see a product or service multiple times on social media before they purchase it, with most of those (61% overall) wanting to see it 2-4 times. (If you’re promoting something only organically on Facebook, this means you’ll need to post it about 6,000 times in the hope your audience sees it 2-4 times… Paid Facebook advertising is much more effective.)

[Free Ebook: The Content Marketing Survival Guide: How to Navigate ...

Social’s influence is indeed rising as a paid advertising medium: social ads are now second only to TV ads in purchase influence among Millennials, according to MarketingCharts research.

In other results from the survey:

About the Data: The consumer survey was conducted by Survata, an independent research firm. Survata interviewed 1,022 online respondents between July 05, 2016 and July 11, 2016.

So... What Drives Social Media Advertising Effectiveness for Automotive Consumers? Sponsored Social Media Content is believed to be highly effective by those who see it, according to a recent study from IZEA, which surveyed slightly more than 1,000 Americans aged 18-70, 36% of whom had noticed Sponsored Social content in the past year.
In fact, this group of consumers rates only TV ads as highly as they do Sponsored Social messages.

The results are interesting in light of MarketingCharts’ primary research into advertising effectiveness, which found this year a strong gain in the perceived influence of social media ads on purchases. The MarketingCharts study – “Advertising Channels With the Largest Purchase Influence on Consumers” – reveals that for Millennials (18-34), social ads are now second only to TV ads in perceived effectiveness among paid media.