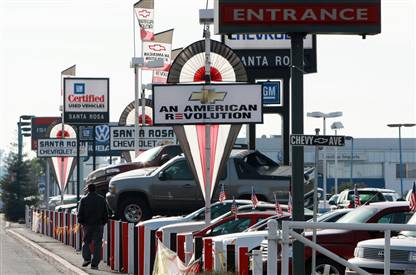 It is my prediction that the Auto Industry will exceed all expectations of the media and even the auto industry executives. It is my belief that first the competitive nature of the manufacturers will force them to produce products and programs that continue to lure the American consumer back to showrooms, secondly, auto dealers are some of the most determined entrepreneurial force in business today, and lastly the aging fleet of 250 million cars, trucks and suv's will have to be traded at some point.
So what are the odds that the American automotive owner will keep own their current vehicle for 25 years? Uhhhhh, won't happen. No matter how much Americans claim they are now committed to saving money, Americans have a seventy-five year relationship with the automobile and not even a severe financial meltdown can end that love affair and fascination with a innovative new products. From a purely practical point the median age of the 250,000,000 automobiles in the US today is over 9 years. (Mannheim Consulting, 2009 Used Car Market Report, January 24, 2009). On top of that you would never want to deny the competitive nature of the best auto manufacturers to create products that people want more than their savings. In addition to product inventions and improvements manufactures will figure out inventive new ways to provide money to consumers so that they can make sense of a new vehicle. Look for new forms of leasing programs and even longer term financing to make the income to debt ratio work.

While stagnant and even falling wages don't bode well for the auto industry in the near term, the reality is this has been happening since 2001. But car companies could continued to sell vehicles by luring individuals into their showrooms with great products and incentives that were just too good to deny. Combined that with lenders that would approve anyone with a pulse and we all witnessed an almost goldilocks moment.

The days of anyone can borrow is over and millions of Americans have lost their credit standing in the massive wave of foreclosures and defaults on credit cards and auto loans. They say it takes up to seven years after a default to rebuild one's credit score but again it is not beyond believable to see manufacturers step into the secondary credit markets in order to gain market share. Without argument the middle class is struggling with both income and credit scores. But understand that from 2000 to 2008 real family incomes fell while prices of energy, food, and gasoline went up, which the pundits claim explains why personal debt also rose to unsustainable heights. The reality is debt rose to record heights only because money was so easy to get! The pundits then claim that when income disappears one of the first purchases to be deferred is a new automobile. Let's face it the pundits don't get much right until it is after the fact. And I would never underestimate the resilience and creativity of car dealers as they are some of the most determined entrepreneurs I have ever met!


THE SHIFT TO USED
While the media makes note of franchised new car dealers selling more used cars that trend has been forming itself since the early 2000's and growing since then. Car dealers made that shift to used because the manufacturers' seeming commitment to send dealers more and more product with less and less profit margin.

A major part of the problem facing auto manufacturers—for which they share much of the blame—is that for years their new car dealer body has been focused on how to sell higher volumes of used cars in order to maximize profits. Now we see signs of rising high wholesale prices, combined with lending institutions' refusing to loan ridiculous amounts of money even to individuals with good credit, is cutting the profitability of a used car sale.

Because new car sales have fallen by nearly 6.5 million units over the last 18 months, the supply of late-model used cars will dry up sooner or later. Hence the rising high wholesale auction values today for the best used cars—and it will get worse until the manufacturer quits blaming the economy and realizes the only solution is to build great products that people want more than the money they have.

MANUFACTURER, THE DEALER AND THE CONSUMER
It is a mistake to under estimate the creative think of the manufacturer and the dealer when they work together. New car manufacturers will build new product and new car dealers will have no alternative but to find ways to again improve their new car volumes. This brings us back to the two colliding factors that the media suggest determines the fate of the automobile industry in America.

1.) Approximately 250 million vehicles are on the road now, but you can't drive them forever.
2.) High unemployment, millions more Americans with poor credit scores, stagnant or falling wages, and a negative outlook on the near term future of the economy.

The pundits state that if the public's fear cannot be assuaged and wages and employment numbers aren't improved, the auto industry will continue to suffer. But it underestimates the consumers' desire for new products to drive and the manufacturers creativity when it comes to bringing new products and programs to the market. On top of that you never want to count out the auto dealer! Of all the entrepreneurs in this country car dealers have an almost unstoppable propensity for survival! What happens with the dealer finally becomes unreasonable with his people and demands that they all generate traffic and take the concept of maximizing every opportunity to a new level. The best dealers in the country have already accepted that yesterday is over and that this moment is the time to grab market share. Face it when you are selling 16m a year everyone gets a piece of the pie making it very difficult to gain market share. I know dealers that believe because of their commitment to processes, sales training and accountability this contraction is their moment to grab not just market share but the future.

The point is don't count either the car dealers, the car manufacture or the love of the car out just because the economy is soft. All three are heavily invested in the automobile and have been for years! Whether the car runs on gasoline, electricity or nuclear fuel cells people want new cars and dealers know how to sell them. Manufactures depend on their profits from the sale of new cars. Dealers depend on the traffic generated by the new products! The consumer has become dependent not just upon dependable transportation, but the car as an identity. You think the rapper or ball player is going to quit driving an Escalade with 22" rims because the price of gasoline spikes? People will not easily give up that which they believe improves or clarifies their persona. But the media and pundits never take any of these factors into account.

BOTTOM LINE
The aging fleet of 250,000,000 cars on the streets and the infrastructure they roll on continues to worsen prematurely aging the automobile. America's addiction to the new car smell will not be broken because of the economy anymore than a drug addict quits using when he gets arrested with drugs. The public's ability to justify investing in something new rather than continue to fix something old is an easy story to sell. Either way sooner or later the vehicle has to be replaced and the American public is not used to not having what they want. This most recent shift to saving money is a new thing for Americans and the new love for saving money has not been fully validated in time. Great products sell even during tough times! Look at Activision's release of their new Call of Duty which did $550m in five days. And you don't have to look far to see someone carrying a new Iphone just because it is prettier and/or faster! While these purchases do not require major financial obligations I remember a time when $60 for a game and $400 for a phone was only for the rich!

Influencer Comment by Josh Hixon on December 9, 2009 at 10:58am
"America's addiction to the new car smell will not be broken because of the economy anymore than a drug addict quits using when he gets arrested with drugs. " -- Love it!

Great article. I am glad that Mr.Cardone is able to remain so positive when every branch of Media is filling our heads with doom and gloom. I know it's the easiest part of his job and he is happy to share his enthusiasm with us. I would be happy to read everything you have Grant, I would consider listening to your CDs again. :)

But on the serious side, Todd I COMPLETELY agree with you. Newspaper ads are a waste of time (lowest bidder wins), invest in something that will produce sales TRAINING. How many people read the paper anymore when you can have breaking news e-mailed directly to your phone FOR FREE? I will admit that the last time I purchased a newspaper is the last time I ran out of fire starter.

By the way Grant, I pre-ordered Call of Duty MW2 4 months in advance haha!

Training will not only turn your advertising dollars into profit but it will also convert a higher precentage of your "Walk in Traffic" to "Drive Out Traffic".

Comment by Todd Vowell on December 8, 2009 at 9:03pm
If dealers would take half their ad budget every month and put it into the right sales training, turnover would be cut in half and closing ratios would increase 50%. Good stuff Grant! Checked out your new “Virtual Sales Training Site” as well and if that don’t get the MOJO going, nothing will…