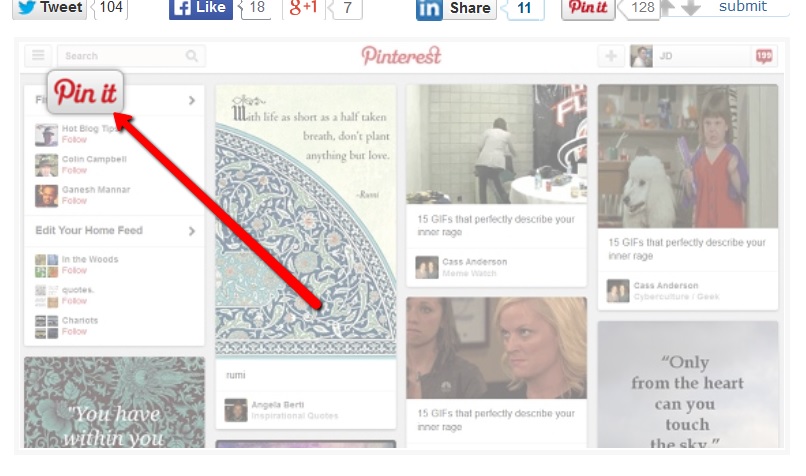 I’m not a big fan of redundancy, especially on social media. Under normal circumstances, if you have good plugins and widgets properly placed on your blog, there’s no reason to have others. If you want to annoy me with a blog post, put an inline plugin, a floating plugin, and another one at the bottom. Oh, and throw in a “Share It” widget just in case three ways to share weren’t enough.

After years of fighting, I’m actually going to make an exception to the one-place-to-share-them-all rule. I have two Pinterest plugins on my blogs now and they’re both useful. I have, of course, the standard inline plugin. Some like the floating plugin and that makes sense, but it slows the page down a bit too much for my liking and it often isn’t visible on all devices even if your blog is responsive. I follow the unspoken rule of 5, 5, or 5 sharing options (no more, no less) and I prefer the big-5 for my particular blog (Facebook, Twitter, Google+, Pinterest, LinkedIn) but there are variations to this rule that replace LinkedIn with Tumblr if there’s no business-reason to share your site. Reddit is an obscure option of you have truly viral content of general interest or if you’re the mast of a popular niche.

I recently added the jQuery Pin It Button For Images. I have held off for a long time because I’m not crazy about it graying out the images upon hover and I don’t like that it’s an overlay, but I relented and haven’t looked back since. It works. People are pinning more. More importantly, they’re pinning the right link rather than pulling it from an archive or pinning the individual image itself. It’s light on the load and does have a nice little protection of not allowing your images to be right-clicked and saved.

One might ask why I wouldn’t eliminate Pinterest from the standard sharing section. The image button does not have a count and is only visible if people hover. Some people like doing all of their sharing from the same basic area, so they both stay up. Most importantly, it doesn’t work on all mobile devices.

The best part of the button on the image is that it acts as a good reminder to visitors. On a desktop, it whites out the image and displays the Pin It button when they hover over any image with their mouse. This is a prompt, a call to action, and it actually works very nicely.

Pinterest is quickly becoming one of the most important social networks when it comes to search. Some would say that the inclusion in Bing image results was the last surge of importance necessary to put it over Twitter on the effectiveness scale. Regardless of where you place it exactly on the social signal list, it’s definitely in the top 4. It helps with search engine optimization, period.

The traffic that can come from it can be pretty useless if you’re not selling items to a wide audience, but it’s still a good bulk play. Depending on the topic, it can be the second best traffic-driving social network showing up on analytics.

Nobody knows exactly where Pinterest will go and how long it will stay so important in the whole scheme of things for both search and social, but for now, you might as well take advantage of it while the ride is still hot. This plugin is an easy win.

Good stuff, Googlebot is definitely looking for this share process, especially since robots get a feel for well developed plugins and platforms (WordPress). There's a reason ~20% of the Internet runs on WP. :-)