The J.D. Power Reliability Data doesn’t Stack Up with Demand

The most recent car reliability study by J.D. Power shows that the cars have become less reliable. People tend to think that the car quality is not what it used to be a couple of years ago. This survey queried 41,000 people who own cars manufactured in 2011. A three year old car should be almost as good as a new one? It appears not everyone agrees.

Lexus dominates the survey and is listed as the most dependable car for the 3rd year in a row. Let’s look at the data and decide how we can use it to our advantage.

The results of the U.S. study are quite different from a similar study carried out in the UK as a collaboration between J.D. Power and What Car UK. The customers on the opposite sides of the Atlantic seem to agree only on two points – Lexus and Honda are good and reliable. When it comes to the British cars, Americans don’t rate them as being particularly reliable – Jaguar, Land Rover and Mini are ranked among the last. The UK survey places Jaguar as the most satisfying car, while Land Rover is ranked #6.

When it comes to calculating insurance and car warranty premiums, reliability surveys can make a big difference. Although the warranty providers don’t necessarily recalculate their estimates based on the findings by J.D. Power, I expect them to take this study into consideration.

This also explains why the warranty premiums differ so much from car to car. Although the J.D. Power survey contains several subjective elements, it does come down to the cost of owning a particular vehicle.

While the American version doesn’t reveal the average maintenance expenses for each brand, the UK version shows the average repair bill the car owners have received after their recent visit to the dealership. It currently stands at £181 which is a good reference point for the dealers selling car warranties as an add-on product. Your sweet spot are the cars that come with warranty premiums less than £181 because it give you a good case for showing the customer how they can save money.

How does the Study Help Marketing?

From the marketing point of view, it’s very valuable to be able to understand the customer’s perspective. If they’re generally unhappy with a particular brand or model, the new survey may shed the light on the reasons why this is happening. The J.D. Power study has gone virtually viral during the last few days. It’s no longer something that only the automotive professionals look at. Just a quick visit to a search engine revealed dozens of prominent car blogs writing about the best and the worst cars.

Much of this content is trying to be a bit controversial, however, it still forms the customer opinion. What we can do is prepare to answer questions. If you’re selling Land Rovers in North America, it’s not easy to convert people who’ve already formed an opinion that all Land Rovers are unreliable. On the other hand, the UK version of the survey places Land Rover as the 6th best car in terms of owner satisfaction.

The latter two are in some sense mutually exclusive – the majority of practical cars lack in gadgets, while cars that are filled with the latest hi-tech contraptions doesn’t guarantee a practical value. If anything, they distract the driver with the abundance of gadgets and switches. I guess what I’m trying to say is that market positioning and understanding the factors that motivate your customers to go for a particular car brand is very important for closing those sales!

Discrepancies between Reliability and In-Market Demand

A reliable car and a best-selling car is not always the same thing. If it were so simple, we’d have Lexus at the top of the sales leader board and Land Rover pushed out of the market completely. Nevertheless, Land Rover has just posted an all-time sales record for January – an 11% improvement on January 2013.

Meanwhile, Lexus hasn’t had a brilliant January, posting a moderate 4.9% improvement on January 2013 – less than predicted and less than what you’d expect from the world’s most reliable car brand. So they’re now busy thinking about ways they can improve the North American sales. The goal is to double the sales but they’re going to do it on account of a big push towards the hybrid market. If they can’t conquer North America by being the most reliable car, they’ll do it by being the greenest.

I’d like to pit the findings of the J.D. Power survey against the in-market demand figures shared by Ralph Paglia here. Automotive demand is measured by the number of active in-market shoppers. The data is gathered from lower-funnel activity across various motoring websites. A good set of data is offered by Compete.com. The leaders of in-market demand in 2013 were Ford, Chevy, Toyota, Honda, Nissan, Hyundai and Dodge. Based on year-on-year change in shopper volumes, Jaguar and Jeep are the leaders. Now compare this to the J.D. Power results: Ford and Nissan sit somewhat below the industry average.

Dodge, Jaguar and Jeep are positioned pretty low down the presumed "unreliable" end of the list. 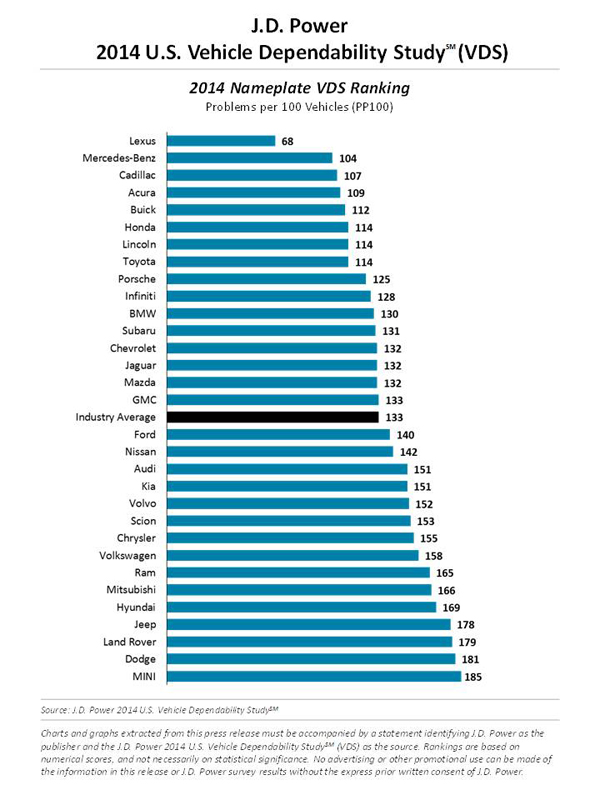 Based on this, we can come to two conclusions – surveying 41,000 car owners may not be a sample big enough to figure out which brands are the most reliable, although there is obviously some truth in what J.D. Power have published. Secondly, it tells us that marketing and branding is what really determines the car sales.

Toyota keeps struggling with the recalls, some Nissan models have reliability issues, Ford isn’t what it used to be a few decades ago – nevertheless, all three brands are in high demand. What can we learn from their marketing efforts?