The Dangerous Duality of Social Media 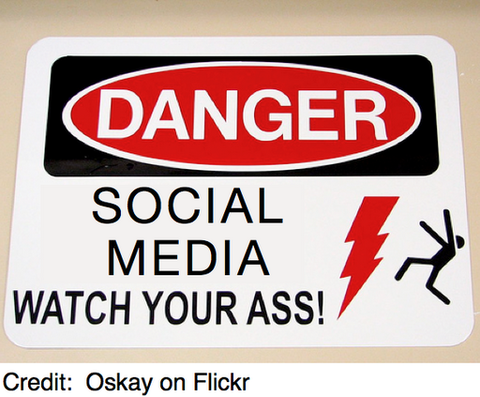 It’s a powerful tool, one that can truly further your business and bring in customers, but it can hurt you just as quickly. Like any tool, in and of itself, it can only take you so far; it performs based on the skill of its user. That’s why its crucial that you make sure you have the right people in charge of your social media marketing, because it can turn on you in a heartbeat.

Social media is often times the face of our company. We build our brands on Facebook and Twitter, amassing followers and fans, and sometimes forget that they have an equal voice. Sure, we can market and entice to our heart’s content, but they can come right back at us if they have any complaints. Mishandle these complaints, and you’ve just made a fool of yourself in front of your targeted audience. I’ve seen good companies take deep cuts because they’ve had the wrong person running their social media...sometimes it’s so bad, there’s no stopping the bleeding.

An amazing example of this happened just last year. A man, lets call him Richard, ran PR for a company, lets call it ABC Marketing. A customer complained about a shipping delay on a product, and Richard’s response was brusque to say the least. They started to exchange messages, but now media and social outlets were being included in the dialogue by way of email Cc, Facebook posts and Twitter hashtags. The customer was being difficult, annoying, and petulant...but sometimes customers are all those things and worse. The problem is that Richard began giving it right back, and then escalated it by saying this:

“I Don’t have my controller so I'm gonna cry to the world … Really ?? Hey take that free time and do something more productive. All you had to do was check the like everyone else , people have inquired but you’re the douchiest of them all
[sic]”

The backlash was incredible. Orders were cancelled, Richard was fired from ABC Marketing and ABC Marketing was fired by the manufacturer. The company’s Twitter and Facebook pages exploded with negative press to the point that they were forced to change their name. It has been about six months and people are still putting out the fires started by one man’s grotesque mishandling of PR and the resulting social media backlash.

Use this as an example (admittedly an extreme one). Don’t argue with customers online. Even if you’re right, hell even if you’re polite, you still come off looking bad. If the argument can’t be helped, be concise and reasonable even in the face of vitriol and assault. Try to direct the discussion to a phone call or other private venue. Email is better, but don’t be fooled into thinking it’s totally secure. Sure, Facebook and Twitter are immediately public, but it’s a simple matter to capture an email exchange and post it on social media for the world to see. You need to consider every word you put on the web, because (ideally) your message will be seen by innumerable people.

That’s the crux of the issue. You want your message seen by people, and not just any people, but potential customers. You build your network and if everything goes according to plan, every post you make is seen by your target demographic. If you perform well, you’ll gain goodwill. But if you make a mistake, that same group of people you’ve been courting and cultivating will view you in a whole new light.

Social media is a knife without a handle--a powerful tool, a remarkable tool--but one that can cut you if you don’t take it seriously.

Original article about the dangers of social media posted on Wikimotive's Blog titled Social Media: A Knife Without a Handle

Thanks for all the positive feedback!

Great post Mr Martell, once againg reminding us all in the auto world even remotely involved with Social Media on behalf of our employers how easy it can be to have a mole hill quickly grow into a mountain, if only common sense were just a bit more common! Thanks for the words of wisdom! :)

Tim, thank you for such a poignant reminder of why people need to acquire some basic PR skills if they are going to represent a dealership, or any company on the social web. I have seen many similar examples, some almost as bad, but specific to the auto industry.  For example, I have seen dealership managers respond to negative DealerRater posts with public replies that basically stated "I knew we never should have sold you a car!".  This of course, was a true statement, but ends up hurting the dealership far more than the customer's negative review.  In almost all cases, anything negative posted by a customer about a dealership should be immediately and publicly responded to with a sincere apology and a statement that the dealership management would like to work directly with the customer to make things right and resolve the specific issues... Always restate the customer's complaint in your own words to show people that your dealership genuinely listens and the response is NOT a template... Keep in mind that a dealership's response is not REALLY for the customer who posted the complaint, but is really intended to show the hundreds or thousands of prospective customers who see the post, that the dealership not only cares, but is responsive to customer concerns, wherever they are expressed.