Before learning techniques, you must enter into a social media mindset. Being active and involved in social networks currently is not necessarily the only thing that you’ll need to enter into the right mindset. You’ll have to step away from the selling part of business to understand the best way to sell on social media. 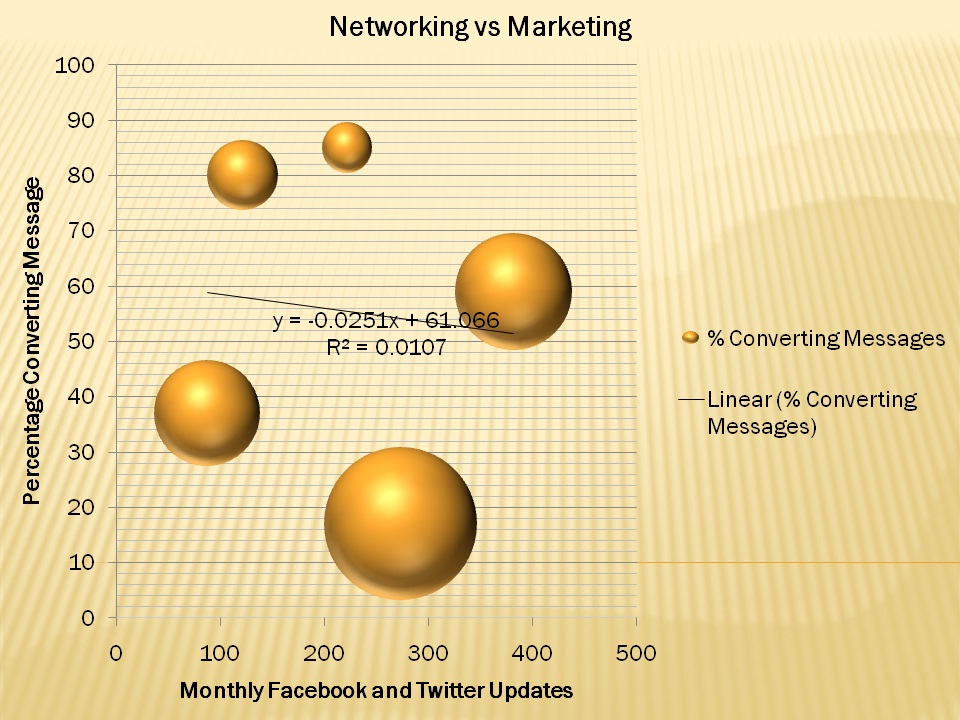 We’ll go into more details shortly about the specific differences between a Converting Message and a Conversational Message, but for now understand that converting messages lead social media contacts (Twitter followers, Facebook likes, Blog readers, etc.) to a page or location where they are intended to become a conversion. Everything else is a conversational message.

One thing should be very clear: the less they try to sell, the more effective they are at doing it. The dealership with the most leads had just under 300 updates, but less than 20% of those updates were converting messages.

They might as well have been saying “Me, me, me, me, and more about me. Oh, and did I mention me?”

Unfortunately, their style is the most common by far amongst dealers currently attempting to utilize social media in their marketing efforts.

There are distinct algorithmic reasons that you want to converse much more and attempt to convert less, but let’s look at it from the visitor’s perspective. Remember, they aren’t going to Facebook to buy a car. They’re going to Facebook to share, relax, enjoy. They want to see interesting posts, follow entertaining links, and generally get away from business (for now).

Through participation and by engaging in conversations, you can affect the placement of your converting messages. Again, more detail on that shortly, but the valid business reason for engaging in conversation rather than selling, selling, and more selling is that your converting messages will be much more visible both algorithmically and through the appreciation of your audience if people enjoy what you post.

It’s been said before and will be said again: the “social media mindset” is similar to the “cocktail party mindset.” If you walk in and join the conversation, share some laughs, discuss some interesting topics, and generally participate in the party, people will like you more. If the conversation comes up about cars, you talk about it. If it never comes up, as long as you have been likable throughout you will be able to bring up the topic of cars and people won’t mind. They will be much more likely to discuss the topic with you in dialogue.

If you walk into the cocktail party and start telling everyone about your cars, you will not be liked. Most people will avoid you. Some may even make rude comments to your face. Most will only be thinking rude comments about you. You will be a monologue without an audience. Nobody wants to be “that person.”