Social Media ROI for Car Dealers is Not Well Understood 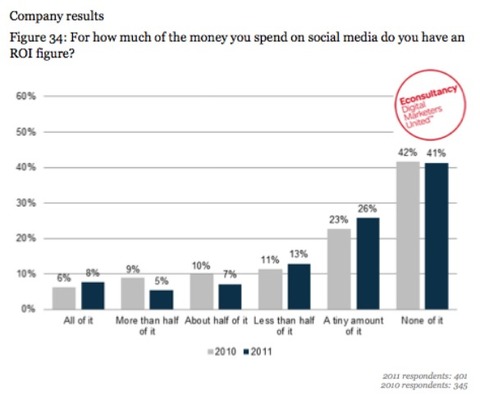 40% of Car Dealers do not have a return-on-investment (ROI) figure for any of the money they spend on social media marketing, according to [download page] a November 2011 report from Econsultancy in partnership with LBi and bigmouthmedia.

Data from the “State of Social 2011 Report” indicates that an additional 26% say they can only attribute an ROI figure to a tiny amount of the money they spend on social media. Just 20% say they have an ROI figure for at least half of their social media marketing investments, representing a 23% decrease from 26% of respondents in 2010. According to a study released by IBM in October 2011, 62% of automotive executives cited lack of ROI certainty as a barrier to using new technology, while 68% reported feeling unprepared for social media.

Problems with Measurement Down, But Remain

The supply-side findings are similar, though slightly more encouraging: the proportion of agencies who say their clients are unable to measure social media value has fallen 38%, from 34% to 21%. Among those who measure value, 23% say they see a greater return from their social media marketing activities, virtually unchanged from 2010, while 21% see comparably less value, up 24% from 17% in 2010. One-third of agency respondents say their clients see similar returns than other marketing activities, up 38% from 24% in 2010.

Although many car dealers and automotive enterprises struggle with social media ROI and value measurement, the vast majority of companies (79%) and supply-siders (87%) plan to increase their spending over the next year. The proportion of companies who expect their level of investment to remain the same has risen 25% from 16% in 2010 to 20% this year. 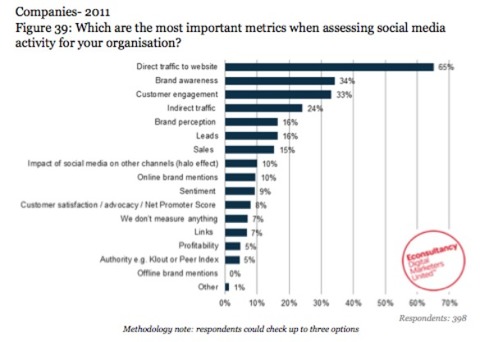 Over 66% of Car Dealers report that direct traffic to their dealership website is one of the 3 most important metrics used to assess social media activity, roughly double the proportion to attribute that importance to brand awareness (34%) and customer engagement (33%). Compared to 2010, the proportion signaling sales to be a top 3 metric has tumbled 48%, from 29% in 2010 to 15% this year. By contrast, sales (30%) and leads (23%) are far more important to supply-side respondents, although direct traffic (69%) remains the top metric among them also.

According to the Q2 2011 Quarterly Digital Intelligence Briefing from Adobe and Econsultancy released in July 2011, 91% of marketers believed social media traffic volume to be an important metric, although just 31% reported currently measuring the value of that volume.

About the Data: The Econsultancy report is based on an online survey of more than 1,000 respondents, carried out in September and October 2011. Respondents included client-side marketers (or PR and online communications specialists) and supply-side respondents working either independently or for a range of different types of agency or technology vendor.