Combined advertising and promotional spending will hit $38 billion by 2015, roughly 440% more than the $7 billion projected for 2010, according to a new white paper from Borrell Associates.

Combined advertising and promotional spending will hit $38 billion by 2015, roughly 440% more than the $7 billion projected for 2010, according to a new white paper from Borrell Associates. 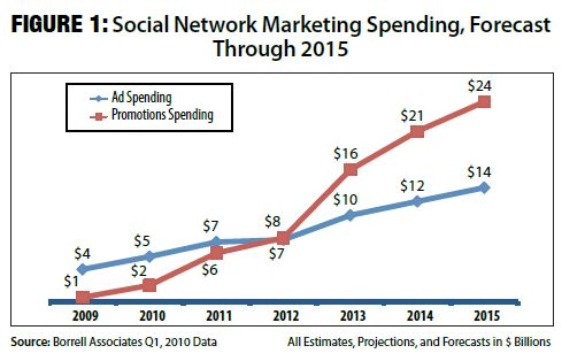 Although Borrell data shows social network advertising spending will remain at lower levels than promotional spending through the next five years, the total growth rate will be an even higher 600%.

Borrell analysis indicates the rapidly growing marketing spend in social networking is fueled by wildly climbing consumer use of social networking services. The paper cites data from comScore which says Facebook alone had more than 100 million unique visitors in the US last December, out of 400 million registered users worldwide.

The average Facebook visitor came to the site 27 times during that month, almost once a day. As of the end of 2009, one hour in every nine spent online was spent on a social network site. More than two-thirds of the nation’s largest businesses recruit new employees through social networks, and 13% more plan to start this year.

Asked to rate various technology tools on a scale of 1 to 7 (7 meaning extremely important and 1 not important at all), the average respondent to a recent Gartner study rated social networking tools at slightly more than 4. Social networking only ranked ahead of four other tools, all of which have a social media aspect: wikis, social tagging/bookmarking, web feeds and blogs.

Email was clearly ranked as most important, with an average score near 7. The only other tool to receive an average score of more than 6 was group calendars/scheduling. The top five tools were rounded out by web conferencing, team workspaces, and simple end-user tools.

Here's a couple of high-dollar Borrell Associates Reports on Social Media Marketing in PDF format for your download convenience: