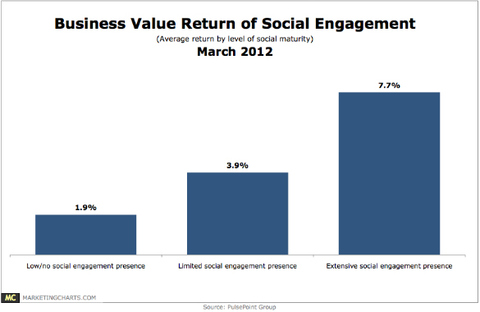 The most socially engaged automotive enterprises are experiencing business value returns 4 times higher than those who have the least social engagement presence, finds PulsePoint Group [pdf] in March 2012 survey results.

Respondents were asked about the impact social media is having on a range of areas including sales effectiveness, operating margins, revenue growth, and product innovation. Extensively engaged businesses reported a 7.7% business impact on these key areas specifically from their social engagement, compared to 3.9% for those with limited social engagement presence, and 1.9% among those with the lowest social engagement presence.The report defines socially engaged enterprises as those that actively engage customers in meaningful conversations enabled by social technologies, to the benefit of both parties.

The study also finds that most senior executives in the US and Canada see a variety of advantages from their social engagement. The most marked among these is improved marketing/sales effectiveness, cited by 84% as a benefit of social engagement. Other areas where a high proportion of executives see advantages from their social engagement presence include increased market share (81%), improved product/service quality (68%), improved brand or stock value (67%), improved collaboration with partners (65%), and improved speed to market/innovation (65%). In fact the only area identified where less than a majority saw an advantage was in decreased costs (37%).

Most See Impact on Brand

Looking at where respondents see impact from their social engagement, increased perceived value of the brand/stock value tops the list, cited by two-thirds of the senior executives. 62% also say that social engagement increases revenues, and 58% say it increases market share. A majority of executives see no impact on improved operating margin or decreased cost of sale or production, though.

In what has become a recurring theme in the social space, the inability to prove ROI is the top challenge to deeper social engagement, cited by 45% of respondents, ahead of legal or regulatory concerns (33%), and an unclear strategy for change (32%). In fact, 28% of the senior executives said they are not measuring the impact of their social engagement initiatives, while 28% are relying on executive intuition.

About the Data: The PulsePoint Group data is based on a survey by The Economist Intelligence Unit conducted in February 2012. There were 329 respondents from the US and Canada representing 19 industries. 47% were C-level executives, including 31% who were CEOs. The BRANDfog data is based on a survey of several hundred employees of diverse companies, spanning in size from startups to Fortune 500 companies, and working at all levels of their respective organizations.