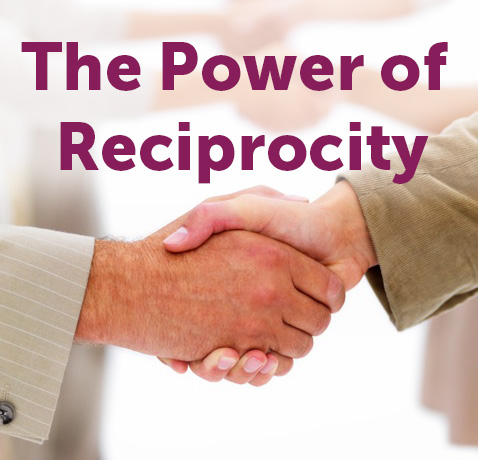 The power of reciprocity lies in that it is pervasive throughout the world in all cultures. It has even been credited for developing a system of indebtedness that helped social advancement throughout history.

The feeling of indebtedness made a huge difference in societal evolution because it meant you could give away food, tools, or ideas without the feeling of “giving them away” Or losing out. After all one party has to start this giving process and because our brains don’t want to be in debt, person who started the giving doesn’t have to fear if their actions are returned. For example if you’re a caveman who knows how to hunt, you can teach they guy in the cave down the street. Now, following the law of reciprocity he in turn teaches you how to make a loin clothes out of saber tooth tiger pelts. Over time this type of sharing catches on and grows exponentially, then eventually becoming a corner stone of societies throughout the world.tyy

There are two types of reciprocation: One is Emotional. For example, paying a complement or saying, thank you, the other party is social obligated to say you’re welcome. The second is physical. For instance your neighbor sees you have a car loaded with groceries and helps you bring them in your house.

Well the next time he asks to borrow that fancy power saw, you never let anyone even touch, let alone borrow, you relent because of the reciprocity bias.

-Now let’s talk about how to make this work for us in sales.

At its most basic level, reciprocity laws help in sales because if you do a favor for someone, they are more likely to comply and agree to purchase. However, while this rule seems straight forward, there is a bit more to it.

What do I mean?

One of my favorite studies that illustrates the power of this bias comes from the restaurant industry.

The study asked the question, does the amount of tip increases when a server gives each person a mint with bill?

What they found was when the server gave one mint there is only a 3% increase in tips. But when the server upped it to two mints, tips went up a whopping 14%! And finally, get this, if the server offers one mint but then stops on a dime turns back to the table and says, “for you fine people here’s an extra mint”, the tips increased all the way to 23%!

This study offers a perfect example of the 3 keys to making the reciprocity rule work for you:

Let’s walk through the study again taking into account these rules:

Another way reciprocity can help you is recovering from a bad 1st impression. If you remember my video on providing a world class meet & greet we said a good first impression is important in sales because it helps the guest like us. Liking, is another cogitative bias (covered in video: How to Use Cognitive Bias in Sales) that leads a favorable judgement about another’s traits that haven’t even been displayed. The bad news is Liking bias works both ways, meaning a poor 1st impression leads to dis-liking bias, which is an assumption that your entire character must be bad. Well, here’s some good news, reciprocity can save you!

What do I mean?

Say you got a flat tire on your way back to the dealership from lunch and are late for your appointment. Your guest has been waiting for you and when you arrive they are noticeable irritated. You know from a previous conversation that your guest is an off road enthusiast, who goes mudding, driving their truck though those types of trails. When you meet with them you apologize and give them a free car wash voucher at one of those quick, assembly style, inside and out cleaning facilities, stating I am sorry I got stuck in traffic, here’s full wash & clean voucher to make up for your time and help make your truck look nice after one of your weekend trail riding adventures. They guests body language and verbal tone instantly change to the positive, 1st impression saved!

It worked because we followed the 3 keys to reciprocity by:

#1 initiating the giving, #2 gave an unexpected gift and

#3 you personalized and showed off your listening stills by mentioning their love for off-roading!

Now you’re back on track because Reciprocity trumps the liking in the world of cogitative biases!

That’s an example at the beginning of the sales process, however let’s look at how we can use it after the sale. This is true story of how I used reciprocity years ago when I was selling cars….Okay it was back in 1992, so maybe a few decades ago!

I had this guest who was just starting with working with Illinois Dept. of Transportation. He had the entry level job of holding the “slow” down sign. He purchased during mid-west summer wave with temps in high 90s for a week straight. Typically the week after a purchase I sent my guests a post card, reminding them I pay for and requesting referrals. For this guy I got a few Gatorade powder packets and put them in an envelope with the referral message.

I included a hand written note that said, ‘I’ve been thinking of you out on the road crew during this heat wave. Stay cool!”

This guy became a dealership ambassador and my personal spokesperson for the next 19 years, purchasing cars all his cars and sending everyone he knew to see us. Once again I had all of the 3 key elements for making reciprocity work:

-Let’s now talk how this reciprocity bias can back fire and have you agreeing to an uneven exchange. Ironically, the rule that help move society forward by promoting equal exchange between parties, can be used to create unequal transactions.

To explain, let’s return to the example neighbor helping with groceries and we returned the favor by letting him borrow your expensive power saw that you never lend to anyone. Before you agreed to lend it out, you were a little reluctant because he’s getting the better end of the bargain. After all, he only carried in two bags of groceries taking all of 2 minutes. Just to rent a power saw like yours it would cost him $50 per hour!

If it’s so unfair why did you do it? It’s the law of reciprocity once again at work. The law allows for your neighbor to pick the first favor and then gets to offer the “get out of debt return favor”, you are open to get played, resulting in an unfair exchange. The immense desire for us humans to even the score pulls so hard that we accept uneven exchanges just to get rid of that uncomfortable feeling.

And there’s another reason. Because reciprocity is universal social norm, we don’t want to be disliked by flying in the face of this norm and not returning a favor. Being known as a Mooch is such a harsh label, that we are willing to take get short end of the stick on the favor exchange just to prevent this from happening.

Reciprocal compromises is another way to create an uneven exchange between two parties. It’s more stealth and possible even more powerful than the. “Do something nice for someone and they do a nice thing for you”, approach.

Let’s take the example Cialdini talks about in his book, Influence. While Dr. was walking down the street one day he was approached by a Boy Scout while who asked him to purchase tickets to a Boy Scout sponsored circus at $5 each. Dr. Cialdini declines. The young man then asks, well how about helping us out by buying a chocolate bar, they’re only a dollar each. Dr. Cialdini whips out $2 and buy two…and he doesn’t even particularly like chocolate bars! This illustrates the final aspect of reciprocity bias…we are obligated to make a concession to someone once they’ve made a concession to us.

An example of using the reciprocal compromise to help in sales can be seen used by finance managers in car sales when asking a guest for a cash down when financing the car.

First he manager makes it known that most lenders like to see 20% of the selling price as down payment, then giving them the reasons it is good for them to more money down.

Most guests say, I didn’t want to put any money down.

The manager then asks, how close could you come or could you put down 10%?

Finally the manager calculates the tax, title and license fees, then says “you don’t want to finance these fees do you?

Even when they originally stated NO money down. I would estimate this approach still works 50% or more of the time.

While this is a good example of how the reciprocal compromise works. I don’t feel that an unfair exchange is gained by either. In fact there is quite a bit of benefit in putting money down because it lowers amount financed which translates to a lower payment and interest charges.

The reciprocity rule is essentially helping the guest get past a short term inconvenience that comes with an even greater long term benefit. Similar to a personal trainer helping clients push through short term pain to get to long term gain!

Due to the rule of reciprocity influencing the compromise process, it could lead to the compliance method that can easily be used as a negotiation tactic. It’s called “reject-then-retreat method.” If we return to the Boy Scout example we see how it works: Dr. Cialdini rejects the BS first solicitation, then Boy Scout retreated, made a second request, which was accepted.

Whether the Boy Scout did this intentionally or not is unknown. We would like to think no, however maybe he had a greater incentive to sell chocolate bars and purposely offered the circus tickets as sort of a “throw away” request?

Either way, the result was still the same. The reciprocity rule has great power and that power can be used for ill intent.

Spiderman’s Uncle Ben said it best, “with any great power, comes great responsibility”. We should use  the power of this rule, but also be aware of its capability to make us either the victim or the perpetrator of the power that lies in reciprocity bias!

Here's the video of part 2, of reciprocity bias in sales ....https://youtu.be/HqPEZESU4nk