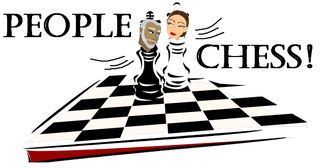 There’s a real human talent in arranging the right pressures (positive and negative), at the right time, on to the right people, to get a desired result.  It’s a hallmark of effective leadership, in fact, and the name “People Chess” is an easy way to summarize this talent.   And we all know its uses in relationships of all kinds, really, both to us by others and by us to others.

Every organization is led by someone with this talent, and every organization has several people who are strongly playing People Chess.   And it’s not only used in leadership:  It’s also used by people pursuing a leadership position in order to establish the early hierarchy that leads to that position.  And it can even be used during a temporary leadership position such as deciding where a group will go for lunch!

And it’s certainly not without risks and misuses.  Hardly!  Like actual chess, it’s even possible to play People Chess well and still lose—so we need to improve our skills as far as we can, if we want to play.  However, unlike actual chess, it is also possible for People Chess to be played poorly, or to be played for nefarious purposes (shamefully), and then folks on the chess board—who are not pieces, but people!—can be hurt.  Sometimes badly, and sometimes irrevocably.

And know that you will not always be able to arrange that priority within every move of People Chess.  Realistically, there is no “best for the people in the team”, for example, if another player has a bad motivation in a move that forces you to consider the organization first in your reply move.  And that's okay.  Just be careful with it.

Finally, don’t forget that, though People Chess exists no matter whether we choose to play or not, we have a human responsibility to sincerely aim at a good outcome for those involved.   No matter how anyone else plays, aim to do right by the people that you work with and lead.

Because, if you take shortcuts towards your goal that will hurt people, then just hope you never play People Chess like that against me.  Or against someone like me who cares about people, not pieces.

Aim high and positive, do right by others, and rally your skills in People Chess.  Your organization needs you!  :)

Excerpt from the book "I'm Not Listening as Loud as You are Talking!" by Keith Shetterly
Coming November 2012 on www.Amazon.com.
Copyright 2012,All Rights Reserved
www.keithshetterly.com keithshetterly@gmail.com

Thanks Kathi!  My book "I'm Not Listening as Loud as You are Talking!" will be available in November on www.Amazon.com as both print and for Kindle, self published through their processes there.  :)

Nice post Keith. I love the name of your book, too! I'll mark my calendar for November to make sure I get a copy. Are you self-publishing and are you going to sell it on Kindle?