The most-frequently cited reason Facebook users give for “unliking” a dealership's Fan Page is that the dealer posts too frequently, according to [pdf] a new report from Exact Target and CoTweet. Data from “The Social Break-up” indicates 44% of Facebook users list this as a top reason for clicking the "unlike" link on a dealership's Fan Page that they had previously clicked the "like" button for.

Virtually tying overposting as a top reason for unliking a dealership on Facebook is having an overcrowded wall (43%, more than one answer permitted). Other leading reasons include content becoming boring and/or repetitive (38%), and only liking a dealership or car company to take advantage of a one-time offer (26%).

Report data indicates car dealers will often know when a Facebook fan changes their mind, as 43% of Facebook users will unlike a dealer's page when they no longer want to see its posts. Another 38% click the “X” in their news feed so they don’t see the dealer's posts and 19% do nothing but ignore the posts. 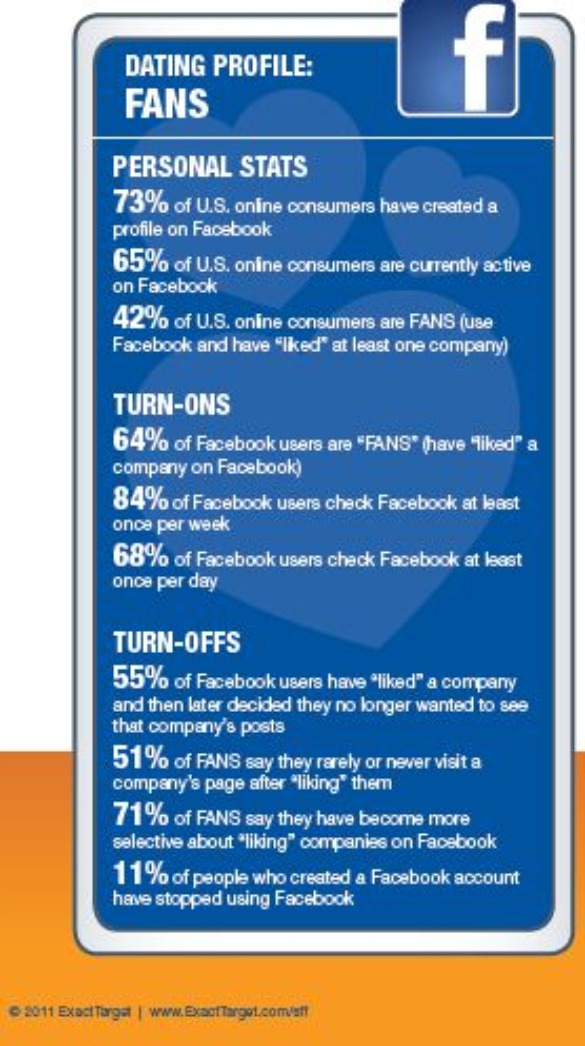 Fifty-five percent of Facebook users have liked a car dealer or OEM brand and then decided they no longer wanted to see its posts. In addition, 51% say they rarely or never visit a dealer's Facebook Page once they have liked it. A full 71% of fans say they have become more selective about what brands of cars and dealerships they like.

Report data show that a consumer’s decision to “unlike” a car dealer or OEM brand has surprisingly little impact on the perceived likelihood that they will buy from that dealership or brand of car in the future. In total, 63% of automotive consumers said they were as likely or more likely to purchase something from a car dealer after ending their Facebook relationship. Another 18% said they only “unlike” a dealership or car company Facebook Page if they never bought a car or had their vehicle serviced at the dealership in the first place.

Facebook represents the largest share of time spent by US based Automotive Internet Users (AIU) of the top five most-visited websites, according to a new white paper from comScore. “The 2010 US Digital Year in Review” indicates that Facebook increased its share of total US internet time among automotive consumers by 71% between December 2009 and December 2010.

Comment by Joey Little on February 16, 2011 at 1:53pm
Emotional Connection receives an emotional reaction.  People on Facebook delete pages they have no connection to, they do not delete those they they have an emotional connection to.   Red Bull, one of the top 10 Facebook fan pages with 15,182,582 followers, posts about twice even three times a day.  Their numbers increasingly go up.  It doesn't have anything to do with how many times you post it's what you are posting.  I always say 6 to 1.  6 emotional connection type posts to 1 sales post.  So many dealers look at other dealers fan pages when you need to look outside the industry every once in awhile.  Every business fan page is doing one thing in common...Selling!

@ Stan - There is an answer and that is connecting the dealer and the community with a higher calling, something that community is passionate about and thus allows for a stronger connection. As an example Metro Honda of Union County is doing the Union County School Pride Project where they are giving away $5000 to the school that shows the most pride, then each week they have other prizes such as computers and stuff to giveaway in weekly challenges (to be up front they are a client). The support has been unreal with local business also donating stuff, they have reall brought the community together. Almost daily people are coming in to the dealership whether its to sales or service and saying that they are a fan on Facebook and love what they are doing.

In other words the marketing message that they use on Facebook isn't marketing at all, in fact they are using Facebook as a way to connect to the community, not car buyers... therein lies the difference and why they are seeing a tremendous amount to success.

Numbers that jump out at me are that over half of Fans never visit the dealerships page again after Liking them, and when the get tired of the company nearly 40% take them out of their feed - so dealerships have an inflated sense of how many Fans they are reaching.

In looking at the reasons people stop liking a company (and the most recent post to Park Cities Ford below) it raises the question - what content can a dealership really provide that isn't marketing, repetitive or promotional?  I think the reason everyone here stresses content is that no one has really figured out what that valuable content is.

I'm not sure there is a real answer other than wishful thinking that consumers want to hear free marketing messages from my business.  But as more people are more careful about Liking businesses, and more are unliking them or turning them off their feed, the hopes and dreams of selling cars through Facebook fan pages maybe losing its luster.

In order to create an influential community three types of connections must first be established:

Below, Kelsey mention that she posts only 3 times per week but to use a strict number like that can have detrimental effect on your ability to create community because some communities will require more, especially if its a truly engaged community.

When a dealer community reaches the level where people are going to their Facebook Page to communicate with other members it's important for the dealership to post on a daily basis, maybe even more, if they want to be part of the "bonding" going on.

While trying to figure out the level of dealership posting consistency its important to take a look at your Facebook insights to ensure that your "unliking" isn't disproportionate to your number of new likes.

Comment by Kathi Kruse on February 16, 2011 at 7:39am
I totally agree with Harold Elam. Content is king with any type of Social Media. When we take on a new client, we meet with them to formulate a content strategy. Engaging the customer, delivering messages that are relevant, recent and local are going to win the game. If the dealer is not interested in this, they they might as well not be on Facebook or any other Social Media. There are so many dealerships out there posting stuff that is relevant to them (which they think is relevant to their customer...but it's not...and that's why people 'unlike' you). There's no easy way around good content but if you put in the effort, time and budget for it, it does pay off with long-term sales relationships.

I don't know how Park Cities Ford does their content management for Facebook.  But I noticed multiple posts by them the last day or so.  And I liked it.  I can see where someone would NOT like it, but these most recent posts show customers with their new/used vehicle purchase.  Happy customers.  Shiny cars and trucks.  What's not to like?

I'm just glad they stopped spamming out-of-area Craigslists.  I told them about how the Waco CL and East TX CL's were flooded with cars of theirs from Dallas.  They took care of it.  Now they only flood Dallas CL.  And that's where they belong, and that's OK, each post has a different vehicle.

I'm sure PC sells a lot more than 2-3 vehicles a day, but it seems about right to show the people who agreed to have their mugs and their new rides features on the FB page.  I know when my wife and I go to pick out our new Explorer here in a couple months, we'll be happy to show her and her new truck off ourselves as well!

We try to only post 3 times a week on our dealer's FB pages and we try to vary the messages of the posts. You don't want the same ol' posts to appear as updates on someone's news feed every time they log on.

I'm curious what kind of posting strategy dealerships have...