On Social Media, They Don't Have to Follow You to be Listening

Some people have a misunderstanding about what is seen and heard through social media.

It's happening on two major fronts: personal communications and business communications. Both are completely separate, but the fact that the same basic premise popped up from both angles made picking out this blog topic a no-brainer.

I was talking to a family member who made a surprising statement. "I wish [redacted] was following me on Twitter so I could tell him how I feel about [redacted]."

They don't have to follow you to be listening. More importantly, just because they are following you doesn't mean that they're listening. It's a minor point but we have to get that out of the way before moving on to the business reason for this post...

Customers See Your Business Social Profiles and Pages without Following You

The second instance of misunderstanding came on the same day. I was talking to a potential client who said that they're not worried too much that their Facebook and Twitter accounts hadn't been updated in a couple of months. "We only have a few followers, anyway. It's not like anyone can see these pages."

I had her show me her website analytics. They, like many websites, had links at the bottom of their homepage to their social profiles. The number of clicks from the page to the social profiles wasn't large, but I pointed out that the people doing the clicking were potential customers. Why would they want potential customers to see a lack of efficiency and follow through? Some people hold Facebook and Twitter as important communication tools and when a business demonstrates a lack of interest in social media, it can speak poorly about the company's willingness to listen to and communicate with their customers. She quickly understood the point and declared that she would have the links removed immediately.

We went to Google and looked up the business by name. Facebook was ranked #3. Twitter was #7. She started frowning.

If you're going to have a social media presence, you must either keep it up to date or declare very clearly that you're not active on social media and offer an alternative method of contact. I've never seen it done before (I always push for option 1, of course) but I have heard of businesses leaving their top post as "This is our Facebook page, but we prefer talking to you directly. Please contact us at..."

It's not ideal, but it's better than letting your social presence be an embarrassment.

As social media continues to expand, understanding that your lack of involvement does not mean that your customers aren't looking at you is a must. When you stick your head in the sand, what are you presenting to people looking at you? Your tail end.

Alexander - amazing input that adds to the conversation, as always. Great graphic and advice.

Cathy - as Ralph said, that's way too common, and now that I'm getting more into direct social media for car dealers I'm learning what Ralph already knows all too well.

Ralph - Using knowem for that purpose - absolutely! It's the first step in any business endeavor, even seasoned businesses like car dealers that are just now getting into social.

Ralph, yes, that was somewhat of a surprise to me (social media advertising), which makes me think I might be correct in terms of what I've assumed all along. Google giving credit to your site for paying for SEM. Maybe it's a very small part of the equation, but I've always had this hunch.

This site is a good example of "guest blogging", on a bunch of levels.

Cathy Nesbit - I had the distinct pleasure of leading a team of social marketers that set up daily social media marketing services for over 600 dealers during an 18 month period. One of the situations that we encountered far too often was when an employee of the dealership had set up a social media account or profile and then either left their job at the dealership, or the dealership did not have a clue as to who set up the account. We found that in the majority of cases, the dealer or GM was unaware that such accounts/profiles had been set up.  Getting rid of those "Spurious Profiles" as we called them, was a pain in the butt and took way more time than initially setting up such accounts.

Of course, we all became adept at merging Facebook Pages and learning who to contact at each social network or site, but we also learned that there is a real issue around dealerships having and disseminating "Social Media Employee Policy" that sets the rules for such practices by employees. Today, I recommend that a dealer's very first action regarding social media should always be to create a policy draft at http://socialmedia.policytool.net/ then export it in a Word document, send to the dealership's corporate counsel for review and approval. Once approved, get every employee to sign a copy and place it in their HR file.  This will not prevent all spurious profiles from being created, but it is a good start.

Alexander Lau - Thanks for the great Penguin Infographic... I especially like the acknowledgement of the value around Social Advertising when used properly to drive engagement.

If you're not measuring your social signals for its SEO value, you're going to want to in the very near future. Example below, showing the five largest, minus Pinterest value. Measures Top Conversion Sources as long as your Google Analytics Goals and Conversions are set up properly. 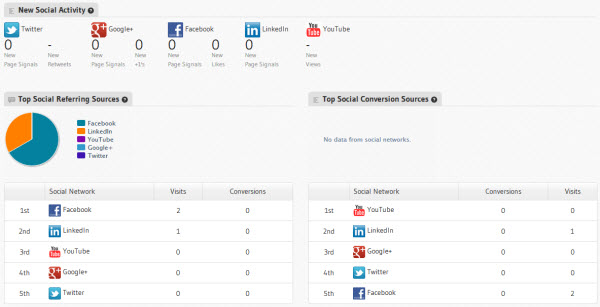 It's much like SEO, hey our competitors are doing it incorrectly, not paying attention to algorithmic updates, etc. Fine by me, you keep on sucking and it makes my job a lot easier...! Take into consideration 10% of SEO or Social and easy sailing. Speaking of which, forget the engagement and conversion potential, those ignoring their social signals are going to see their domain authority take a DIVE BOMB! Bye, bye birdy, well actually not a Penguin is a bird, right??? Hee, hee...

I love seeing social media profiles of my competitors that have been created and abandoned. The longer, the better. One of my competitors has a link from their website to the Wrong twitter account! What's better than that?! :)

I find it interesting when a company (dealership) creates a social media page, adds a few meaningless comments and then lets it sit and sit and sit and sit and sit. Partly, they'll feature a direct link to their social pages (with stale content or no content) from the top of their website (users find it and think, "why have it if you're not going to keep at it with orginal content") or they don't feature it at all and ignore the fact that a user can search for their brand + keywords like 'Google+', 'Twitter', 'Facebook', etc. and find the same lame social page. Since they don't plan on resourcing their social pages (most of these cases never planned on it in the first place), they end up wanting to delete them and find it difficult to delete the page. Maybe social networks make it difficult, but that's only in their best interest. It just comes down to the fact that most groups don't take social media seriously and fail to adhere to best practices.

As for social media page domain authority, the example that you've mentioned is fairly typical. Not only do most ignore their social content, but the fact that it ranks well per their brand name, as well.