Horsepower matters but mileage is the mandate.

by Paul A. Eisenstein 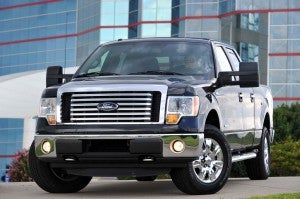 The pickup market, though barely half the size of its one-time peak, is still a viable – and profitable – force in the U.S. automotive market.  So, expect to see Detroit makers, in particular, do everything they can to retain the segment’s viability – though that won’t be easy, especially in light of today’s announcement outlining tough new mileage standards set to reach more than 50 miles per gallon by 2025.

Next-generation full-size pickup trucks from Ford and General Motors will have to balance towing and hauling capability with unprecedented frugality to meet the tough new Corporate Average Fuel Economy standards.

That has some folks worrying it may be too much of a challenge to pull off, at least not without sacrificing the functionality American truck buyers expect.  But don’t plan on holding onto your big rig ad infinitum.  As we’ve begun seeing with such innovations as the turbo-powered EcoBoost V6 on the 2011 Ford F-150, there are some promising ways to reach mileage never seen before.

Here’s the latest information from our insider sources about the engines that will help Ford and GM, in particular, accomplish this feat.

Ford is said to be working on two all-new six-cylinder engines under a program codenamed “Nano.”

The Nano mills are expected to continue Ford’s efforts to shrink engine displacement while using turbocharging to boost power levels and return superior mileage. They are said to have displacements of approximately 2.6 or 2.7 liters and 3.0 liters and are expected to find their way into the next-gen Mustang as well as the F-150. Other Ford vehicles are likely to host these engines, as well.

The 3.0-liter V-6 is said to have a power target of approximately 300 to 315 horsepower, almost the same as today’s entry-level naturally aspirated 305-hp, 3.7-liter V-6. Instead of twin turbos, the Nano engines are expected to use so-called dual-stage turbocharging, where two different-sized turbos work independently or in tandem. One turbo is used at low speeds for drivability and fuel economy, while the second turbo spools up at high speeds to deliver extra power.

GM is expected to offer four significantly updated or new gasoline engines for the 2014 Chevrolet Silverado and GMC Sierra, in addition to the workhorse 6.6-liter Duramax diesel V-8. All of the new gas engines will feature direct injection.

Heavy-duty trucks are said to receive an exclusive 6.2-liter V-8. Currently, a 6.2-liter V-8 is only available for the 2007-12 Silverado and Sierra 1500 half-tons. Light- and heavy-duty models would share a 6.0-liter V-8 that’s currently only available for 2007-2012 Silverado and Sierra HD pickups. In early planning for both large displacement V-8s, supercharging was considered as an option (similar to the 2009 Chevrolet Silverado ZR2 concept truck) for maximum power while maintaining fuel efficiency. However, supercharging has been dropped from consideration for now.

GM’s next-gen half-tons are also expected to continue offering a V-8 with 5.3 liters of displacement and a turbocharged six-cylinder engine that can compete head-to-head with Ford’s 3.5-liter EcoBoost V-6. Six-speed transmissions are expected to be the standard gearbox for all engines.

Don’t think Ford and GM are alone in racing to find high-mileage solutions.  We expect to see some intriguing technology emerge from Chrysler’s Ram brand, possibly taking advantage of some technology derived by its European partner Fiat.

As for the imports?  Toyota’s Bob Carter confirms to TheDetroitBureau.com that, “We’re in the truck business to stay,” with a next-generation Tundra absolutely in the cards.  And considering Toyota’s focus on fuel economy that could mean some interesting solutions.

Nissan’s product czar Larry Dominique advises that a next-gen Titan is also in development.  Powertrain?  To be determined.  Dominique notes that “We’ve been able to achieve a lot better mileage than anyone thought possible just a decade ago,” thanks to such breakthroughs as direct injection, twin-turbocharging, six, seven and eight-speed gearboxes and other once unforeseen technology.

He admits he’s nervous about finding what it will take to reach the 2025 truck target of 54.5 mpg, as are Nissan’s competitors, but it’s clear that with so much riding on the results the changes we’ve outlined here will likely be just the beginning.

TheDetroitBureau.’s Paul A. Eisenstein contributed to this report.

You can find more of  Mike Levine’s work on his own site, PickupTrucks.com.