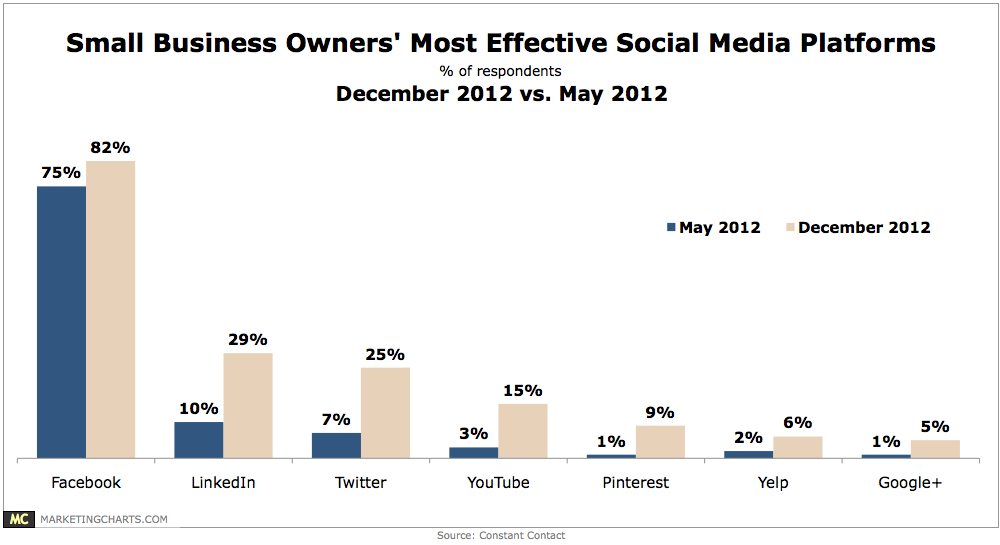 The results appear to be in direct contrast to earlier survey findings from the Wall Street Journal (WSJ) and Vistage International, in which LinkedIn emerged as not only the most commonly used social media tool by small businesses, but also the most positively perceived.

Both studies found evidence that car dealerships and other businesses could be doing more with their social media marketing. The WSJ survey turned up fairly low rates of regular usage of social media, and the Constant Contact study finds that just one-quarter of respondents post to Facebook daily, with that figure falling to 13% on Twitter and less than 5% for the other platforms identified. The numbers aren’t much better when expanding to weekly postings: 32% report posting with that regularity on Facebook, 18% on Twitter, and no more than 10% on any other platform. So while many small business owners are using these platforms, they’re not terribly active on them.

A little help might spur them on, though. Asked which marketing activities they need help with, a majority cited social media marketing, the most of any activity identified. Next up, email marketing, following by websites, online advertising, and online listings.

About the Data: This Constant Contact-sponsored survey was administered in December 2012 to 1,100 participants in the Constant Contact Small Biz Council, a research panel of US small businesses and nonprofits recruited from the Constant Contact customer base. This is the third installment of an ongoing study about the state of small businesses and the ways they connect with and grow their audiences. Results include responses from respondents across a range of business-to-business and business-to-consumer industries. 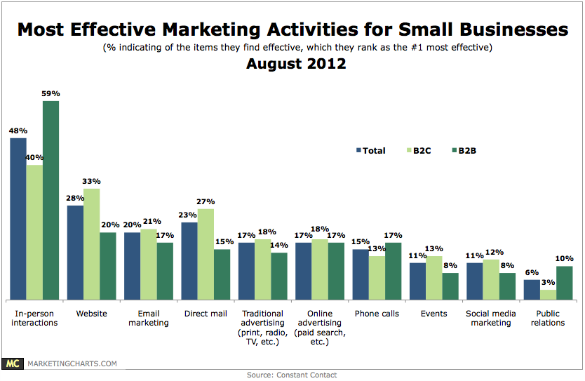 The consumer-focused B2C market may feel more personal (with its ads for diapers and personal banking), but B2B companies with their trained salespeople and long-tail sales cycles are far more reliant upon in-person marketing. To put this into perspective, B2B small businesses were roughly three times more likely to say that in-person interactions were their most effective marketing activity as to say the same about second-place websites (59% vs. 20%). The largest proportion of B2C small businesses also rated in-person interactions as most important, but at 40% of respondents, the gap was far narrower with websites (33%) than for B2B respondents. 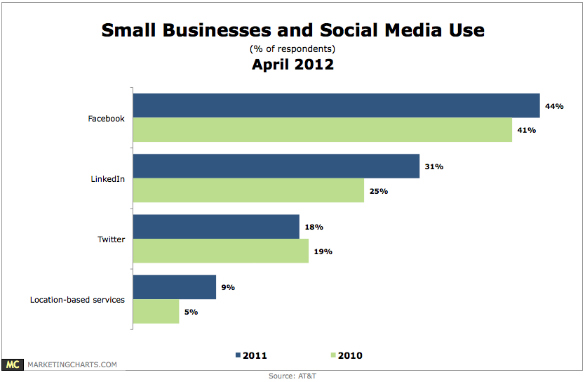 Still, digital tactics are more buzzworthy, and perhaps less labor intensive and costly. However effective is in-person interaction, the most popular marketing tactics used by B2B companies (not just small businesses) are digital, found Sagefrog Marketing Group in a July survey. When asked which of 16 common marketing tactics they use, 94% of B2B marketers pointed to websites, followed by email (76%), social media (68%), and SEO (58%). In-person methods rated far lower, including seminars (44%) and telemarketing (just 17%). But, marketers rated referrals their top source of sales leads.

In the Constant Contact survey, small business respondents (B2B and B2C) were more likely to say that in-person interactions were their most effective activity than to say the same about email marketing (20%), traditional advertising (17%), online advertising (17%), events (11%), and social media marketing (11%).

Lowest in both areas were online surveys and polls, rated as effective by just 5% of B2B and 4% of B2C respondents.

Interestingly, despite getting high ratings for effectiveness, 40% of small businesses are looking for help with email marketing, and 30% with their websites. While only few need help with more established marketing activities such as direct mail (11%), in-person interactions (9%), and traditional advertising (9%), many believe they need some assistance with their social media marketing, at 59% of respondents overall (66% of B2C companies, and 47% of B2B companies).

This aligns with a separate survey released in August by Constant Contact UK, which found British small businesses to be confused about their Facebook marketing.

According to the Constant Contact US survey, while LinkedIn and Google+ may appear more “business-like,” among both B2B and B2C marketers who ranked social media as one of their top 3 effective activities, Facebook was overwhelmingly favored as their most effective tool. Three-quarters of these businesses overall rated Facebook their most effective social media channel, including 83% of B2C and 55% of B2B companies. B2C ranked Twitter second (just 6%), while B2B ranked LinkedIn second (25%) in effectiveness.

For all the noise about video, YouTube was a mixed bag. Just 3% of this group of respondents ranked it their most effective social media channel, with B2B respondents more approving than B2C (6% vs. 2%).

Personally I think a lot of Dealers are in the Dark (Or just too lazy) to see the significant value the various Social Media Channels. YouTube, LinkedIn, Facebook etc. Throw your stuff out there on the `Net! "You`ll never know if the fishin` is good or bad if you don`t throw your bait in the water!" - And the best part..... A lot of what is available nowadays is FREE or will have a minimal cost against the ROI! You don`t need any Vendors to tell you this Boys & Girls........ you just need to jump in & DO IT! The water is warm! C`mon in!

Depends on how it's being used and the strategy. Also, I see small companies, not car dealers specifically in those articles. Is there SPECIFIC automotive retail data to support this claim? Anyone who takes their Facebook page more importantly than their website need to have their head examined. It's a satellite only. I'm not worried about the popularity of Google+, I use it as a publishing tool for SEO purposes. If info is shared or +1'd there, great!

This is a great article. I have come across several dealers recently that are still not comfortable in the social media arena and definetley not aware of all the features and functions on the various platforms. I agree with Brian that setting up some ADM webinars to cover each platform would be a great idea!

Ralph, great data that reminds me that multi-channel marketing and branding is now the basic expectation of consumers.  They expect to find the brand(s) they choose to be engaged in social media channels.

YouTube is commonly used by dealers, but still I find that dealer's are not leveraging the video pre-roll capabilities that YouTube offers.

I think that all sales professionals should have a LinkedIn account and receive training on how to leverage LinkedIn to maximize their client base for referrals.   I find LinkedIn email delivery rates very strong, if done properly.

Facebook has added new tools for dealers, including retargeting, which again is very fresh and new to most dealers.  I encourage readers to see how promoted stories and retargeting can work for their local branding.

My takeaway from this data is that dealers must have a consistent message across all platforms that consumers choose to frequent, and that is still not a standard practice in our industry.  With so many vendors in the mix, it is normal to have multiple messages and strategies that can often conflict and waste money.

Ralph, it could be time to schedule a series of ADM webinars that take each platform, one at a time, to cover how dealers can maximize their reach on each platform.