NEW YORK HONDA DEALER DOMINATES CASH FOR CLUNKERS MARKETING BY GETTING OUT IN FRONT OF OTHER DEALERS WITH EARLY CAMPAIGN EXECUTION!

Paragon Honda and Acura of Queens, NY had already collected over 1,000 leads before President Obama signed the “Cash for Clunkers” bill into law, and they have continued to collect thousands more through their targeted marketing strategy. “These customers have a $4,500 advantage, so they are a great customer to target,” said Paragon GM and Vice President Brian Benstock. “While other dealers were waiting for July 23, we had already contacted all the qualified consumers in our market.”

As is widely known by now, the federal government has allocated $1,000,000,000 to provide consumers $3,500 or $4,500 vouchers towards the purchase of a new, more energy-effi cient vehicle. The program is authorized by congress and President Obama be applied to sales of new vehicles between July 1 and Nov. 1, 2009... HOWEVER, the program ends if the funds run out, whichever comes first. This is a classic case of the old cliche' "The Early Bird Gets The Worm"! The best dealers took my advice and launched their advertising campaigns early, which is why the early adopters, like Paragon Honda, will get the lion's share of the market... Because they were bold enough to take action while others dealers sat on their asses and worried about the administrative details that NHTSA would issue, but by law, would be constructed per the LAW that was already in effect... Doh!

If there were more dealers like Paragon, the funds would already be gone! And THOSE DEALERS would be a billion dollars ahead of the deadbeats who waited and fretted their head start opportunity away...

As it is, I know there have been enough dealers who jumped all over this opportunity of a lifetime early enough, using ADP Digital Advertising and suppliers such as Sean Wolfington's new venture, that the program will most definitely run out before the November 1, 2009 deadline. Because of the aggressive marketing campaigns aimed at getting more than their fair share of the $1 billion in rebate money, these are the dealers who will have a good year.

The official name of the bill as passed by congress back in June is the "Consumer Assistance to Recycle and Save Program" (C.A.R.S.). Interestingly enough, NHTSA calls their administrative program by the same acronym, but decided to use a different name; "Consumer Auto Rebate System"... Confused yet? GREAT dealers never let confusion stop them from going after a sales opportunity... Paragon Honda, Thorobred Chevrolet, Courtesy Chevrolet, Jersey City Ford, Rich Ford... and at least 200 other early to the market dealers, they are the dealers who have already sold so many cars using Cash For Clunkers Internet marketing and advertising, that they are taking all the money that the other dealers, the ones who waited too long, who sat on their collective, conservative, scared dumb asses, will get shut out in short order. When you all get your deals turned down because the smart dealers already took your deal money, just remember what Ralph published in June... YOUR Congress and YOUR President passed a FEDERAL LAW authorizing payment to dealers for every qualified new vehicle sale starting on JULY 1, 2009!

You can visit www.ConsumerAssistanceToRecycleAndSave.org to view the original legislation and a summary of the rules. Sure, the dealer payout program was to be implemented by the NHTSA, within 30 days of the June 23, 2009 date the bill was passed and signed into law. And yes, the NHTSA did not post the payment process details until July 27, 2009 (late)... BUT THE LAW AUTHORIZED PAYMENTS RETROACTIVE TO NEW CARS SOLD STARTING ON JULY 1, 2009... Is it any wonder that all the money will be gone before the "Homer Simpson" dealers started to wake up?

Other than the legislation that President Obama signed, the NHTSA's www.cars.gov, is the only official government Web site. The dealerships reaching these consumers first have not only taken advantage of the dramatic increase in demand that this bill created, they also built a large local database for marketing, and that is exactly what Paragon and all the other "Marketing Savvy" dealers did.

National and Regional Strategy
Paragon positioned themselves as the go-to resource for “cash for clunkers” information in their market. Their Web site, www.CashForClunkersNY.com, is an information portal that helps consumers learn about the program and connects them with the dealership to get pricing information. The Web site was built for free by their national “cash for clunkers” network partner, www.CashForClunkersInformation.org, a consumer information site that educates consumers and helps them find licensed dealers in their markets. This is similar to Brian Pasch's www.CashForClunker-Facts.com, and just goes to show that great ideas often sprout up in different places simultaneously.

By partnering with www.CashForClunkersInformation.org, Paragon receives all the national leads from the site, and has benefited from their three celebrity spokespeople (Mexican actress, singer and comedienne Angelica Vale, “Dancing with the Stars” actor Cristian de la Fuente and former Chief of the U.S. Office of Citizenship Alfonso Aguilar), who have promoted the organization on the biggest news outlets in English and Spanish. While Paragon does not get all the leads from the national site, they get the leads for their particular market. In addition, Paragon has licensed the entire marketing campaign to promote the program to qualified consumers through targeted mail to the clunker list, search marketing, e-mail marketing, banner ads, print, PR, radio, point of sale merchandising and, of course, the aforementioned Web sites. 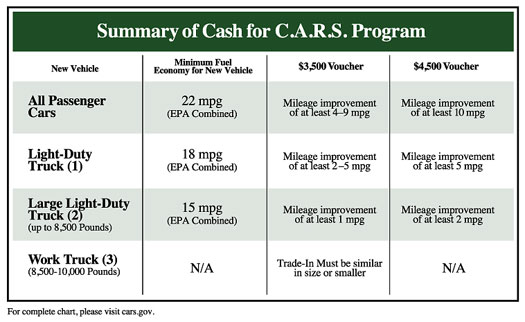 Paragon’s Targeted Marketing Plan
On average, approximately 10 to 15 percent of a particular market qualifies for the program. Paragon used www.ClunkerList.com, a list of the top-200 markets that
shows the numbers of vehicles that qualify for the program, along with another sublist that shows customers who qualify for the program and have a higher probability of qualifying for financing. Paragon implemented a targeted campaign to all the clunker prospects in their market before their competitors because they launched the campaign before the NHTSA published the final rules... They caught their competition asleep at the wheel... Or, whimpering in the corner, whining about wanting to see what the NHTSA would publish. Let this be a lesson to all you willie nillies who sat on your dumb asses while other dealers ate your lunch, the CONGRESS and the PRESIDENT create and authorize the laws in this county, bureaucrats like the NHTSA push paper around and send out checks. Sure, they will screw that part up and everybody will be waiting for their money for awhile, but how is that different than getting strung out by GM for 3 months waiting for your contest and incentive payments?

Web Marketing
To inform everyone who visits their dealership Web site, Paragon added the “Cash for Clunkers” logo on their home
page, which leads consumers to www.CashForClunkersNY.com. Paragon appears first for people searching “Cash for Clunkers
NY” or "NY Cash for Clunkers" - You can click on the links shown to test both of these search phrases for yourself with Google.

Finally, they sent an e-mail campaign to their customer base to inform them of the program and to remind consumers who don’t qualify for the government’s program that they can qualify for the manufacturer and dealer incentive programs.

Publicity
If you click the following Google search link: www.CashForClunkersNY.com you will see some of the press Paragon and their Web site has received in the last few weeks. The national site, www.CashForClunkersInformation.org, generated all of the local press, and positioned Benstock as the subject-matter expert with the local media. As a result, he did both national and local TV (NY1), radio, print and online interviews. As a result of the publicity, consumers who are learning about the CARS program for the first time are only one click away from their information portal, which sends leads directly to their dealership.

Traditional Advertising
Paragon used a half-page print ad and limited radio. All of the ads had the same credible message that positioned Paragon and its consumer portal as the “cash for clunkers” resource for information. Paragon’s radio ads are short news updates that inform customers about the government rebate program and drive them to www.CashForClunkersNY.com for more information. After consumers learn about the program, dealers will have to highlight the incremental incentives offer above and beyond the $4,500 rebates.

Dedicated Team and Process
The above average response rates have generated call volume that is beyond Paragon’s BDC capacity, so all of Paragon’s incoming Cash for Clunkers phone calls are being directed to the campaign call center. The call center schedules the appointments and sends a confirmation e-mail with instructions and directions. The dealership then confirms the appointment and sells the car. Followup on no-shows and unsold prospects is done by Paragon's BDC and sales staff.

Vehicle Disposal and Receivables
Paragon has set up processes that start on the initial call to get the required documentation necessary to receive their funding from the government. To get the funding within 10 days of the application, dealers must prove the vehicle was operable, has been owned, registered and insured in the buyer’s name for a minimum of one year, and was salvaged according to program guidelines that were published on July 27, 2009 on www.Cars.gov, but which was clearly stated in the lay that President Obama signed on June 23, 2009.

Getting Ahead of the Demand Wave
This thoughtful marketing campaign has given Paragon a head start in the New York area. Paragon’s early success at marketing themselves ahead of the demand wave caused by Cash For Clunkers publicity has already helped them sell more than 100 new vehicles to Cash For Clunkers eligible car buyers. Hopefully, this article will help other dealers to jump into action while there's still a few bucks left behind by Paragon and the other dealers who used early Cash For Clunkers marketing campaigns to get ahead of the demand wave and surf to success instead of getting beat up in the market. If you haven't jumped all over this opportunity yet, then you need to find a prepackaged, ready to launch advertising campaign from a marketing services supplier, such as Sean Wolfington's program, or at least the online component from ADP Digital Advertising. Regardless, if you don't want to lose out to your competition, you need to create a winning strategy that maximizes this historic opportunity in your market. 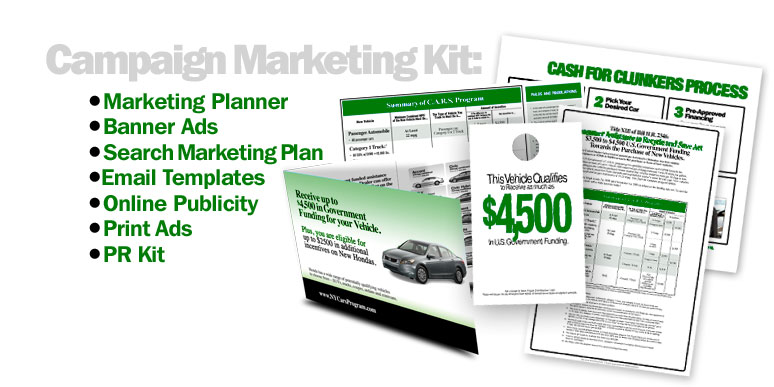