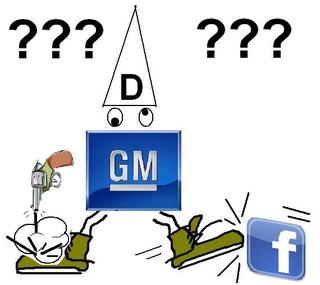 There's a great article here called Doing It Wrong: 11 Boring Things GM Posted on Facebook.   I couldn't agree more with the article.  And, like the article itself, I have more to say than just comment on the "boring" Facebook page operation by GM, as well:  GM is stupid, or "dot dumb", for revoking their paid Facebook ads.

What is going on?  This is really "Old Media vs. New Media" and nothing new for GM's advertising, unfortunately.  I don't agree with the folks who claim Facebook cannot be monetized well--in fact, if I were running GM's online efforts, I would have wanted to WORK WITH Facebook to tune up their ad system!  The press from such an effort would have been very big.  And positive, even if the project itself didn't work (which I think it would).  We will sell 14 million vehicles this year, give or take, and spend (between the OEMs and dealers) $14 billion dollars in advertising!  That's $1,000 a vehicle.  And that's a lot of money to direct to the right places.

And yet Facebook--with a standing audience of many millions that includes both domestic GM customers and possible conquests (not to mention SERVICE customers)--is somehow not, in GM's eyes, worth working it out?  Evidently.  Well, whether you believe Facebook is the Next Online Ad Giant or you don't, GM's move to revoke $10 million of Facebook advertising (very important, though a drop in the bucket for both OEM car ads as well as Facebook income) is indicative of a systemic problem:  GM has never, ever really "gotten" the Internet.  From their matching funds efforts for digital ad strategies to their lead programs, they don't understand what it takes to really advertise vehicles much less sell vehicles leveraging the Internet.  And this was true before the bankruptcy and is true after.

Phrases like "Emperor's New Clothes" and "Calling Their Baby Ugly" come to mind, as clearly GM has an entrenched mindset that has continued to not "get" the Internet OR social media for years--and so I don't expect either to make a change at GM or make a friend from this article (and I do have friends who work at GM, by the way, and for the record as individuals they are very smart).  I'm just one guy who DOES get it writing a blog in an online community.

Which is sad.  I'm a long-time GM vehicle buyer, by the way.  A true fan of the product.  Unfortunately, there are fewer and fewer of us:  Most of the "unaffiliated" vehicle buyers are on Facebook.  And they're under 35.  And maybe under 40.

And, as the most-marketed-to age group in history, they are not stupid.  They are "dot smart".

Maybe GM Marketing/Advertising should hire a few of them.

Eh.  GM is not getting out of Facebook.  Just the paid side.  Regardless, in my opinion, they're just making the same type of mistake they've made on the Internet for the last decade.  Their prerogative or not, to me it's still dumb.

It's like this:  14 million units.  Who will get what piece?  That competition begins with advertising.

Comment by Jason Manning on May 20, 2012 at 8:25pm
I think some assume that GM is getting out of Facebook.  That doesn't seem to be the case.  They just changed their advertising strategy.  That is their prerogative.  Manufacturers using different strategies makes a market work.  Their vehicles sell well now.
@Ed, "captive" is hours of videos being passed from smart phone to smart phone.  It's difficult to pass around hours of ads, on Facebook...

Jason, Subscriber and Fan counts are perhaps the least effective way to measure Social. Going back to Facebook for a moment Cadillac has almost 1.2 million fans while Audi has over 5.2 million. The better metric is "people talking about this"; Cadillac has almost 13K while Audi has over 117K. Social is about engagement, not broadcasting. GM is good at broadcasting, but poor at engagement.

Broadcasting is not social. I have no idea what you mean when you say 'captive'. GM is failing at social.

Keith, I saw your comments under the AdAge article, "Doing It Wrong: 11 Boring Things GM Posted on Facebook" by B.L. Ochman.  You wrote, "Thinking that 'Everything GM' is right on Facebook is as bad as being a salesperson at a party and dropping your business card into everybody's drink!"  I agree.

But I think the timing of their announcement speaks for itself, on the eve of Facebook's IPO.  There's more to this  "than a desire to sell more Chevys, Buicks, Cadillacs and GM trucks", as Ralph said.

That is social.  That is captive.  GM gets it.

Keith, like many things at GM, I suspect the decision to cancel Facebook Advertising AND make a public spectacle around that decision was driven more by politics than a desire to sell more Chevys, Buicks, Cadillacs and GM trucks.  GM has remained the victim of its own political cancer since long before the Federal Government bailout, and because they were not FORCED to heal themselves like Ford was, that political cancer will emerge from remission and consume the company yet again.  Read Bob Lutz's book "Car Guys Versus Bean Counters" and you will learn about how the combination of bureaucracy and politics hampered GM over the last ten years.

@ Ed, the Tier 1 Awareness belongs on YouTube (mobile especially) and Television.  That is where "Buy a Chevy" works well, to your point.  Facebook is for dealers and Tier 3 PPC.  "Social" encompasses much more than Facebook.  As for GM making their move, I think it was appropriate.  Facebook advertising is great for Tier 3.  It always has been.  GM definitely get's it and I think you categorized it, perfectly, by mentioning the Tiers of marketing.  That really puts Facebook marketing into perspective and GM (or any manufacturer) can hardly handle engaging anyone on Facebook (too many contacts to respond to).  Broadcasting is the manufacturer's role.  Television and YouTube.

@ Ed:  Exactly.  When everybody else gets it, and many of them are getting market share and profits from the Internet that you are NOT, then you (GM, in this case) need to wake up.  GM has been "dot dumb" for a long, long time.  IF they end up being right on this decision, which I don't think they will be, it will be the "broken clock is right twice a day" scenario.