Lead-generating Facebook Content?
More and more Dealers find themselves struggling to produce compelling Facebook content. Even more are struggling to generate a Return on Investment. Some have even given up trying. (Social is about community, not sales, right?) Elder Ford of Tampa (http://www.facebook.com/elderfordoftampa) isn’t one of those Dealers. This is their story. 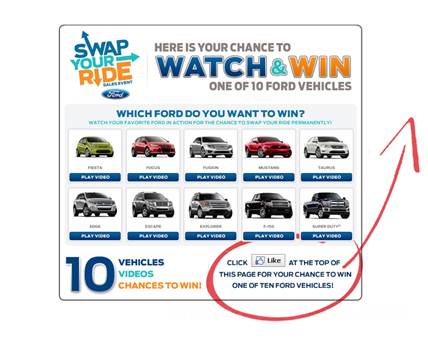 An Innovative Dealership, An Innovative Marketer
Meet Terald Hopkins, General Manager of Elder Ford of Tampa. He’s an avid and aggressive marketer. Innovating such ideas as “Home of the $5,000 Test Drive”, Mr. Hopkins is always on the look-out for marketing ideas that can give his store a unique edge in the marketplace—offline and online. So, it was no surprise that he found what he was looking for in “2012 The Swap Your Ride Social Media Opportunity”, presented to him by Ford only a few short weeks before the Sales Event began.

No Assembly Required:
The Ford-funded Social Media Promotion had three parts: 1) A Vehicle Giveaway (always a draw for Facebook fans), 2) A Website and Facebook application installed on the participating Dealer’s Facebook page and 3) all the online creative elements required to market the promotion (email templates, Facebook ads, Facebook Sweeps application, website banners, messaging and more). To make it even more attractive and easier to execute, Ford tapped a proven, 12-year Ford Vendor, Flash Point Communications (http://www.flashpointcommunications.com) to handle the execution. It was completely “turnkey” for the Dealer.

“I am extremely happy with the results of the Facebook program. We doubled the amount of people on our page and it gave us great name recognition. Amberly with Flash Point was fantastic to deal with and help us make sure it ran smoothly. We have already gained over 360 Facebook Fans and 85 Leads!”
-- Elder Ford of Tampa

Surge in Fans, Interactions & Leads Impresses Dealers
Results on Facebook were almost immediate. An early surge in Fans, interactions and leads encouraged Mr. Hopkins to issue a Press Release to local radio stations and brief his Sales Staff to talk it up on the showroom floor. Fans and leads continued to come in. Final results? 464 new Facebook fans (more than double from where he started), 207 sweeps registrations, 97 “opt-ins” (requesting more information) and 4 new vehicle sales (within the first 30 days of program conclusion). Leads are still being worked and a final “sales match” will be performed on 8/31/12. Other participating Dealers were equally pleased.


"Gained over 300 Facebook fans and 79 leads and the program isn't even done yet! Flash Point made the program turn-key and painless. Can't wait for future programs! Thank you Ford and FP!“
-- OC Welch III

Our participation in the Swap Your Ride Promotion with Flash Point Communications was a great choice for us. To date we have gained 299 Face Book Fans and generated 108 leads. The entire team at Flashpoint has been attentive to our needs and everyone has followed through on all of their commitments. Great program and great results.
-- Walker Ford

Flash Point has done an incredible job with organizing and facilitating this promotion. We have gained nearly 200 Facebook followers and 60 leads in just 7 weeks!
-- Northland Ford


A Lucky Strike Extra
Out of the 64,000+ “Swap Your Ride Sweepstakes” registrations generated nationwide, as fate would have it, a winner was chosen in Elder Ford’s back-yard. The winner, taking delivery of his new F150 at Elder, offered yet another marketing opportunity that Mr. Hopkins capitalized on with local media, PR, photos, video and an in-store event. In the end, Elder Ford had accomplished what they set out to do: grow their Facebook fan base, create extra excitement in their online and offline community and give their Facebook fans something extra to come back for. 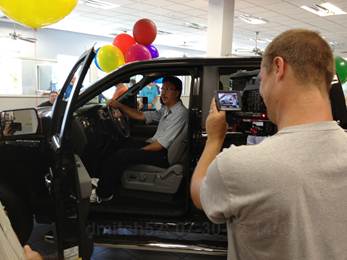 How to Get Information or Enroll in Future Sponsored Promotions:
To learn more about upcoming opportunities that may be available for your Dealership, call or write Scott Empringham at Flash Point Communications.
Phone: 949-315-5585
Email: scott@fpcdigital.com
Website: http://www.fpcdigital.com
Facebook Page: http://www.facebook.com/flashpointcommunications

Been traveling, otherwise I would have jumped in more quickly.

Rob, I think you're right on the money.  Love the suggestion about utilizing "promote".  Amberly and I talked, we're going to start building that into our campaigns.  One of them many reasons I love communities like this.

Dave - I think you're spot on, as well.  One of our top priorities for our Dealer partners is to post the most engaging content as possible -- while still touting the benefits of their particular store or vehicle.  Kitty cat photo caption contests are out.  Thoughtfull, engaging content is much more challenging -- but valuable to the clients we serve.  That's what we strive for.  If/when we can encourage positive feedback about that Dealer or vehicle, we feel like we're doing our job.  When we can trigger leads (from fans), we feel even better.

Love the comments, both negative and positive -- as it keeps us honest and on our toes.

Ralph, thank you for creating this one-of-a-kind community!

Thanks for this article! I get approached multiple times by different Ford Social promotion opportunities and I'm usually hesitant to attempt them....GREAT information! Thank you! And way to go Elder Ford!

Comment by Rob Hagen on August 9, 2012 at 6:22am
Aaron, social media is not a direct sales tool, it is a relationship building tool in the category of branding. Does your dealership have billboards? How about a landscape company? How many cars do these sell? Hard to say but Both affect people's perception of your dealership.

One thing I would stress to dealers is not to lose sight of engaging these new likes. A large number of people will like your page but wont see your posts because they have not engaged you. Get people talking on your page and they will come back routinely and see your posts.

A nice new tool that Facebook has come up with for this is the "promote" button. For a small amount of money, you can ensure a larger number of people will see your individual post. For example, we have one client that does a great job of getting Dealerrater reviews. Every review they get, we share it on Facebook and promote it. Before we started this, these posts would average being seen by about 500 of their 2800 likes. Now for $10 per promoted post, these reviews will be seen by 1500 to 1800 people plus are starting to be seen virally as more people are liking the posts.

When we bought our first car, we asked Dad, our Uncle, or whoever we trusted for their opinion and experiences.  Now days, you post it on Facebook and all your friends can easily give you their opinion of the vehicle AND the dealer.  Watch your reputation closely.  You might be surprised how "laying them away" will catch up to you.

George and Dave - Thank you for chiming in here! Plus, it is always good to see two professionals like you guys contribute to improving our craft.  I have been exposed to Flash Point's work and Scott E. has become a friend over the past several years.  They are a high integrity, very competent organization that executes their social media marketing campaigns with excellence.

We have worked with Flash Point on both the Swap Your Ride campaign and a previous facebook campaign.  We have had fantastic success with them. our results were easily double what we had expected, and were as good or better than the ones that are quoted for Elder Ford above.  Amberly could pull those up very quickly I am sure.  The biggest selling point for us was the sales, 12 trackable sales from the first campaign, in the first 60 days.  They have been a great asset for our Social Media presence and I look forward to working with them in the future.

We are currently using Flashpoints Virtual Backyard BBQ for a free 2 year lease and running a local promotion for $25 BBQ gift certificates and an entry for a dream $3500 custom BBQ Island built on site.  It's working great.  We will pass 1,000 Likes soon and the showroom has been busy!  And yes, the leads from the people who "Liked" us and checked the in-market box have been sent to the CRM and have tracked several purchases.

Aaron, like I posted on your previous comment, it is great that you have an opinion, and are willing to post that opinion, we appreciate your participation... However, it is really easy to make sure something does not work, and I am sure you good at making sure social media does not work where ever you are at, but for many dealers, managers, sales professionals and marketers in the car business, there are a variety of ways that are being used to make use of social media to sell more cars.  I have personally made many car sales to people who connected with me via social media, and there have been almost no dealerships of the dozens I have visted in 2012 that are not selling some cars via their use of social media... All the research and tracking systems show that dealers who use social media effectively sell more cars. So, my question to you is why do you believe social media cannot be effective in connecting car dealers with more customers? Do you not want people saying good things about your business? Do you not believe that customers trust what other customers have to say about your dealership? So, the hundreds of millions of car buying consumers watching videos about the cars you sell on YouTube are not worth communicating with? So, Google search engine results have nothing to do with selling more or less vehicles at your dealership?  All of these questions are dead center about social media marketing... Wake up and smell the roses, social media has been here for thousands of years and new technology has accelerated it to the level of becoming the single most powerful marketing force on the planet.