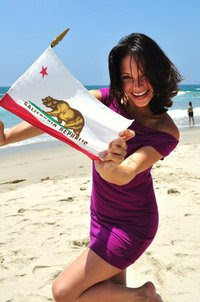 Flash Point Communications, a digital media marketing agency based in Newport Beach, CA, is excited to announce the next in their lineup of ground-breaking social media campaigns – the Best of California Road Trip, in association with the California Lincoln Dealers.

The California Lincoln Dealers handed Flash Point a 2011 Lincoln MKX, tasking them with the challenge of building awareness and interest in the technologically advanced luxury cross-over SUV through an innovative, cutting-edge social media campaign. Flash Point delivered on the client’s asks and then some, responding with a turn-key solution that highlights the vehicle’s features in an aspirational yet approachable manner, communicated through a comprehensive social media platform to a broad range of audience members – both Lincoln enthusiasts and those sharing an interest in the great state of California.

The Best of California campaign follows actress / model Vane Millon on a roadtrip across California in a 2011 Lincoln MKX, documenting Millon’s various destinations as well as demonstrating key features of the MKX which would appeal to the consumer. Millon (accompanied and documented by Flash Point’s CEO/President Scott Empringham) are posting a series of videos over the course of the roadtrip, showcasing the 2011 Lincoln MKX in the context of “The Best of California” – sharing with the audience the vehicle’s features as they explore the many exciting sites, points of interest and local businesses in the Golden State.

Not only can viewers follow Millon’s movements through postings on the official Best of California blog, Best of California Group Page, Facebook page, YouTube videos, and Twitter posts, but they can also join in the fun during her roadtrip by participating in events where Millon makes live appearances throughout her journey. These public events at each key destination will take place at local retail businesses, providing opportunities for hands-on audience experiences, bringing attention to local culture and driving customers to benefit local economies. In addition, audiences can vote for their favorite participating retail business through the California Lincoln Facebook fan page, as they compete for the title of “Best of California Business.” The winner will be announced at the campaign’s final destination in San Diego.

Event postings will be highlighted on the blog and through other social media outlets, ultimately leading the audience to the California Lincoln Website where viewers will be able experience a set of "2011 Lincoln MKX California-style Virtual Tours and Test Drives"--just as if they were on the road trip with her.

Millon kicked off her roadtrip on September 27 in Sacramento, and will make her way through San Francisco, Monterey, Los Angeles, Palm Springs, Orange County, to her final destination of San Diego in mid-October.

About Flash Point Communications
For over ten years, Flash Point Communications has been recognized as a leading innovator in the digital media marketplace. With an emphasis on social media and specialization in automotive advertising groups, the firm has established itself as an industry specialist serving the globe’s most respected automotive brands including Ford, GM, Chrysler, Toyota, Honda, Nissan and Land Rover. Based in Newport Beach, California, Flash Point’s twenty-five employees service clients from four offices nationwide. For more information, please visit http://www.flashpointcommunications.com/.