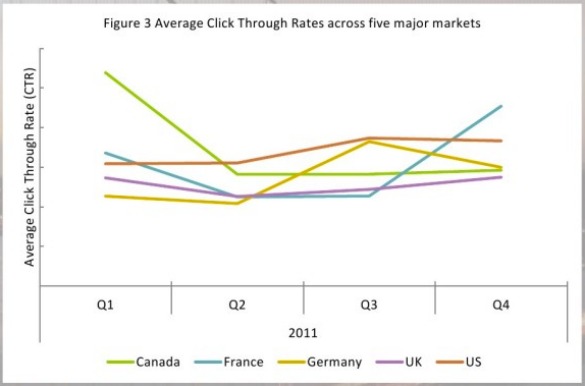 Click through rates (CTR) on Facebook ads increased by 18% from Q1 to Q4 2011 among the 5 major markets (Canada, France, Germany, UK, and the US) measured by TBG Digital, according to the company’s Q4 2011 report, released in January 2012. CTR increased by an average of 7% between Q3 and Q4 2011, bolstered by France (100% increase), but offset by Germany (18% decrease) and the US (2% decrease). In fact, France overtook all other markets in ad performance in Q4, with the US, Germany, Canada, and the UK following.

Cost per thousand impressions (CPM) rates also increased by an average of 8% between Q3 and Q4 2011 in the 5 markets analyzed, meaning that Facebook saw an increase in how much they earned per impression served in each quarter of 2011. Overall, there was an increase of 23% in CPM rates between Q1 and Q4 2011, with the US experiencing the highest rates, ahead of Canada and the UK.

CPC Rises in US

Data from TBG’s “Global Facebook Advertising Report” indicates that the average Facebook ad cost per click (CPC) experienced an increase of only 1% between Q3 and Q4 2011 in the major markets, although the US saw an increase of 10%. According to TBG insight, this could point to demand increasing as more brands are advertising on Facebook and supply plateauing as US user growth slows. By contrast, the UK’s 11% decrease in CPC could indicate there is still further opportunity in that market. 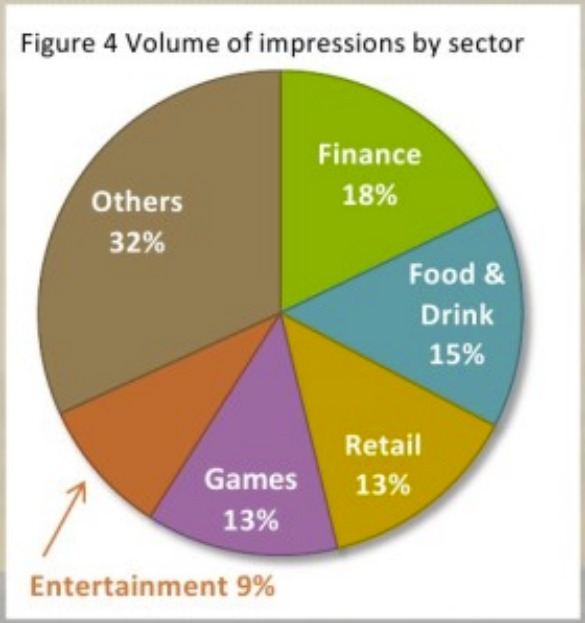 The top 5 sectors of the 18 measured accounted for more than two-thirds of the total impressions served in Q4 2011, led by finance (18%), which grew 50% from its 12% share in Q3. Food and drink (15%) held the second-largest share, while games and retail both commanded 13%, with entertainment (9%) following. The internet and telecom category saw an 21% rise in impressions served between Q3 and Q4, leaving it just outside the top 5.

Food and drink took the top spot among sectors in terms of CTR, with beauty and fitness and retail not far behind. Home and garden and the not for profit sectors both entered the top 5 for the first time.