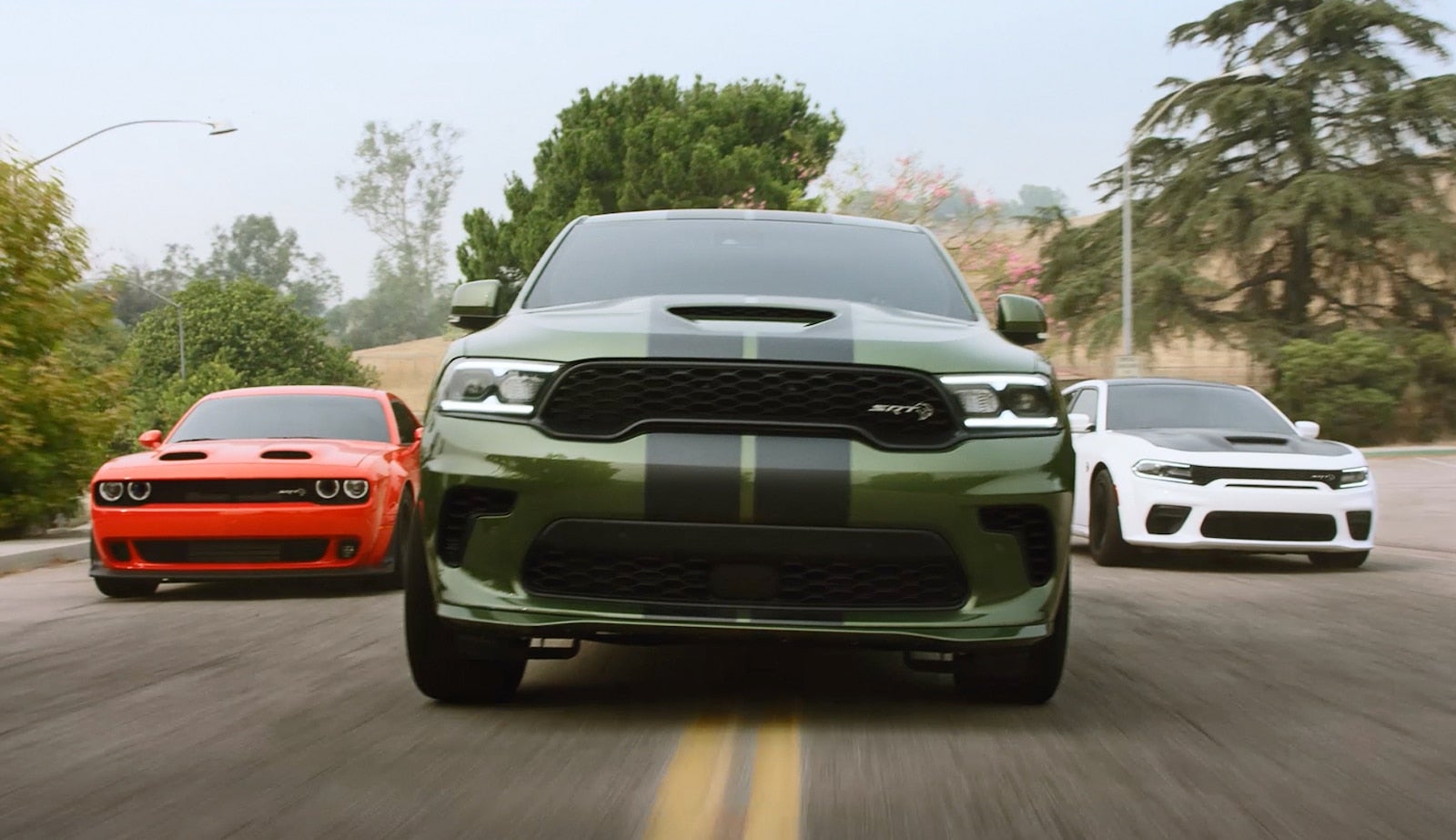 Dodge Drives Up the Numbers:
Three Model Lines Nudge Up to and Surpass 800 HP

Challenger, Charger and Durango all muscle up for the new model year...

Dodge has “doubled down” on performance for the 2021 model year, suggests brand boss Ashton Munoz, all three of its model lines now offered with Hellcat powertrains that approach or top 800 horsepower. In recent years, Dodge has been narrowing its focus, eliminating mainstream products like the Caravan minivan and Dart sedan to focus exclusively on performance products. That includes the familiar Charger sedan and Challenger coupe, as well as the latest version of the Durango SUV.

These products “are not just transportation. They’re an extension of who our customers are,” said Munoz during a socially distanced media briefing on Wednesday afternoon.

Dodge has long been in a competitive battle against its domestic rivals, Ford and Chevrolet, but it took things up a big notch with the introduction of the Hellcat package in 2015, delivering what was then an industry leading 707 horsepower using a supercharged 6.2-liter V-8.

Originally offered only on the Challenger, the most classic of the Dodge muscle cars, the powertrain is now available on the brand’s Charger and Durango models – while also powering up extreme offerings from Ram and Jeep.

In the process, Dodge engineers continued tinkering with the Hellcat drivetrain to find more ponies buried within... 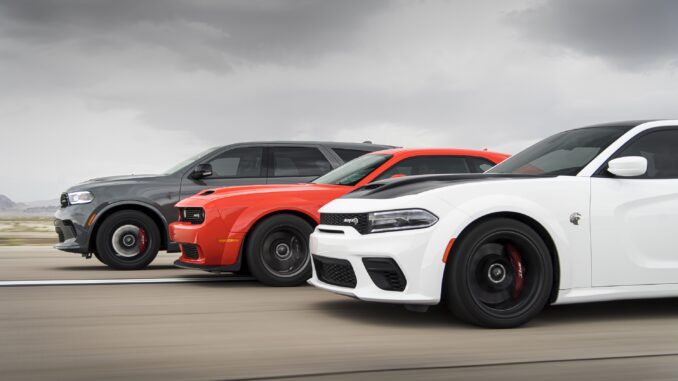 For 2021, three new models are worth noting. That includes the most radical of the packages, the Dodge Challenger Super Stock. The new model year sees it jump from 797 to 807 horsepower. It actually isn’t even quite up to the fastest and most powerful Hellcat ever produced, the 840 hp Demon model sold for just the 2018 model year. Nonetheless, the performance numbers are impressive, the Super Stock launching from 0 to 60 in a mere 3.25 seconds, Dodge claims, while turning quarter-mile runs on the dragstrip in a consistent 10.5 seconds, about 0.8 seconds slower than the Demon.

Like that limited-run model, the Super Stock is street legal, but “allows drivers to set up for maximum performance on the dragstrip,” said Munoz.

The front end has been lightened as much as possible, to put weight on the back tires. The wheels, in fact, measure 18 inches up front and 20 in the rear. They barely conceal  4-piston brake calipers up front, six-piston calipers in back. The suspension has been tuned to bias the real wheels, too. Meanwhile, a limited-slip differential and a 3.09 gear ratio help maximize power to the pavement.

Drivers will have the option of using Launch Control or Line Lock to get repeatable runs down the tarmac. And, when they’re done, the Super Stock introduces a “Race Cool-Down” mode that helps cool off the drivetrain. 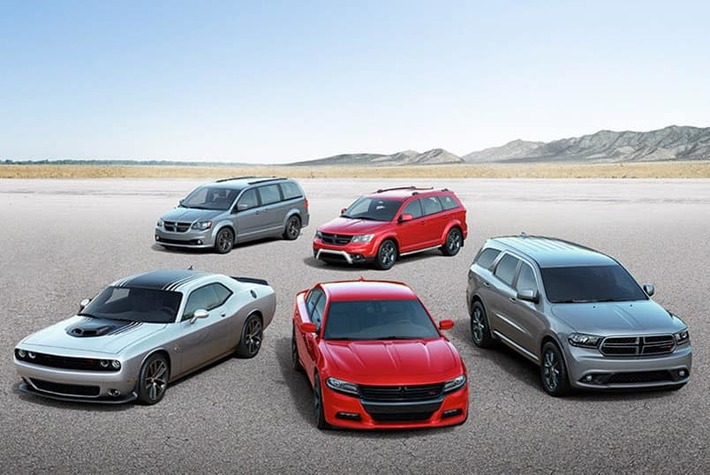 While not specifically targets for drag racing, the 2021 Dodge Charger Redeye also gets an upgrade for the new model year, power bumping up to 797 hp – compared to 720 for the “base” Charger Hellcat – and 717 lb-ft of torque. The Redeye update will still manage a 10.6 second run in the quarter-mile, according to Dodge, while topping out at 203 mph.

“This is for the crazier people,” Munoz joked, who want a family friendly four-door model that can also deliver muscle car performance. To help maximize the numbers, the 2021 update of the Charger Redeye features improved breathing, including dual front intakes and a hood scoop. The goal, Munoz added, was “to squeeze as much horsepower out as we could.”

When the latest take on the Dodge Durango was introduced, the Fiat Chrysler brand initially pitched it as a “man van.” But, with the introduction of a Hellcat drivetrain it takes on an entirely different character, that of “a 3-row muscle car,” suggested Munoz.

It took a significant engineering effort to shoehorn the supercharged 6.2-liter V-8 under Durango’s hood... Especially since the SUV version comes exclusively with all-wheel drive. The engine, paired with an 8-speed automatic still manages to deliver 710 hp and 645 lb-ft. It also features both Launch Control and Line Lock for consistent launches, and a rear spoiler provides as much as 150 pounds of downforce to hold the tail to the pavement at top speed.

Inside, however, the Durango is “a little more refined” than the rest of the Hellcat family, according to the Dodge brand boss. It’s also more high tech. Among other things, it features a new, 10.1-inch touchscreen using the latest iteration of FCA’s infotainment system. Dubbed UConnect5, it operates about five times faster than the previous-generation technology.

For those who see other uses for all that muscle, the Durango also boasts the ability to tow up to 8,700 pounds. All three of the Dodge extreme machines will be in showrooms before year-end. Note that each will carry an additional $2,100 in gas guzzler fees on top of their sticker price.

Above edited and re-posted from article written by Paul A. Eisenstein

Powered by the proven supercharged 6.2-liter HEMI Hellcat V8 engine delivering 710 horsepower and 645 lb.-ft. of torque, the Durango SRT Hellcat runs 0-60 mph in 3.5 seconds, has a National Hot Rod Association (NHRA) –certified quarter-mile elapsed time of 11.5, a top speed of 180 mph and runs 1.5 seconds faster than the SRT 392 on a 2.1-mile road course, equal to 9 car lengths after one lap.

Designed and engineered to appeal to muscle car enthusiasts who want even more — more power, more performance and more bragging rights at the drag strip — the heart of the new 2021 Dodge Charger SRT Hellcat Redeye comes from the limited-production 2018 Dodge Challenger SRT Demon. The supercharged 6.2-liter HEMI high-output V8 boasts 797 horsepower and 707 lb.-ft. of torque and is mated to a TorqueFlite 8HP90 eight-speed automatic transmission.

* Quickest Charger ever produced with a quarter-mile elapsed time (ET) of 10.6 seconds at 129 mph