Status People, a social media company, created a new social tool that apparently is able to spot out both "fake" followers as well as "inactive" followers.

They stated the reason for creating the tool in their blog:

The number of people buying fake followers on Twitter to look more legitmate is a growing problem. Essentially people are trying to game the system and convince people they have social legitimacy when they don't. They are Fakers and they are undermining Twitter.

Of course any third party app always has its complications, but our social team thought this one was pretty cool.

What are your results?

Tom/Tim - It definitely was more curiousity. I sent it around to some clients and some of the PCG team members and everyone was having fun running their names through along with some celebrities. I believe that celebrities definitely have fakes. There are always a lot of hashtags that go with celebrities especially someone like Justin Bieber, and "fakers" spam those hashtags. But a dealership isn't exactly a celebrity...although that would be the goal! I'll have to look at that article - I love Twitter but it seems to be something that people either are obsessed with and won't touch.

Timothy, I looked at this more as a curiousity than an actual business tool.  It would be interesting to know their methodology in determining fakes.  I note that Christine stated that it is a tool the "apparently" able to spot fakers.  I didn't look at her post as a testimonial for the tool.  The implications for Twitter would not be good if there are that many fakers.  There's an interesting article on HubSpot, Is Twitter a Dying Social Network? #MKTGdebate.

@Tom Gorham - Correction 26 million followers. And no its not surprising that someone with that kind of following would have some fakes. The point of the article is a tool that is supposed to give us some valuable insight. But it doesn't hold water. I question the credibility or validity of a tool like this when it suggests that 42% of someone's 26 million followers are fake.

If that is representative of the whole then this would suggest that a massive percentage of twitter accounts are fake. Remember, Justin Bieber is a great example because his following alone represents 13% of twitters entire world wide user base.

You're never going to get a better statistically valid sample. Based on that sample, this tool would have us believe that there are 84 Million fake accounts on twitter. If that is true, then really no one should spend any time even bothering to try and use twitter as a marketing or communication tool.

It's just simple math folks. If someone with 500 followers had 42% fake followers, then there is no hard sell. But for someone like Christine here to have 0% of her 1200 followers be fake but social media icons like Justin Bieber and Guy Kawasaki to have double digit percentages of fake followers just doesn't add up.

It's not surprising, Tom, that @applechevy would show the same result. They only have 1,797 followers and the tool is measuring 500 of them each time you run it. Unfortunately, and no one seems to be addressing this, 1,797 followers is not enough for influence to translate in to any tangible ROI.

A tool like this that actually showed real data would be great! It would totally validate our service. According to the tool it in fact does validate it! But I'm saying the methodology for said validation is flawed.

I just ran @applechevy again and it came up the same as yesterday.  As far as the Bieber, it wouldn't surprise me that someone with a million followers had a lot of fakes.. intentional or not.

Sorry, couldn't resist this one: 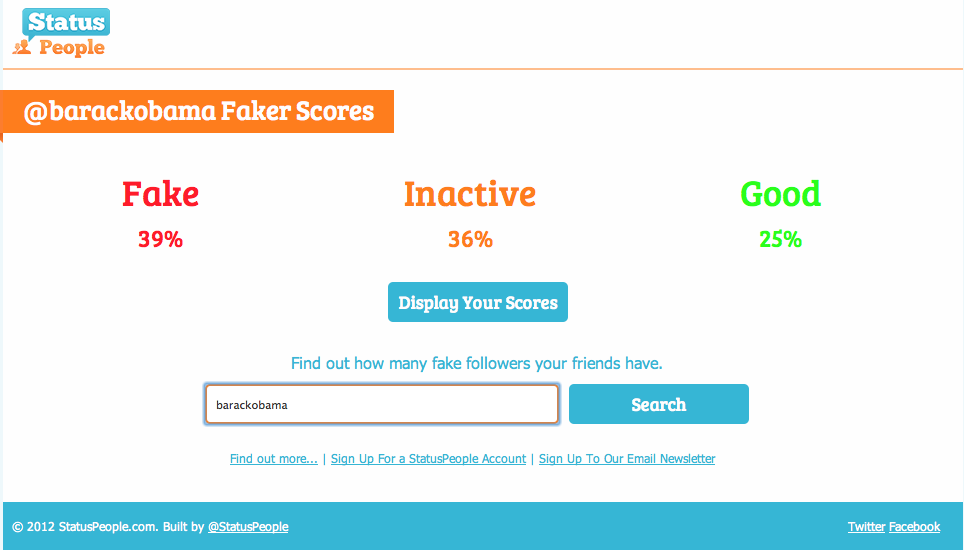 I have to say, I was actually a little excited that this tool might be for real. Wikimotive has a service designed to attract large social media fan bases. So a tool that could actually show that we get real fans, was at first quite seductive. But after doing a little research, I have to question the validity of this tool. Observe:

Just yesterday, Ralph posted his scores as 1% fake, 14% inactive and 85% good. And I think Ralph is an honorable, honest guy. Wouldn't most of us agree? So I don't think for a second that he lied. But look at what happens when I run the tool on his account today: 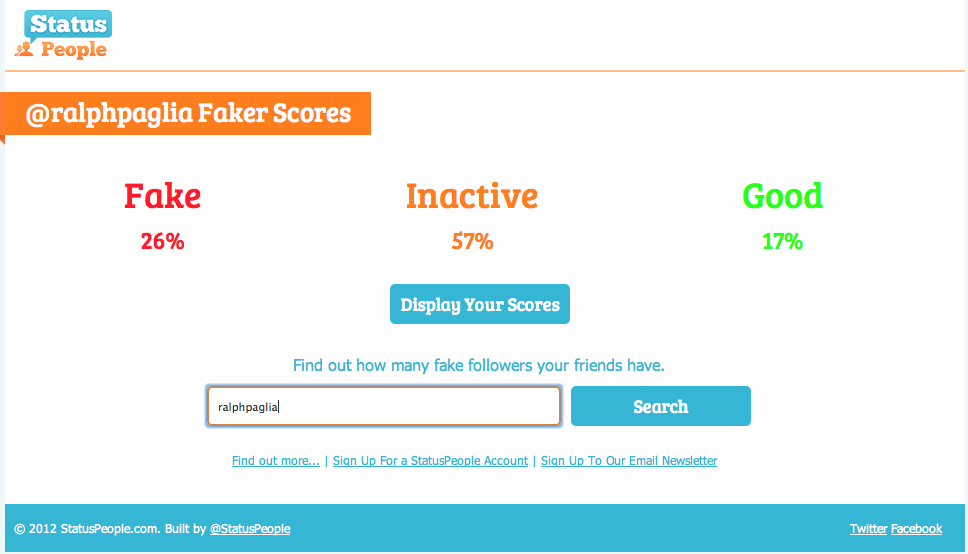 Well, maybe we can't slay Ralph just yet. Guess who else has a ton of fakers? How about the most socially influential person on the planet. Yep, I went there - Justin Bieber! I don't think the Beeb's needs to buy fake followers with over 25 million followers, but READ EM AN WEEP BIEBER FANS: 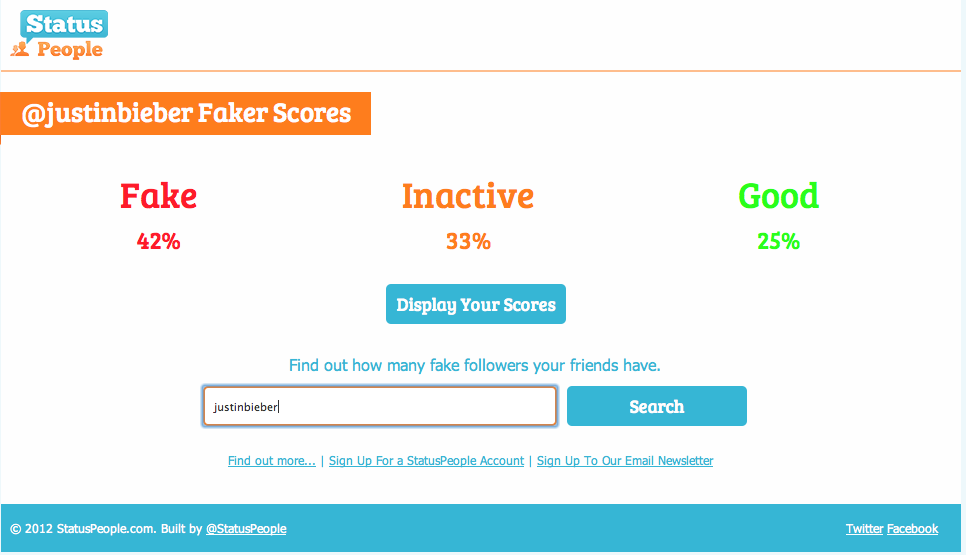 42% FAKE! can you believe it... Well, neither can I because that means he has 11,237,804 fake fans. Hmm... something smell funny here? Hold that thought! Let's look at another social media guru! Guy Kawasaki! Ever heard of him? 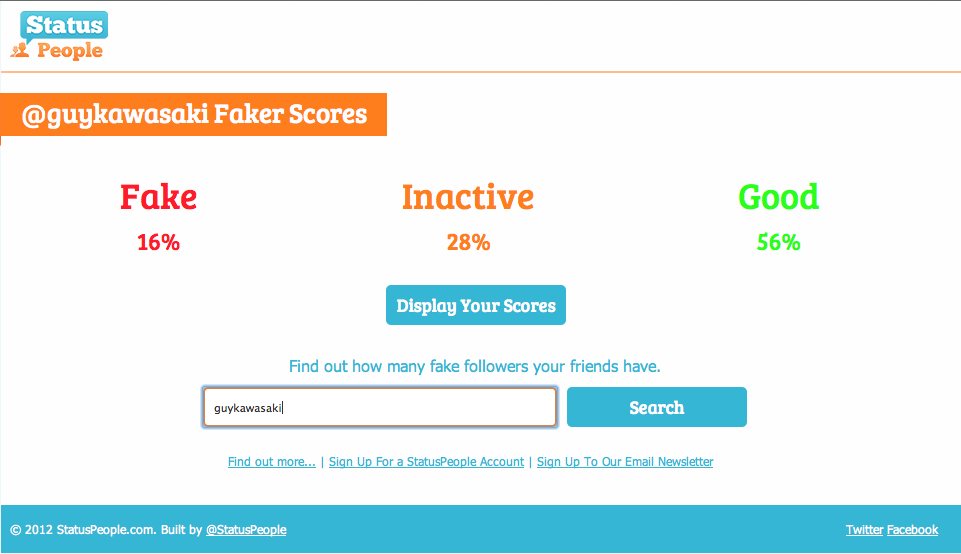 I'm not going to bog up the page with more pic's, but here's a few more...

Hey honestly, I would love to get behind this thing, because according to this tool (today) Wikimotive only has 1% fakers (out of 300,000 followers) and as much as I'd love to use that as validation that you can buy real followers from Wikimotive... It just doesn't hold water...

Hey its a new tool. I'm sure there are bugs. I'm sure they could use funding. Hell maybe twitter will buy it and plug it in to all followers instead of the weak random sampling of 500 of your followers. Ah... sample of 500 now it makes sense. After all, if you're Justin Bieber, whats 500 of 26,756,968 followers?

I guess I'm just an ol' car guy at heart, but I'm reminded of something my father used to say when one of our comptrollers was late with the month end statement... "figures lie, and liars figure..."

The good news is, you realize you're talking to real people, not just numbers.

Find out how many fake followers your friends have.