The automotive marketing research firm Dataium has released their 2013 Automotive Shopper Intensity Report which has become a respected and widely regarded accurate predictor of new vehicle demand in North America.

Each of the charts shown below are posted in the form of a PNG image that I created from the PDF version of the report. You can click on to open a browser window showing the full resolution for viewing and download. I have also included the PDF version of this report excerpt for file download by ADM Professional Community Members at the bottom... The following text, charts and tables are excerpts from the full report, which is available from Dataium for a fee by request. To request complete access to Dataium's ASI predictive modeling tool on future consumer demand by make, model, trim level, segment, region, and market, contact Dataium at www.dataium.com/contact, or call 877-896-DATA (3282).

The index was relatively flat in December, up by a mere 0.39%, indicating a slowdown in January. Based on this, Dataium forecasts the US Retail SAAR in January to be 12.2 million retail units.

"It wasn't a fiscal cliff but the market did slow." He added "However, the mitigation is consistent with past holiday incentives and clearance sales hangovers." 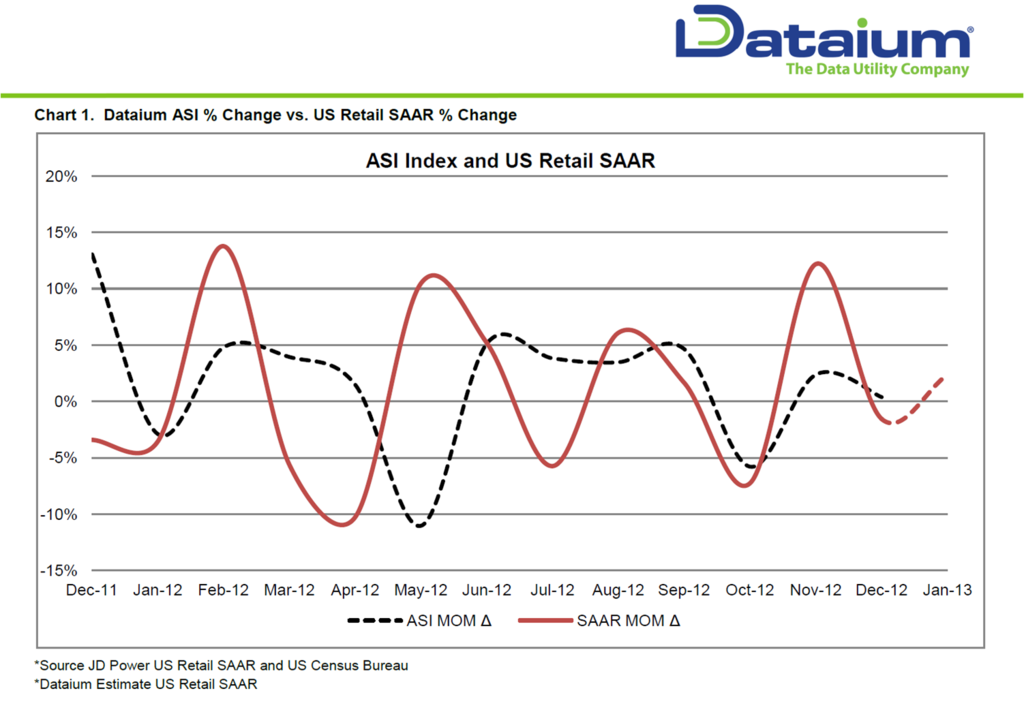 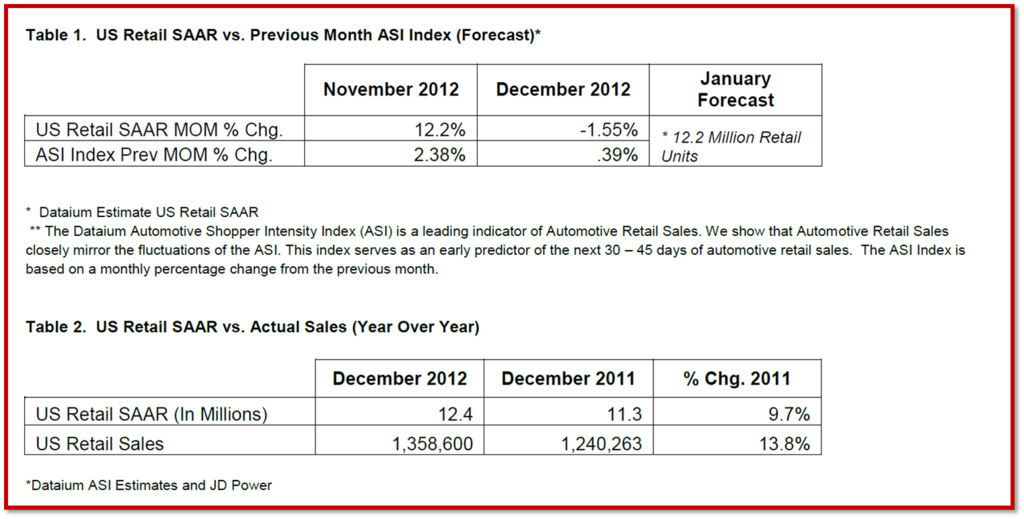 With regards to makes, Toyota continues to outperform both the domestic and import brands alike, with three models: the Camry, Tacoma and Tundra included in the top ten new vehicle ranking for three straight months. However, overall intensity around the brand has gradually declined, with each model dropping a spot or two in the ASI ranking since November. 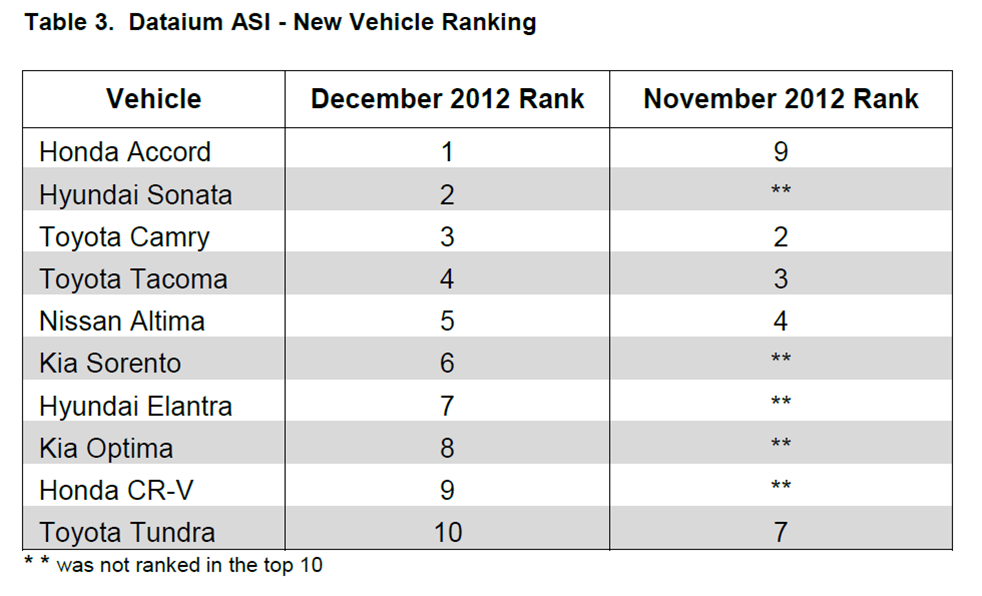 For a second straight month, shopping intensity for mid-size sedans remained high, with three models within the segment ranking highest in ASI for new vehicles. The report identifies intensifying interest for the Honda Accord, which rose from 9th place in December, to rank highest in new vehicle ASI this month. However, the Accord faces strong competition in the New Year from the Hyundai Sonata, which, for the second month in a row, exhibited one of the largest month over month increases in its segment, and ranked second in ASI for new vehicles. 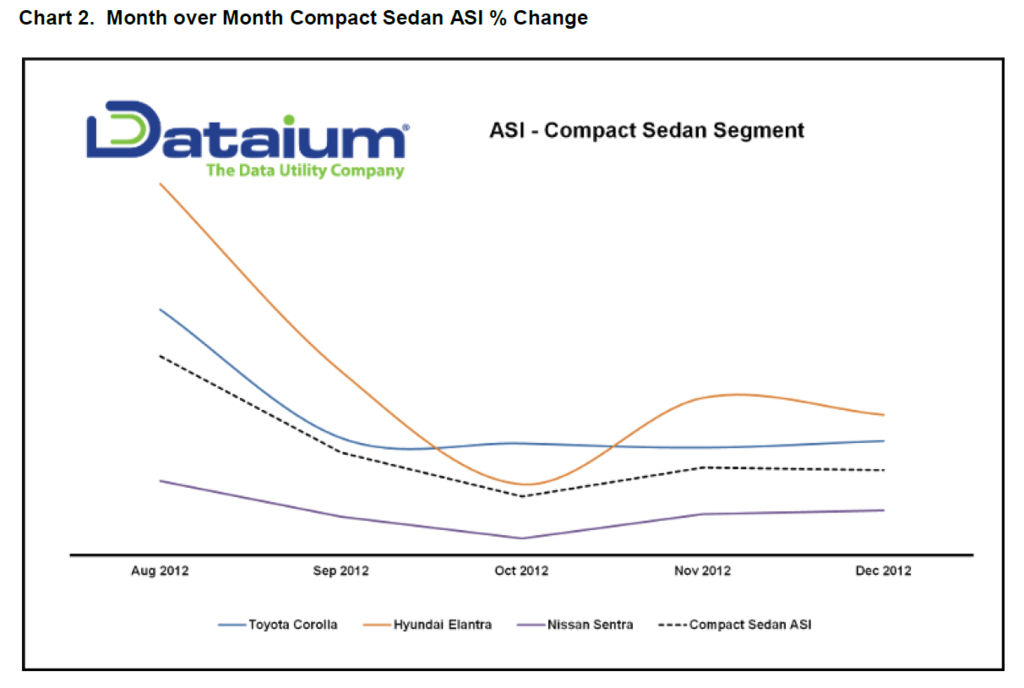 A notable entry to the top ten ASI new vehicle ranking was the popular compact sedan from Hyundai, the Elantra. For the past two months, the Elantra has outperformed much of the competition in the compact segment in terms of shopping intensity. The ASI report also indicates that despite a slight bump in shopper interest owing to a recent redesign, the Nissan Sentra still trails other compacts within the segment.

Download the PDF version of this Dataium report extract by right-clicking on the following link, then selecting "Save As":

It would be interesting to see this broken out by cars & trucks / suvs PLUS gas prices. I'd bet gas prices would closely mirror ASI index