Social Networking Eats Up 3+ Hours Per Day For Car Buyers 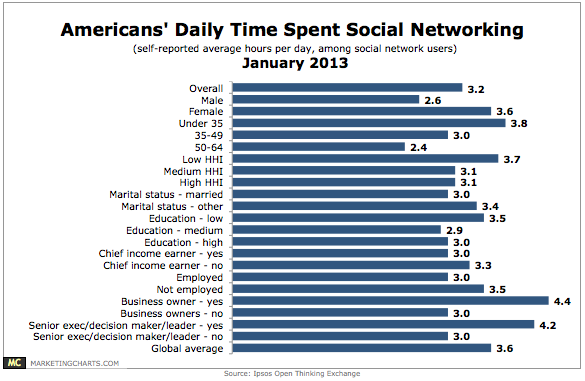 American automotive consumers aged 18-64 who use social networks say they spend an average of 3.2 hours per day doing so, according to new research released by Ipsos Open Thinking Exchange (OTX).

Specifically, among American automotive consumers who are social network users:

In terms of the gender difference, female social networkers spend almost 40% more time daily with social media sites than men (3.6 hours vs. 2.6 hours), a finding consistent with earlier research from MyLife and from Burst Media showing women to be more active than men on social media.

Some other interesting demographic gaps emerge from the Ipsos research. Those include:

The study breaks down actual hourly estimates per day, with some striking results. For example, roughly 1 in 5 users aged 18-34 claim to spend 6 hours or more per day social networking.

Looking across the 24-country sample included in the Ipsos research, some countries stand out in social network usage. Among social network users, Indonesians and Saudi Arabians spend the most time, at an average of 5.1 hours daily, followed by the Turkish (4.9 hours), Argentinians (4.7 hours), and Russians (4.6 hours). In fact, almost one-third of social network users in Indonesia report spending at least 6 hours a day socializing on social media sites.

On the other end of the spectrum, social network users in France and Japan spend the least amount of time daily, at an average of 2.3 hours.

Overall, 71% of respondents across the 24 countries reported using social networks for an average of 3.6 hours per day.