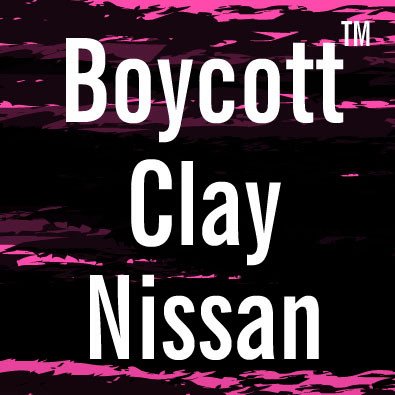 Social media represents a new dawn for the marketing industry. The level of interaction it enables between business and consumer is nothing short of revolutionary. Most would agree that this is a step forward; more communication is always preferable to less. However, it is not an avenue of communication that businesses can control, or even truly mediate. Social media creates a dangerous duality, in that it can make or break a business with equal aptitude.

Two brothers have started a boycott against their sister’s former employer, Clay Nissan of Norwood. Their sister, Jill Colter, has stage 4 brain cancer and they claim that she was wrongfully terminated by the dealership. Both sides have taken to social media to garner support, and now the issue is heading to court.

Jill took a two month leave of absence to recuperate from intensive whole brain radiation treatment. Once she returned to work, Jill felt she was completely capable of performing her duties and arrived on time or early every day. Just three weeks after her return, she was terminated. When she inquired about the reason, she was informed, “We are going in a different direction.”

Massachusetts has an At-Will Employment rule. This is defined as an employment relationship in which either party can break the relationship with no liability. However, there is also the U.S. Family and Medical Leave Act, which protects people’s right to take unpaid, job protected leave for as long as 12 weeks. To terminate someone’s employment as a result of illness covered under the FMLA can be regarded as discrimination.

Was Jill a victim of discrimination? Her family certainly thinks so. Her brothers, Jon and Adam Colter, started a Facebook page calling for the boycott of Clay Nissan of Norwood. The story went viral and exploded across the web. Their Facebook page’s about section states: “www.facebook.com/boycottclaynissan went live about five weeks ago. Since then we have received about 15,000 supporters. Private messages are in the hundreds.”

Once Clay Nissan got wind of the boycott page, they released this official statement: “With regard to the campaign against Clay Nissan of Norwood, we understand this is an emotional topic further fueled by misinformation and efforts to block communication from the Clay family. We encourage you to visit ClayFamilyCares.com to learn the truth about our actions. In short, we were aware of the employee’s illness prior to hiring her, and after learning of her firing we invited her back to work at our dealerships.”

According to the Boycott Clay Nissan Facebook page, this statement is far too little, and way too late. The Colters maintain that they received no such offer until the boycott was in effect for over three days, which was initiated about two weeks after Jill was let go. “This is Clay doing damage control, public relation, and spin and more spin,” wrote Adam Colter.

This is not the first time that a Clay dealership has engaged in questionable behavior toward its employees. Clay Nissan’s parent company, Clay Family Dealerships, Inc. was investigated for knowingly failing to pay owed overtime wages to employees. That investigation ended with Clay paying nearly $280,000 in back wages, restitutions and fees.

At this point in time, both sides have retained legal representation. The Colters are suing Clay for wrongful termination of Jill, claiming they violated the FMLA. At the same time, Clay is counter-suing the Colter brothers for defamation brought about by the boycott, with an emphasis on the content of the Facebook page.

Judging by the timeline and statements made on both sides, it is difficult to say who is telling the truth. The only thing we can be sure of is who is talking louder, and that is unequivocally the Colters. Their Facebook page is currently over 25,000 strong, including thousands of comments across hundreds of posts. Clay is trying to reach out via their ClayFamilyCares website and issued statements, but they are finding it difficult to compete with the wildfire spread of internet vitriol.

That may be part of the problem; the fact that Clay is trying to compete at all. Jon Colter has said that initially all they wanted was an apology but the dealership was unwilling to comply. Instead, the dealership has attempted to defend itself at every turn; as though any amount of PR could turn back the tides. The simple fact is, right or wrong, Clay has already lost in the court of public opinion; at some point, all that is left is to apologize and move on.

That is what can make this kind of social media campaign so dangerous to businesses; companies can lose a war that they are only peripherally aware they are fighting. Every day more people are seeing the Boycott Clay Nissan Facebook page. When they view the page, they are seeing the story as presented by the Colters. Clay can issue statements but each and every piece of information is filtered and posted by the Colters. The brothers also have complete control over comments on the page, meaning the Clay family cannot even defend themselves on the page that they are being attacked on. Is it fair? No. Are the Colters telling the truth? Evidence suggests they are, but in the end, it doesn’t matter.

In the world of social media, when a person fights a business, the roles are already cast. Despite any efforts to the contrary, despite who is truly right or wrong, the faceless corporation will be viewed as the villain. It is the innate characteristic of consumers to band together against a business who is being accused of a wrongdoing. We have all been there; when you hear a story of some big-box store screwing someone, how often do you even attempt to see things from the company’s point of view? It’s not often, and frankly, you shouldn’t have to try.

It is the onus of any business to maintain its own image in the eyes of the public.

This is what Clay Nissan, and the entire Clay family, needs to accept. They can go through the defamation lawsuit, and, as Jon Colter says, “They’re suing us, but it could be two to four years before the site is taken down, and by then, it will be at half a million.” The damage has been done. It was done the second that Facebook page went viral.

It’s unfortunate for Clay, but it provides an excellent example for other dealerships. Social media is no longer a supplementary part of your main marketing strategy. It deserves and demands constant investment to keep your business spotless in the eyes of your customers. When it comes to Clay and the Colters, we don’t know who is in the right and we’ll reiterate: it doesn’t matter!

If Clay had someone competent in charge of managing their social media presence, they would have known about this boycott page the second it went up. Once they knew about it, they could have apologized and moved the entire discussion out of the public eye before it caught fire.

Instead, they have a boycott, a lawsuit, and an ugly blemish on their company’s reputation. But hey, at least things posted on the internet aren’t there forever…right?
Original article about the Boycott Clay Nissan Facebook page posted on Wikimotive's blog under the title The Clay Nissan Boycott

Tim, it's just not my style so I wanted to say something about it since this is a highly indexing site.  I'm never a fan of information that adds SEO to the challenges of a dealer, even one who (apparently) makes this kind of mistake.  As to restricting information, in my 28 years of dealing with information, networking, and ultimately the Internet, I've found it's usually not only the information that damages but oftentimes an agenda around it.  Anyway, it's just my recommendation, aired now and acted on or not as anyone sees fit.  Thanks.

Doug its definitely a bad situation any way you slice it and I don't think any legal remedy the dealer seeks will offset the losses that could plague them for years to come.

I disagree keith. I'm not here to pass judgement on whether or not the dealer did or did not act appropriately. But they did make a huge mistake. The mistake was doing nothing until it was too late. If other dealers can learn from that mistake because one or many of these discussions shows up in search, then the greater majority benefit from their mistake.

They are pursuing legal remedy and if our courts find them not to be at fault, they have the option to promote that finding with even greater emphasis than that which was placed on this small thread or the multiples of threads out there.

I'm never a fan of restricting information from those that may be seeking it.

One thing I should've said here is that I've always asked (recommended) that these types of blogs are blocked from searches using robo.txt.  Whatever mistakes a dealer makes, I never want to make it worse by having a peer discussion of mine indexing.  Anyway, the DrivingSales version of this is already indexing, but I wanted to leave this point as food for thought for the future.  Thanks.

As a car guy, I'm questioning how this was allowed to reach this point and how much this will eventually cost the dealership.

From the emotional side, having a daughter that was diagnosed with stage 4 breast cancer at 30, I have little sympathy for the dealership.

thanks for the feedback guys and gal ;)

Thanks Tim!  Agree 100%, and I learned a few things from you, too.  Awesome article.

To me, the statement "Just because you can doesn't mean you should" says it all. Thanks for posting this Tim.

Wow, you're right about one thing:

"If Clay had someone competent in charge of managing their social media presence, they would have known about this boycott page the second it went up. Once they knew about it, they could have apologized and moved the entire discussion out of the public eye before it caught fire."