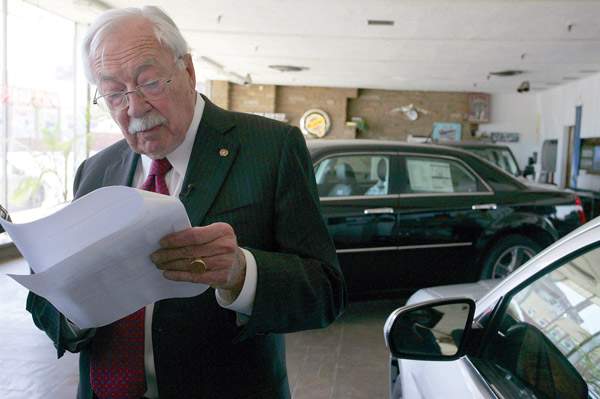 Standing in his Chicago showroom, 85-year-old Chrysler-Jeep dealer Stanley Balzekas Jr. reads a letter from the company notifying him that his franchise has been terminated. Balzekas Motor Sales Inc. has been selling Chrysler products since 1933.
Photo credit: FRANK POLICH/REUTERS

FROM: For Chrysler survivors: Relief, grim realizations
Written by Bradford Wernle
Automotive News | May 18, 2009
Edited for ADM by Ralph Paglia

At Chrysler dealerships that avoided the ax last week, nobody was throwing confetti. Yes, they had survived. And with a quarter of their same brand dealership rivals headed for oblivion by June 9, the stores that remain can look forward to a stronger competitive position in their local market areas.

But the problems that lie ahead are enormous:

-- Sales of surviving stores will remain well below those of top Asian brand competitors.

-- Fresh products from Chrysler's new partner Fiat still are at least a year and a half away.

And auto sales are still in the tank, with no relief in sight until the first quarter of 2010 when many economists are predicting an upswing based on 2 years of depressed sales not offsetting the math of scrappage rates.

"This is just one hurdle," says Kevin Wittrock, general manager of Wittrock Motor Co., a Chrysler-Dodge-Jeep dealership in Carroll, Iowa. "Now we have to survive until the new product comes 18 months down the line, and we have to survive this economy."

To be sure, Chrysler's plan to cut 789 dealerships is providing opportunities for some survivors. For instance, they can pick up franchises of rejected dealerships so they can sell all three brands: Dodge, Jeep and Chrysler.

Sid DeBoer, CEO of Lithia Motors Inc., a publicly traded dealer group, and the retail organization with the largest number of Chrysler stores, said last week that just two of Lithia's 29 Chrysler stores are on the cut list. He said he already had plans to close one of them. "Five of our stores will get additional Chrysler franchises," said DeBoer. "Almost all our stores have stores around them that are closing, so we'll have less competition." Lithia likely will convert the two doomed Chrysler stores into used-car lots. For now, the dealership group plans heavy advertising for going-out-of-business sales, says DeBoer.

But for the most part, life for Chrysler's 2,392 surviving dealerships will remain challenging after June 9.

Take sales per dealership. The automaker said last week that the 789 targeted dealerships accounted for just 14 percent of Chrysler LLC's sales. So the dealerships' demise will not release a large chunk of customers. Assuming companywide sales equal to 2008, the surviving dealerships would have average sales of 608 new vehicles, up from 457 with the doomed dealerships still on the roster. At the end of 2008, Toyota and Scion combined had 1,235 dealerships in the United States. They sold an average of 1,589 vehicles each last year.

The Obama auto task force, which is guiding Chrysler's restructuring, is using high-volume Toyota dealerships as its model, say sources who have met with task force members. Chrysler President Jim Press says Toyota's dealer strategy is "completely different" from Chrysler's. But Press, a former Toyota executive, says Chrysler needs to improve volume and profitability at its dealerships. Press says the average dealer lost $3,431 in 2008, compared with an average profit of $190,000 in 2007 -- which wasn't a great year, either. Says Press: "You can't compete in a market where the facing competitive dealer may be making $2 million or $3 million a year."


New products are another problem for survivors. The automaker is planning six new products derived from Fiat vehicles, but they won't arrive until 2011 and 2012.

Although Bob Shuman, owner of Shuman Chrysler-Jeep in Walled Lake, Mich., is relieved to be on the survivor list, he is still worried. He would like to add Dodge, but there isn't an available Dodge franchise nearby.

GMAC, Chrysler's new captive finance company, has approved Shuman's application for retail financing, but his wholesale application is still in the works. "I can't add anything to my floorplan right now," he says. "All I can do is pay them [Chrysler Financial] off."

The survivors also face a potential glut of inventory being released by dying dealerships. Chrysler says the 789 targeted dealers last week had 44,000 vehicles in stock. On May 1, all of Chrysler's dealerships had unsold inventory of 336,900 vehicles, enough to last 114 days at April's selling rate. A 60-day supply is considered ideal.

Chrysler says that with all its factories temporarily closed, high inventory will decline and won't trouble surviving dealerships.

Jim Appleton, director of the New Jersey Coalition of Automotive Retailers, says, "If you're a dealer who has made this cut, it's a real gut check to decide if you want to double down and stay with this," Appleton says. "If you're on the list of survivors, you may be asked to invest in additional facilities and inventory."

Donna Harris contributed to this report

The Automotive Digital Marketing (ADM) Professional Community is an online resource built on a perpetually growing "Viral Expansion Loop" Networking Platform and serves Car Dealers, Dealership General Managers and their management teams, including Internet Sales Managers, BDC Managers, Marketing Managers, Sales Managers, Service Managers, Service Advisers, Parts Managers, Fixed Operations Directors and their teams. Launched at the beginning of January 2008, and reaching over 2,500 active automotive professional members, ADM has emerged as a valuable and proven resource for the entire spectrum of automotive marketing and Internet sales related professionals. Interactive Media and eCommerce Professionals at car companies (OEM) and tier 1 and 2 advertising agencies who want to see, hear and read what the best Digital and Interactive Marketing professionals in the automotive industry have to say about relevant and timely topics visit ADM on a regular basis or subscribe to the many RSS feeds and content syndication services available within the ADM community.

Influencer Comment by Ben W. Plymale on June 3, 2009 at 9:34am
To any GM or Chrysler Dealer receiving notice of dis-franchising their Dealership from the Factory, I may be able to provide suggestion, assistance and guidance, please see below.

I'd appreciate your reply with any comments and/or suggestions. -- Ben Plymale

My background is General Motors, Corporate - Dealer Auditor last twelve years prior to 9/1/95 GM retirement; now I provide Automotive Dealership Consulting. I spend a week in a Dealership reviewing both Service and Sales Departments, looking at the operation as if an Auditor, providing Dealership a full report indicating potential problem areas found and method to correct before a Corporate Audit might occur. Report is presented as if it were the closing of a Corporate Audit. Also, I am able to assist with obtaining outstanding Factory Sales Incentive and/or Service Warranty claims.

Any Dealer having experienced a Factory Audit would probably agree, Audits are not a ‘fun thing’, I have been there - done that, never enjoyed doing them! Now as a Dealership Consultant, helping Dealerships stay away from Factory Audits and/or assisting Dealers with taking Exception to an Audit; I enjoy, and Dealers say “thank you, please come back!"

This is my tenth year as a Consultant, enjoying what I’m doing. I have been into 200+ Dealers; back to many of those Dealers with a follow-up. Manufacturers will always perform Dealership Sales Incentive and Service Warranty Audits (utilizing various ways and methods); I hope Dealers will continue utilizing and benefiting from my services. My Consulting services are applicable to all Dealerships, both domestic and import. Extensive travel is not a problem.

I like working with Dealerships, my information and assistance helps Dealership Management with Department training, resulting with a more efficient operation. I would appreciate opportunity to provide my Dealership Consulting service to your Automotive Dealership.

Strengths:
BUSINESS CONSULTANT - Ability to analyze financial data and other business information
to determine potential weakness and provide constructive suggestions to improve
0A efficiency and output, enhancing the business operation.
CUSTOMER SERVICE - Relate well with individuals of all ages and backgrounds.
Deals effectively and professionally with the public.
SALES - Able to confidently promote and sell variety of products and services.
A quick learner, especially pertaining to product knowledge, new procedures and
concepts. Experienced in special merchandising activities and inventory control.
Familiar with cash handling an d other monetary transactions.
SUPERVISORY SKILLS - Experience in training and supervising others. Self-starter, able
to work with minimal supervision. Dependable, responsible, and reliable.