Since Facebook has exploded, businesses have all rushed to capture their audience’s attention and leverage the platform’s marketing potential. In the beginning, gaining business exposure on Facebook’s platform was relatively inexpensive. As Facebook continued to modify its algorithm to appease its users and better monetize the platform when it went public, Facebook page organic reach plummeted to where it seems to currently offer organic reach to about 1-2 percent of any given page’s fans. Pay to play has been in effect for some time with the only ways for pages to extend reach being via Facebook ads or engaging content. That, however, hasn’t stopped some dealers from continuing to post vehicles for sale on their Facebook walls even at the risk of alienating their audience.

The question of the day is: Do people actually shop for cars on Facebook’s platform?

In the past, it’s fair to say that consumers who were using Facebook in their car shopping journey were probably researching dealerships. Some dealers had their inventories tied into their Facebook pages through a tab, but it was infinitely more convenient for a consumer to browse inventory through a dealership’s website or a third-party listing service than it was to visit prospective dealership’s Facebook pages one at a time.

That all changed with the roll-out of Facebook Marketplace.

In the beginning, Facebook Marketplace was designed to be more of a virtual garage sale / classified feature available for users to buy and sell items locally. As it has evolved, however, it has become a much more robust marketplace. This, of course, has attracted Facebook users who are increasingly using the feature in their shopping. In the automotive world, industry vendors have begun automatically sending dealer’s inventory to Facebook Marketplace, and Facebook itself has struck deals with major third-party listing sites like Cars.com to have a dealer’s inventory published making it very convenient for car dealers to have updated inventories available for exposure to Facebook’s massive user base.

But are consumers actually using Facebook Marketplace to shop for cars?

As a technology provider that facilitates conversations between consumers and dealerships in managed chat and also offers that feature within the Facebook platform, we can tell you that consumers are, in fact, engaging with dealerships about individual vehicles.

In Q2 of 2018 alone, 250 dealerships that use ActivEngage managed chat for Facebook via Messenger received 11,030 engagements from consumers originating from a VDP on Facebook Marketplace. 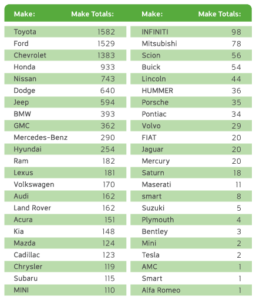 The table above illustrates that consumers are engaging with not only a wide spectrum of vehicle makes but also with a large span in vehicle age. These 11,030 consumer-initiated engagements encompassed a whopping 506 different model vehicles as well. This tells us that consumers of all types, budgets, needs, and interests are perusing Facebook Marketplace within their car buying journey.

Just as with any other consumer touch point, dealers need to be ready to engage with consumers, answer questions and start to build that relationship. Consumers only have so much time and patience, so failing to respond or engage the customer will only see that customer move on to the next vehicle or dealership — costing sales. On the opposite end of the engagement spectrum, dealers who are quick to respond, and are transparent and helpful have a higher chance of earning that customer’s business.

Consider that these figures only represent the data from consumers who chose to initiate contact with the dealership via chat. It’s safe to say that there are many more consumers browsing vehicles on Facebook Marketplace that did not engage but rather went into the dealership to see a vehicle of interest.

Facebook Marketplace is a valuable asset that dealers should be utilizing to gain exposure for their inventory. With inventory listings being automated through data providers that almost every dealership already uses in combination with Facebook’s third-party listing partnerships, Facebook’s Marketplace has morphed into a legitimate shopping destination for consumers in the market for a vehicle.